A couple that played musical chairs with allegedly stolen luxury cars was arrested in suburban Salt Lake City following a carjacking and police pursuit after one of the cars drove over a “stop strip” tire deflater and the other was a Jaguar suffering from mechanical problems.

Police arrested Brock Hansen, 33, and Brittney Price, 23, on Sunday in Taylorsville, Utah, following the incidents, which were reported by local media and spotted by Jalopnik.

They began, police say, when an officer out on patrol spotted what he suspected was a stolen BMW. The officer began to trail the car to run the license plate numbers when the BMW came to a stop to pick up a man, later identified as Hansen, who was walking on the street. The officer then continued to follow the car, was able to confirm that the BMW was, in fact, stolen, and called for backup.

Police at one point used a stop stick — a triangular tube filled with tire-puncturing nails — to try and stop the duo, but Price instead made a U-turn after driving over it and continued on with a deflated tire. She eventually pulled into a gas station, where surveillance footage shows Hansen exiting the vehicle, walking over to what appears to be a Jaguar X-Type sedan whose driver was standing at the pump, climbing nonchalantly into the drivers seat and taking off, following the stolen BMW.

Price eventually stopped and exited the BMW to try and get into the Jaguar but was apprehended by police after a brief foot chase and scuffle that left an officer injured, KSL-TV reported. Hansen then took off and led police on a chase — “at relatively low speeds,” according to ABC4.com — before he stopped the car and surrendered to police without a fight. Both were taken to jail.

“What we learned from the owner of that Jaguar is that he’s been having some issues with that Jaguar and he believes that the Jaguar just wasn’t going to go anymore and was bogging down … so may have picked the wrong vehicle to try and run from the police in today,” Unified Police Department of Greater Salt Lake Sgt. Melody Gray told ABC4. 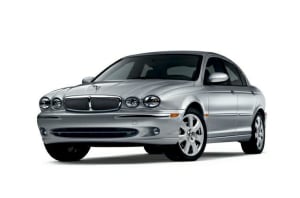