Automaker in transition may soon be down to two models in the U.S. It's been hard to get a reliable prognosis concerning Alfa Romeo in general, and especially hard to figure out what's in store for the brand in the United States. Last year the automaker canceled the 4C coupe, last week the brand's future product roadmap appeared to deep-six the anticipated GTV and 8C sports cars in order to focus on more efficient spending in more important segments. In February of this year, Alfa Romeo launched the 4C Spider Italia in a run of just 15 units, the two biggest surprises about that car being the $73,495 price and the fact that it extended the model's run into 2020. We're not yet into 2020, but it looks like the party's over. The French outpost of Motor1 is said to have confirmed with Alfa Romeo that the 4C Spider has ceased production. According to the report, the only 4Cs left across the Atlantic are the ones currently in dealer inventory.

Autoblog asked Alfa Romeo to confirm the news, a spokesman responded by e-mail, "I can't speak for other markets but the US 4C Spider is not cancelled and is still available for order."

Introduced in 2015, the 4C Spider still gets on with a turbocharged four-cylinder putting out 237 horsepower and 258 pound-feet of torque. The 4C Spider needs an irrational generosity to love and drive every day, but the last OEM sports car on sale without power steering knows how to thrill when pushed. Our guess is that, overseas, exotic construction and communicative, go-kart handling couldn't make up for a high price relative to the established competition and lack of interior amenities and ultimate refinement.

If the European news is true, sales figures lead us to believe it is but a matter of time before the same ax finds its way to the U.S. Alfa Romeo sold 421 4Cs in Europe last year, compared to 238 in the U.S. This year European dealers sold 196 units through the end of September, U.S. dealers moved 127. If we did lose the open-top sports car before 2021, the move would leave the Giulia sedan and Stelvio SUV as Alfa Romeo's entire U.S. lineup until more crossover-type vehicles show in 2021. No matter what happens, perhaps by 2021 Alfa Romeo will know precisely where it needs to go and have a clear plan for getting there, and perhaps it will be able to do so with the platform and financial resources within a merged Fiat-Chrysler-PSA Group entity. Even for fun, full-throated products, it's hard to get on in today's market without full-throated focus, support, and marketing.

In the meantime, anyone in the market for 4C Spider is advised not to dally. 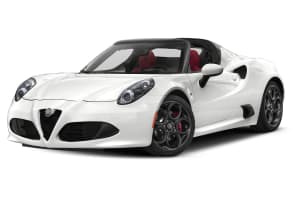