The two Alfa Romeos we’ve been looking forward to most don’t appear to have much of a future anymore, according to a report from Automobile. Both the 8C and GTV no longer exist on Alfa’s product roadmap, and Mike Manley suggested they were canned, as well.

“In the near term, the new portfolio for the brand is significantly scaled back with a corresponding reduction in capital spending,” Manley said, referring to Alfa Romeo in the company’s third-quarter earnings call. We've asked FCA if it can explicitly confirm anything on the 8C and GTV, but it offered no comment on the report.

Additionally, FCA’s presentation (uncovered by Motor1) of future Alfa Romeo vehicles left the 8C and GTV off the list. The only new cars planned for the future include a production version of the Tonale crossover and another unnamed crossover. FCA’s presentation also states: “brand to focus on current market strengths with reduced global reach and overlap with other Group brands.” 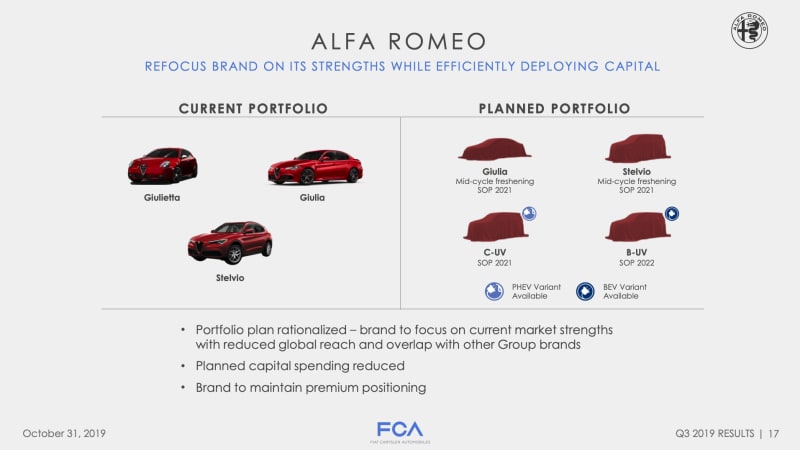 We all know that the strength of the market is in crossovers right now, so it’s easy to infer what happens from there. Expensive, luxury sports cars are not where the scale and money is at for Alfa Romeo, a brand that isn’t exactly thriving from a sales perspective today. Sales for both the Stelvio and Giulia are down in 2019 as those cars exit their honeymoon phase. Alfa is expected to have a midcycle refresh ready for consumption in 2021, so perhaps that could provide a temporary boost in sales for the Italian brand.

FCA also said it’s reducing planned capital spending on Alfa Romeo, which could hurt the brand even more in the future. This earnings call came the same day that the FCA-PSA merger was announced, throwing another wrench into the plan. We’re not yet sure what the merger will mean for Alfa Romeo and its presence in America, but we imagine more news on that will be coming as the companies transition to this new life together.

The Giorgio platform appears to be safe for the time being, as Manley expressed his intentions to keep it around. This platform (underpinning both the Giulia and Stelvio) was developed with electrification of the powertrain in mind, so it’ll be capable of handling a number of electrification efforts in FCA’s future. We only wish the promising 8C and GTV would’ve made it to production, but even Alfa appears to be thinning the herd of cars in favor of crossovers.