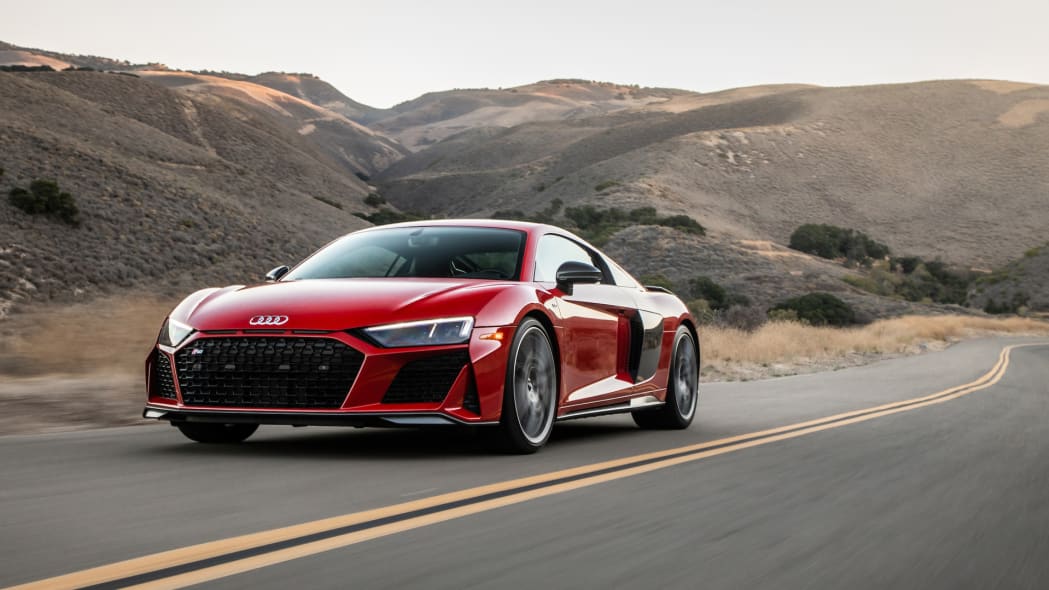 SANTA BARBARA, Calif. — It’s usually a bad sign: Rocking out of Los Padres National Forest in the updated 2020 Audi R8, I spot two California Highway Patrol cars lying in wait on Highway 33, one of the fantasy driving roads the state is known for. But these officers aren’t here to hand out tickets, but to lend a hand — closing off the road so we can run repeated launch-control starts in these mid-engine, all-wheel-drive supercars.

The drag-racing demo, in both coupes and Spyder convertibles, highlights reasons why one might drop $197,150 on the R8’s V10 Performance edition, or $209,350 on the Spyder V10 Performance. (They replace last year’s V10 “Plus” models). One is the 602-hp, naturally aspirated 5.2-liter V10. It’s a spectacular anomaly in a world dominated by turbocharged powerplants, the last of two production cars in the world with a V10. The other is its Italian cousin, the Lamborghini Huracan. Audi powers its R8 LMS race car with the identical V10, and both R8 coupes and racers are built on the same assembly line.

We stand in awe as Audi after Audi crackles off the line and sprints into the distance, rending the air with throaty howls en route to a wicked 8,700-rpm redline. (A Sport exhaust button that amplifies the sound is right there on the steering wheel, and owners are likely to wear it out). Audi plays it cool with a conservative 3.2-second 0-60-mph estimate for the R8 Performance coupe; 2.9 seconds is closer to the truth, as achieved in previous tests of the R8 in this engine spec. The Spyder is estimated to run only a tenth slower to 60 mph. Both models deliver the 200-mph bona fides of a self-respecting supercar, at a 205-mph peak for the Coupe and a hair-mussing 204 mph for the Spyder.

The 2020 update also brings a healthy 30-horsepower bump for the base R8 coupe and convertible, from 532 to 562 horsepower, and eight additional pound-feet of torque, now at 406 pound-feet. Audi pegs their 0-60-mph dashes at 3.4 and 3.5 seconds for the base coupe and Spyder, respectively, and sets their prices at $171,150 and $183,350. There’s also a coupe-only Decennium edition, limited to 222 copies, with the final 50 coming to the States. It’s a trim package that comes only in Mythos Black paint and all-black interior, with an intake manifold and wheels in matte-bronze finish and side blades, rear wing and other components in gloss carbon fiber.

On the 2020 design front, a reworked front bumper features a more horizontal perspective that accentuates the Audi’s lowness and width. That includes a dramatically stretched, black honeycomb grille, a new spoiler lip and lateral air intakes. That front end now incorporates a faux, winged inlet that bookends the bumper — and whose plastic-capped “opening” seems more from the Lexus school of overworked design than Audi’s typical understatement. Headlight lenses have been darkened, and a redesigned rocker panel gets a new inlay. Audi’s Laser Light high beam is standard on Performance versions, and their crisp, ultra-long-range illumination steps in for conventional high-beams at speeds above 40 mph. The Laser Light’s decorative blue element illuminates on European-market models, but U.S. regulations forbid any trace of blue lighting. 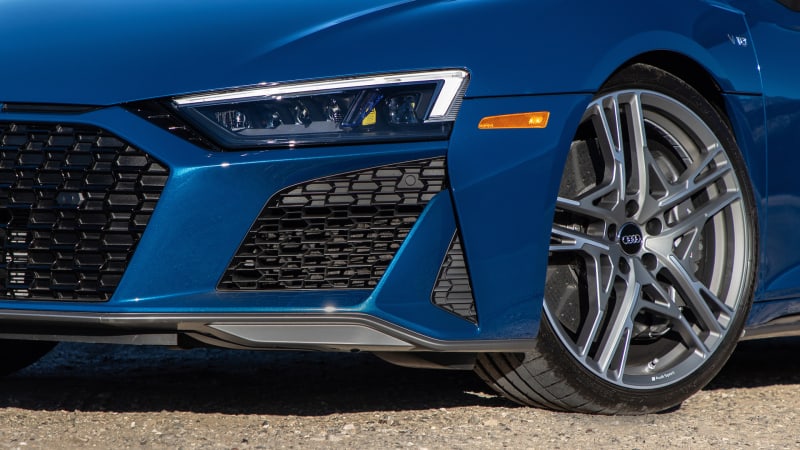 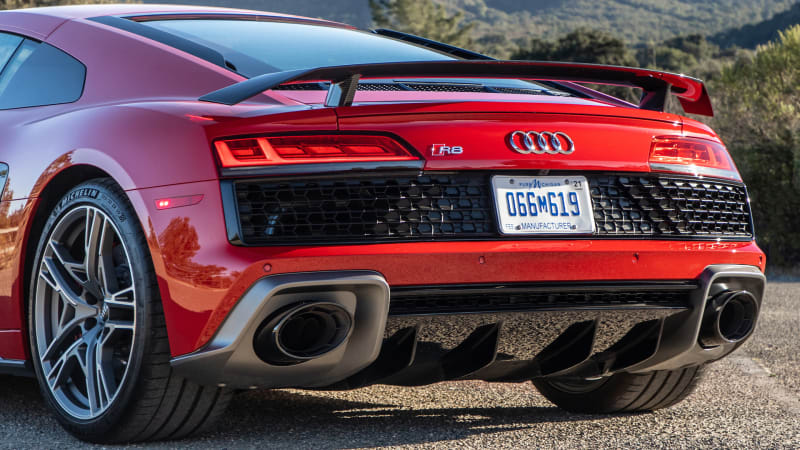 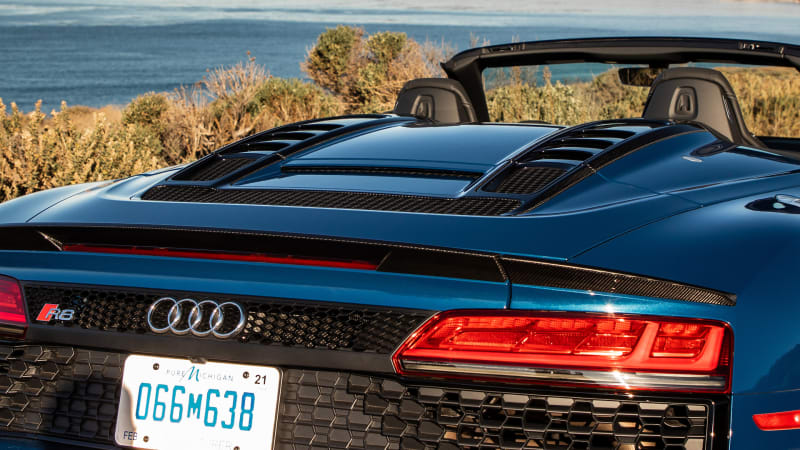 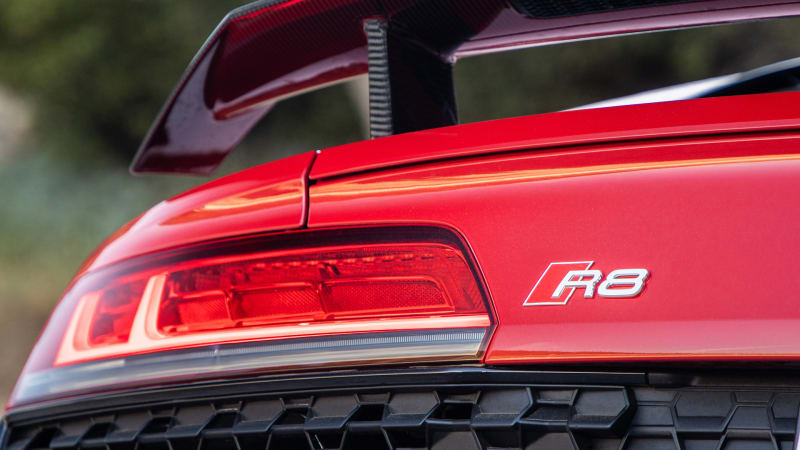 Two lovely new colors join the R8 palette: Kemora Gray and Ascari Blue metallic, the latter only available on V10 Performance cars. Ceramic brakes, standard on V10 Performance models, offer a choice of red calipers in addition to standard gray. Finally, the Performance coupe alone offers a world first for Audi: a carbon-fiber front sway bar that trims 4.4 pounds of weight. Every little bit helps for the R8, a relatively chunky sports car — especially compared with carbon-fiber monocoque McLarens — that plops as much as 3,957 pounds on the scales (for a base Spyder). All told, the wide-flanked R8 looks familiar, yet formidable, its ability to draw admirers undimmed by time.

Our day begins in Santa Barbara with a Spyder Performance, its fabric top down and its wind-deflecting rear glass up. After heading along coastal Highway 101, we’re soon detouring into California’s bone-dry, tinderbox canyons, even as fire crews battle new blazes in nearby Los Angeles. The Audi saves its scorching for the pavement, as I dial its dimpled, asymmetric steering wheel and get into a nice rhythm through the twisting mountain roads.

This R8 is dearly priced by any standard, but you get what you pay for in the high-design interior, decked out with carbon fiber, burnished aluminum and diamond-stitched leather on 18-way power sport seats. Racing-style shell seats are available, but those aggressive chairs don’t seem to fit the Audi’s daily-driving personality. Audi might disagree, considering the R8’s impressive race record, including three wins at the 24 Hours of Nürburgring. 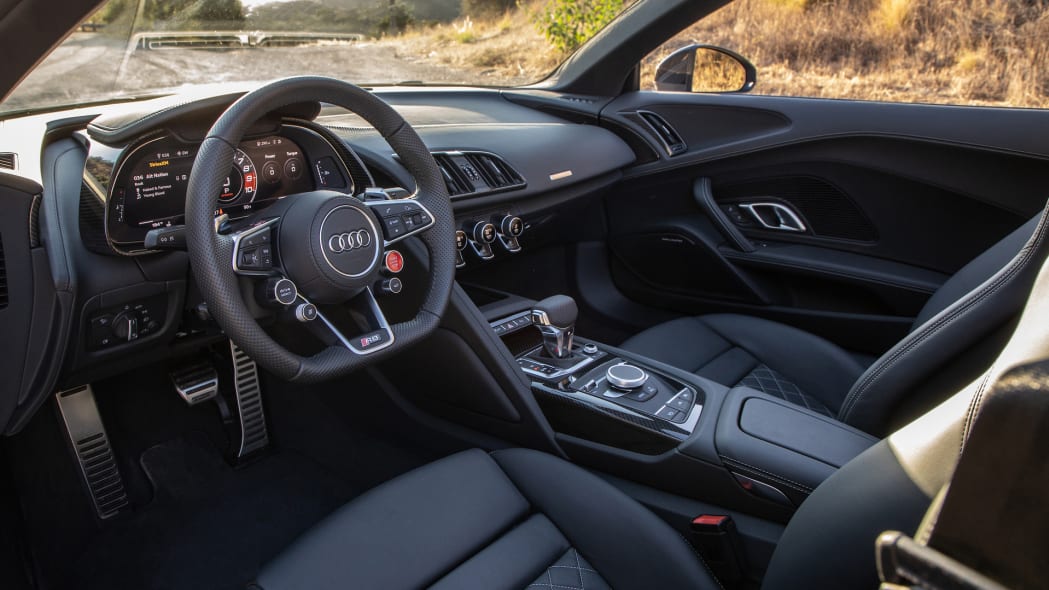 That personality combines accommodation and excitation like few cars; the R8 helped create the notion of the “everyday supercar," and its precision build quality and user-friendly technology remain strong points. That extends to Audi’s Google-mapping virtual cockpit infotainment system and 13-speaker Bang & Olufsen sound system (standard on Performance models), which continue to set the standard in its class. If all-black Audi cabins strike you as boring, Pastel Silver or Palomino brown are new interior colors.

The Spyder looks sweet top-down, and admits more of that glorious 10-chamber orchestra, but those advantages don’t seem enough to overcome its drawbacks: a shortage of seat travel (the chairs wedge right up against the rear firewall), and the attendant lack of useful recline from the seatbacks. The coupe, in contrast, carves out room behind seats for small bags, backpacks or odds-and-ends — not a ton, but enough to make a difference in a car that’s otherwise limited to a modest frunk below the hood. And where the coupe proudly exhibits its signature V10 under glass, topped with a black X-brace, the Spyder’s engine stays out of sight below its vented, power-folding tonneau cover.

As it’s evolved, the R8 has steadily become more rewarding to drive, less victimized by understeer and more limber-feeling at the helm. For 2020, the electrically assisted steering reduces the assist during cornering to deliver more weight and feedback though the wheel. Optional Dynamic Steering (at $1,400) aims for more-natural feel as well, with less-aggressive ratio adjustments relative to vehicle speed and steering angle. 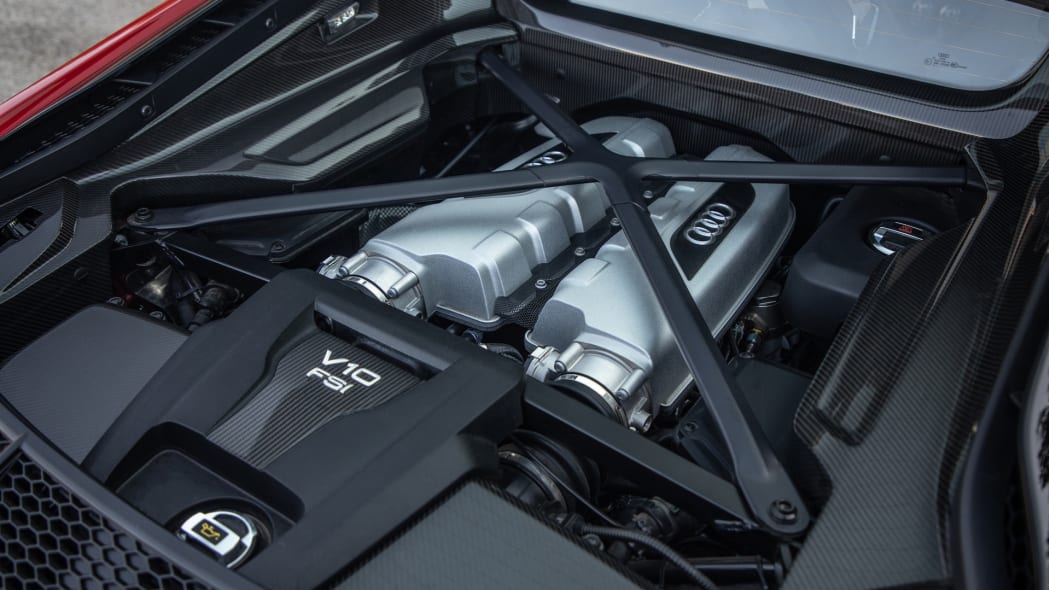 Where standard models come with a versatile, adjustable magnetically controlled suspension, Performance editions get a stiffer, fixed steel suspension for superior control, though with a notably firmer ride. For 2020, Audi has traded the R8’s previous Pirelli P Zero tires for a grippier set of Michelin Pilot Sport 2s with a custom rubber compound. (You’ll spot a little “AO” symbol on the sidewall, for “Audi original”). Stability control and ABS programming are mildly retuned to account for the improved grip, and the (optional) variable-ratio steering makes subtler ratio adjustments than before. Throw in a seven-speed dual-clutch S-Tronic transmission — which Audi says can swap speeds in as little as 120 milliseconds — and it’s a delight to rip through those gears to the tip-top of redline, whether in full automatic mode or by thwacking the finely weighted, metal paddle shifters. Hold that left paddle down, and the Audi will limbo to the lowest possible gear, skipping from, say, fifth gear to second in one swoop. This is an extremely short-geared car, with second gear topping out at around 67 mph, and fourth gear running out at barely 105 mph.

On one long, canyon-blasting descent, I employ left-foot braking to balance the Audi into blind apexes, then roll onto the throttle and feel the Haldex-based front axle come online, maximizing grip and exit speed as I hurtle toward the next corner like a barrel over Niagara Falls. This is one fast, confident sports car, and its V10 gushes power and never quits, as evidenced by that 200-mph-plus top speed.

The R8 still makes a vivid statement of design and performance, yet it’s always run a bit below the radar, including in sales. Since its debut in 2007, Audi has moved about 800 R8’s a year in America on average, including a high-water mark of 1,145 cars in 2011.  This is a supercar for a more practical-minded, German-favoring buyer, a contrast to the flashier form and naked emotionalism of the Lamborghini Huracán. Those Audi fans are just the type to do some practical math as well: The standard R8 Coupe undercuts the Huracan Evo’s price by about $90,000. 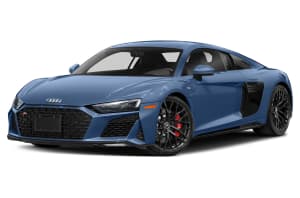