700 and 600 hp, respectively, with electrification across Alfa lineup

Reese Counts
BOLOCCO, Italy — There were grand plans for Alfa Romeo at FCA's last five-year plan. By 2018, we were supposed to get eight new products, including a new "specialty" vehicle. In reality, we've gotten the Giulia and Stelvio. At this year's follow-up, Alfa Romeo brand head Tim Kuniskis called the last plan ambitious, but he offered a new vision that was both more realistic and more far-reaching. Beyond doubling down on utility and electrified vehicles, by 2022 Alfa has plans to revive both the 8C and GTV names as high-performance hybrids.

Since 2014, Alfa sales are up 160 percent, with an estimated 170,000 vehicles to be sold in 2018. The North American market counts for 16 percent of that, up from nothing back in 2013. Future products will focus on Alfa's current strengths: styling and performance. Look for new compact and full-size utility vehicles to slot on each side of the Stelvio. Plans for a larger sedan seemed to have been nixed, though a long-wheelbase version of the Giulia will make it to the ever-increasing Chinese market.

The most exciting news obviously comes from the return of the 8C supercar and GTV sports car. We have few details, but what we do know looks promising. The 8C will use a carbon-fiber chassis with a mid-mounted twin-turbo V6. More than 700 horsepower will be sent to all four wheels thanks to an electrically-driven front axle. The car should hit 62 mph in fewer than 3 seconds. 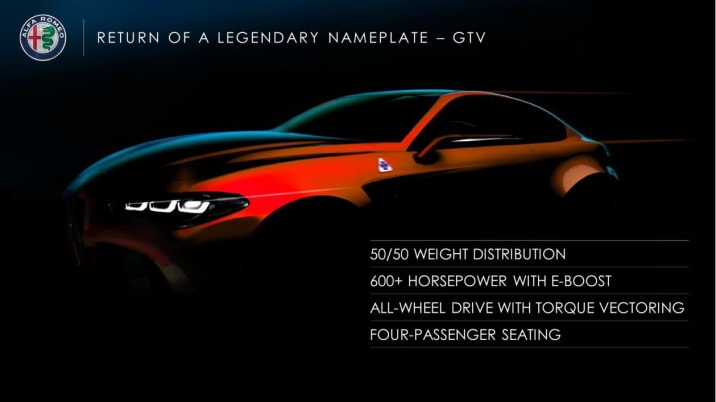 The GTV will be slightly more tame, though Alfa is promising more than 600 horsepower from its hybrid powertrain. The four-seater will also have all-wheel drive, torque vectoring and a 50/50 weight distribution. The brief teaser image shows a car that looks like a two-door Giulia, though it's unclear if we'll actually get a new coupe.

Electrification, autonomy and connectivity are coming, too. Obviously, the 8C and GTV will get electrified powertrains, but look for each Alfa Romeo model to have some sort of electrification available. Look for six plug-in hybrids with all-electric ranges of more than 30 miles. Level 2 and 3 autonomous systems are coming, too.