'It's got a Spanish motor and Italian shoes.' 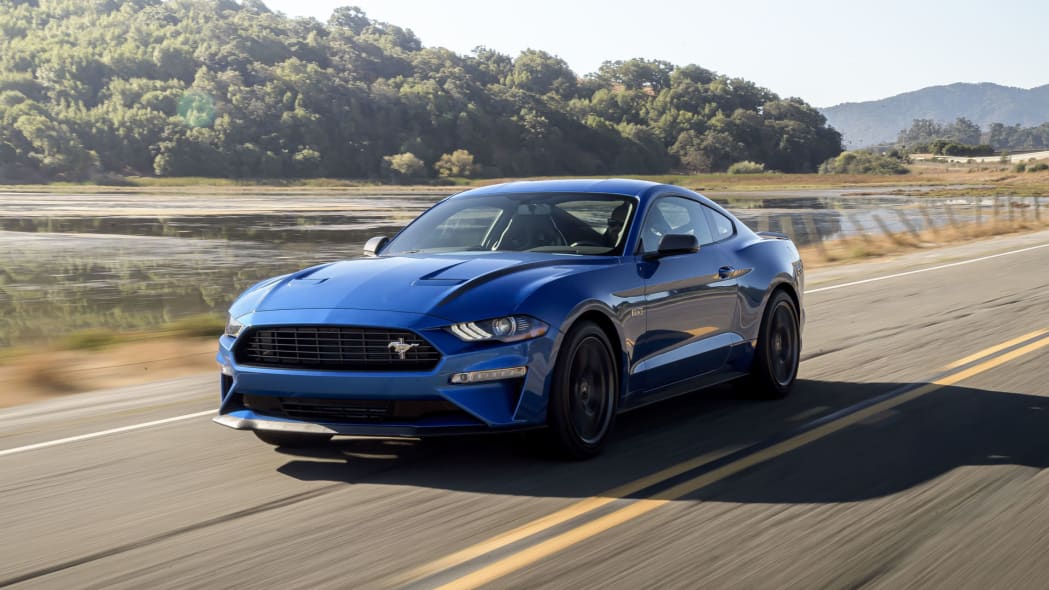 SAUSALITO, Calif. — For some muscle-car fans, a four-cylinder Mustang will always be like ordering the green salad at a steakhouse. But the 2020 Ford Mustang EcoBoost High Performance Package is really more like the Impossible Burger that’s winning converts across the land: With 330 horsepower on your plate, there’s enough umami richness to fool red-meat types at the local stoplight. At the same time, the healthful EcoBoost engine trims critical fat from the V8 version, and saves real money on fuel, insurance and monthly payments.

Those savings might seem beside the point if this Mustang didn’t back up the performance claims of its long-winded HPP name. But on a media drive overlooking the Golden Gate Bridge, the EcoBoost combined its own stirring views with enough Mustang GT-based handling, braking and features to justify a $4,995 upcharge over an entry-level ‘Stang.

Actually — and trust me on this one — you’ll want to spend another $1,995 for the HPP’s secret weapon: The optional Handling Package that takes the HPP to a whole other level of performance, creating one of the purest-handling Mustangs I’ve ever driven. It’s a home run, a genuine American sports car. It’s a testament to what talented engineers can do with a holistic approach to retuning an existing chassis. Like the Corvette Grand Sport, it may actually become the sweet spot of the Mustang lineup, but only for discerning types who understand the difference between brute force and bang-for-buck performance.

The EcoBoost High Performance Package with Handling Package — I suppose that’s “HPP-HP” — harkens not just to the overachieving Mustang SVO’s of the 1980s, but the better examples of Ford’s vaunted, Eurocentric RS models. Not coincidentally, Ford got its inspiration from a Dearborn skunkworks project that saw engineers drop the four-banger from a Focus RS test mule into a Mustang chassis. Just 15 months later, the HPP heads to showrooms. Its turbo-juiced Focus RS engine comes straight from Spain and bolts aboard the Mustang HPP in Flat Rock, Mich. Compared with the standard, Cleveland-built EcoBoost 2.3, the Spanish version gets a stronger, die-cast alloy block and high-performance cylinder head. Its 330 horsepower neatly splits the difference between the 310-hp Mustang EcoBoost and 350-hp Focus RS. All three cars generate 350 pound-feet of peak torque, a lofty figure for such a petite motor. 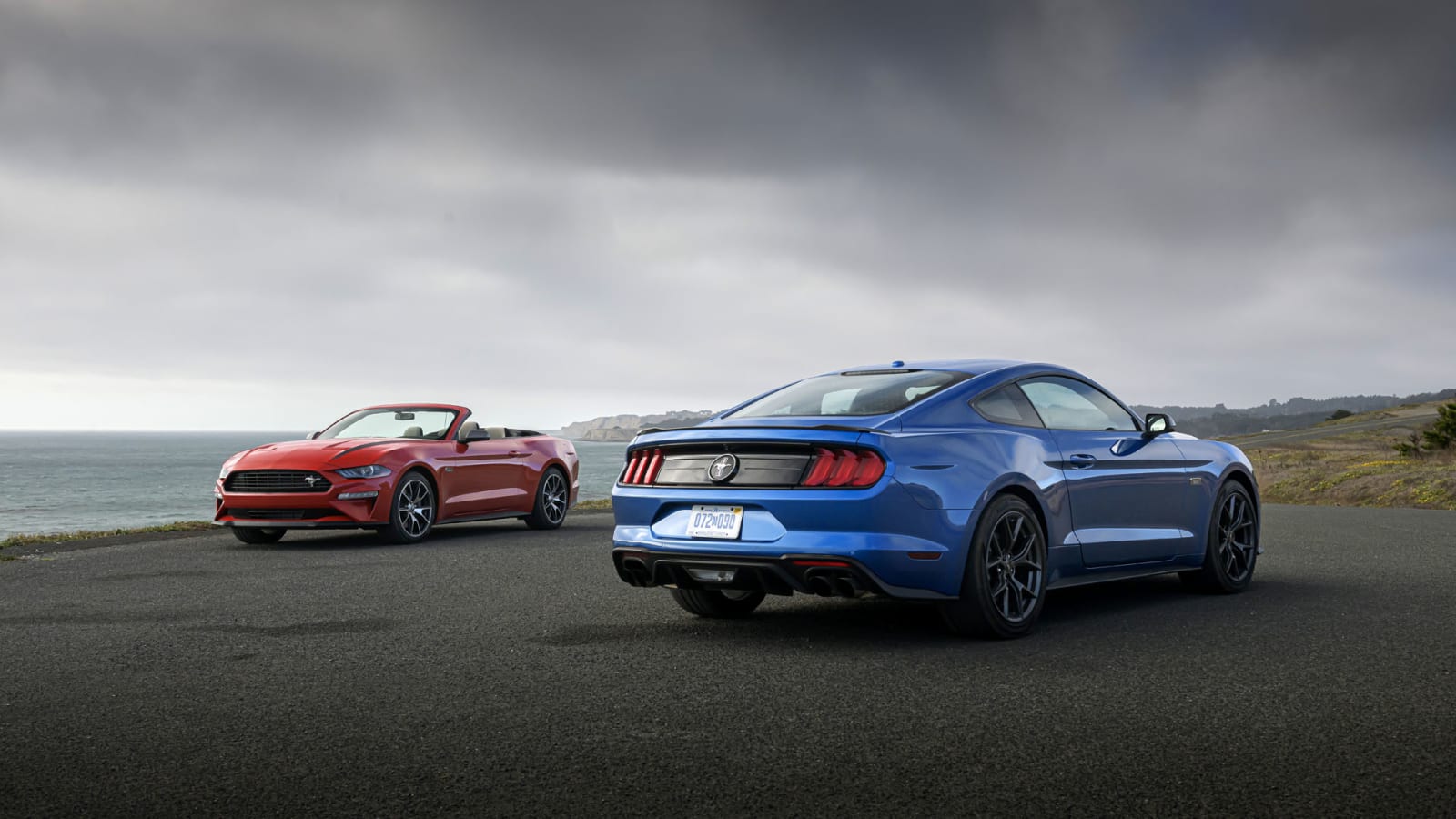 Yet don’t be fooled by the 20-hp deficit versus the dearly departed RS. For that fun-yet-peaky beast, a higher max horsepower was only available near its 6,500-rpm redline, where its torque was already falling off a cliff. So Ford added a new twin-scroll turbo with a 5% larger compressor, running up to 22 psi of boost. Combined with a smartly geared 10-speed automatic (a $1,595 option) or optional six-speed manual, the Mustang HPP showed off a wider, more linear powerband in both horsepower and torque.

The Ford’s stick shift, with its pleasantly mechanical feel, remains the choice for us stubborn holdouts. But the paddle-shifted automatic is significantly faster, especially in its selectable Drag Racing mode that overcomes transmission inertia for faster upshifts. Combine that Drag mode with automated launch control, and Ford claims a rocketing 4.5-second trip to 60 mph, versus about 4.9 seconds for the manual. In other words, a four-cylinder HPP with automatic is roughly as quick to 60 mph as a 460-hp Mustang GT with its own stick shift, and only a half-second behind the GT automatic. Top speed is limited to the same 155 mph as the GT. However you slice it, this is one fast four-cylinder.

From our outpost at the former Fort Baker, with views of the Golden Gate and San Francisco skyline, we noted another attribute of this handsome, small-displacement ‘Stang: No one need know that you didn’t shell out V8 bucks. Strip the “2.3-liter High Performance” badges from the Ford’s fuselage, and this HPP would fool an eagle-eyed V8 fan. A gloss-black grille, devil-horned chin splitter and painted lower fascia front an underbody belly pan. Sophisticated hood stripes fade to shadow as they traverse the hood. Nineteen-inch, machine-faced alloy wheels look the tough-guy part. The decklid spoiler is straight from the GT. Inside, a serialized dash plaque and engine-spun aluminum instrument panel, along with optional, well-chosen Recaro seats, reinforce the sense that this isn’t the Mustang you settled for. 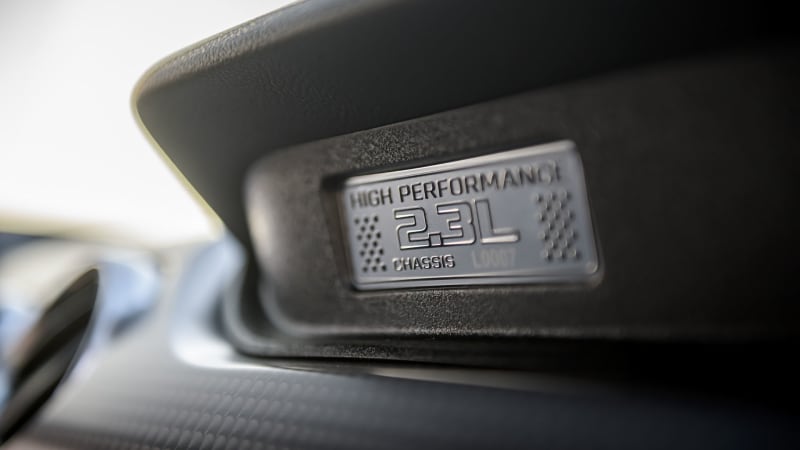 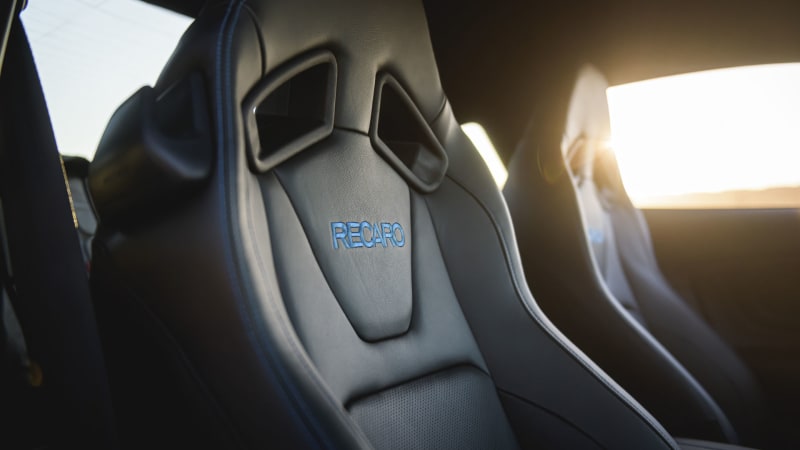 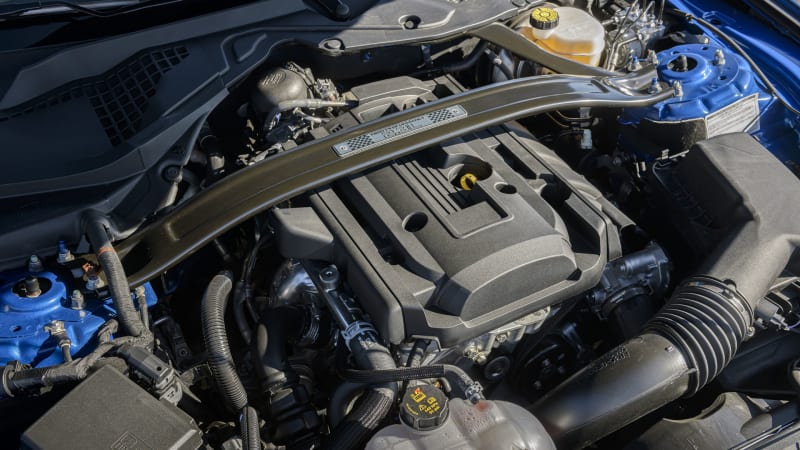 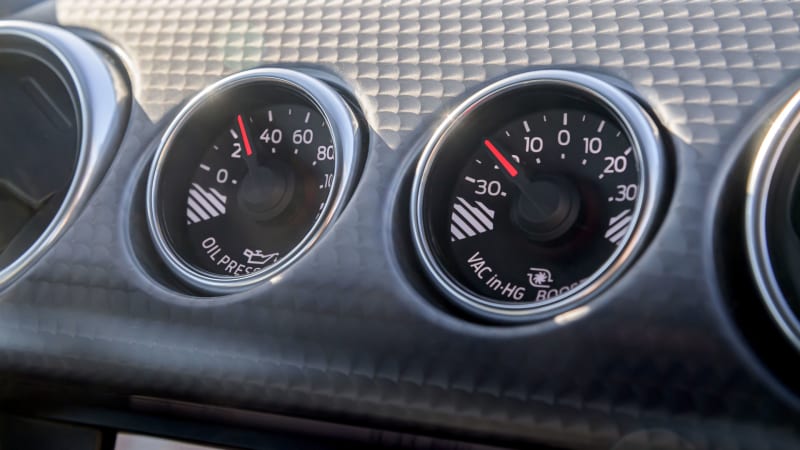 What you don’t get, of course, is the addictive rumble of the Mustang GT’s Coyote V8, including its assaultive climb to 7,500 rpm. And while the EcoBoost feels plenty fast above, say, 80 mph, the V8 versions, with more than double the displacement, feel even faster. Many muscle buyers, who’ve dreamed of a V8 from their time in the womb — maybe hearing papa’s Mustang rumbling outside — will literally close their ears to any four-cylinder discussion.

Ford has moved mountains, and probably recorded the output, to make the EcoBoost Mustang sound mightier than the average four-cylinder. There’s an active exhaust with four selectable modes. Convertible models get active noise cancellation just to mute unwanted frequencies, and that top-down convertible did deliver the most endearing combo of turbo whoosh and faux-V8 rumble. A chorus of fill-in tones are discreetly piped via radio frequencies. The resulting EcoBoost sounds chesty at times, hollow and droning at others, and quiet when that’s called for. Few will call the soundtrack a deal-killer.

And what you lose in Woodward Avenue sound, you gain in handling. Turns out that taking 200 pounds of engine weight off the Mustang’s overloaded front axle can transform the car. Overall curb weight falls to about 3,650 pounds. Front-to-rear weight balance slides closer to neutral at 53/47 percent, versus 56/44 percent for a Mustang GT. The HPP adopts GT brakes, including 13.9-inch front rotors, and adds an alloy strut-tower brace, with a 1.3-inch solid front roll bar and hollow 0.9-inch rear bar. The EcoBoost gets a mechanical rear diff, five selectable drive modes, and special calibrations for power steering, ABS and stability control.

Now, add that $1,995 Handling Package, and the real magic happens. (The package is exclusive to the coupe, but available with either transmission). A broad-ranging MagneRide adjustable suspension mates with a Torsen limited-slip differential, a shorter 3.55:1 rear axle and 0.9-inch solid rear sway bar. The pavement-sticking package then adds wider, Pirelli P Zero Corsa summer tires, in 265/40R size. That bears emphasis: Supercar-worthy tires, on a four-cylinder Mustang! Ford claims the HPP-HP will generate more than 1 g of lateral acceleration, which would outdo even the Chevy Camaro’s excellent, track-storming 1LE editions. 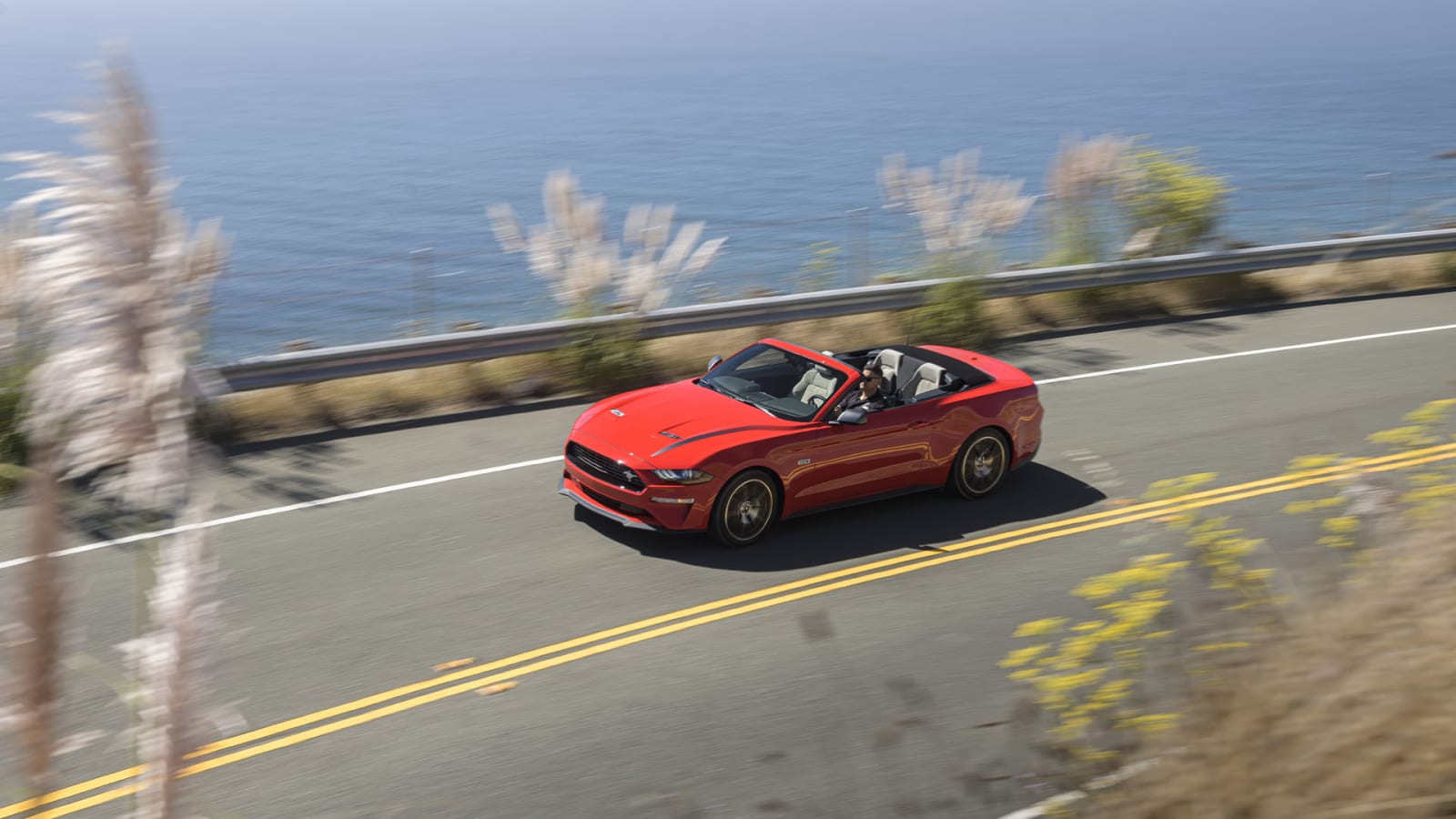 That on-paper promise translated into thrilling action on the buttery, video-game roads of Marin County and Point Reyes. This Mustang feels more like 500 pounds slimmer, with light, playful steering that weights up beautifully as g-forces increase.  Front-end grip seems nearly limitless, daring you to push harder and harder in an attempt to break those sticky Corsas loose. Turn-in is superlative, with no trace of nervousness. Through gut-check cliffside switchbacks, the residual float, numbness and understeer of most V8 Mustangs become a distant memory.

In the dual interest of science and screwing around, I dialed up the Line Lock feature that’s now standard on 2020 Mustangs. That automatically applies front brakes with no pedal required, ostensibly to warm up the rear tires for drag runs. But we know what it’s really for. Can this four-pot Mustang brew up a smoky burnout like its V8 kin? You betcha.

Depending on where your performance head is at, the EcoBoost HPP may seem like a sweet deal, or a splurge. The 330-hp EcoBoost HPP starts at $32,670. Again, that’s $4,995 above the most affordable four-cylinder Mustang. No arguments there. The Handling Package — again, the one you absolutely want — adds $1,995, but it’s not offered on the lowest-priced Mustang trim level. So after adding $2,000 for Sync3 infotainment (an 8-inch center screen and other goodies), the most-affordable HPP coupe with Handling Package starts from $36,755. That price happens to be right atop a Mustang GT coupe with the honkin’ V8 — a stripper, zero-options GT, but still. I tested an options-stuffed EcoBoost Handling Package coupe, with a 10-speed automatic, that rang up $39,370.

Now, if you’re talking a four-cylinder Audi, BMW, Mercedes or Porsche, $39,000 sounds like a steal, let alone the HPP’s base fare of $32,670. But this is a Mustang, where four cylinders can conjure bad memories of Hertz lots and Mustang IIs. Still, let’s sum up: We’re talking a Mustang with brilliant steering, 1 g of lateral grip, sub-5-second 0-60 times, an available stick, Torsen diff, adaptive suspension, active exhaust and top-shelf Pirelli tires — all for less than $37,000 to start.

Carl Widmann, chief engineer for Mustang and Ford Performance, has an even harder time choosing between his four- and eight-cylinder babies. He suspects the EcoBoost HPP will appeal to people who prioritize technology and edge-of-seat handling, the things that made the RS models such forbidden fruit in America. For this most Eurostyle of ‘Stangs, the only thing missing is that official RS badge.

“It’s got a Spanish motor and Italian shoes,” Widmann says with a smile.