Bigger, more luxurious and comfortable – but a true GT?

ST. ANDRÉ LES ALPES, France — The roads snaking through these ragged mountain ranges are dubbed the Route Napoléon after the French ruler’s treacherous journey from the Côte d’Azur through the French Alps in 1815. The asphalt ribbon squiggles over, alongside, and literally through mountain ranges with a scrawl so rambunctious it would challenge a race-prepped Lotus Elise, let alone a high-horsepower grand tourer. This is why we’re here – to put the 2020 McLaren GT and its mission statement to the test on the least direct path from A to B.

The GT isn’t technically the first McLaren with grand touring intentions: the 570 GT launched in 2016 as a softer, quieter way to span long distances. But the new model is the brand’s first fully-formed expression of whip-through-the-corners-but-drive-all-day-in-comfort versatility.

McLaren trod carefully when tweaking its winning supercar formula for long-distance friendliness, while maintaining the sharpness we’d need to tackle the notorious Route Napoléon. After all, McLaren’s new GT would damage the brand’s street cred if it was too soft, and miss the mark if it allowed occupant fatigue to enter into the equation. 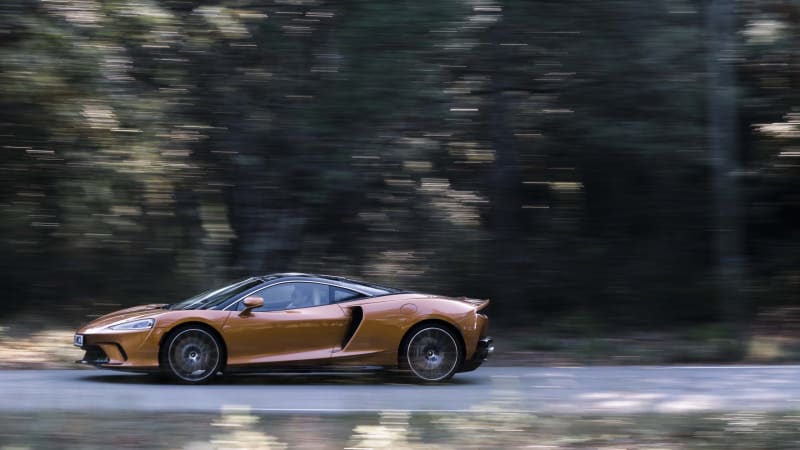 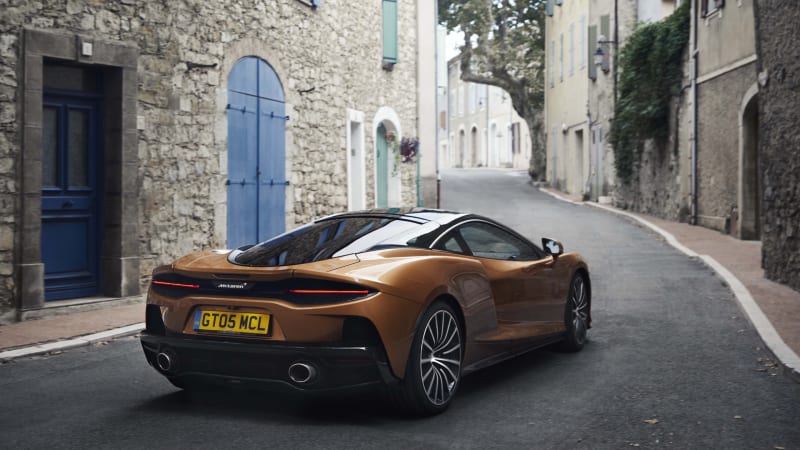 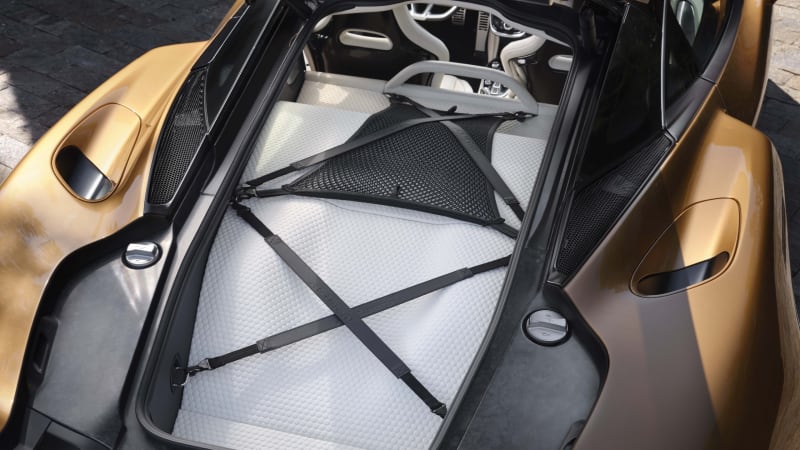 McLaren says it modified about two-thirds of existing hardware to strike the ideal balance, and the exterior appears to be an accurate sculptural representation of those changes. The body panels look subtler in person, countering those who suggest similarities to the Corvette C8. The GT is a bit more flared and angular, and utilizes some flat expanses of sheetmetal to hide its larger footprint. The body actually measures 6 inches longer than the 570GT, with notable overhangs front and rear. Nevertheless, there's a very usable 10-degree approach angle, or 13 degrees with the optional vehicle lift feature, which are numbers on par with the Mercedes-Benz C-Class.

The GT’s dihedral doors slide up easily after pressing a small, spring-loaded section of the side panel. Inside is typical McLaren — not too preciously ornamented nor overtly austere like some Teutonic carmakers. The steering wheel and paddle shifters in my tester are finished in a nicely polished aluminum finish that echo the milled materials used in the various switchgear and controls. Buttons are kept to a minimum on the center console and there are none on the steering wheel, while McLaren’s twin dials for controlling drivetrain and handling settings remain.

The carbon fiber MonoCell II-T chassis has been modified to accommodate a 14.8-cubic-foot luggage area, which, combined with a 5.3-cubic-foot frunk, results in a total cargo volume that McLaren brass happily report is greater than a Toyota Camry's (15.1 cu. ft.). However, volume does not equal usability. The shape of the rear cargo area is an oddly long, shallow space. Sure, it can stow a full-size golf bag, but don’t expect to shut the double-glazed, soft-close, (optionally) power-operated glass hatch with a standard full-sized piece of luggage below. Rest assured, McLaren’s $15,400 custom-fitted luggage option remedies this issue by tidily stowing your stuff into specifically proportioned containers. My tester’s cargo area was upholstered in a supple, pale leather that made me think twice before plopping my well-traveled backpack into. However, the GT’s trunk can also be lined with an optional SuperFabric material – a waterproof, stain-resistant, and scratch-proof textile. 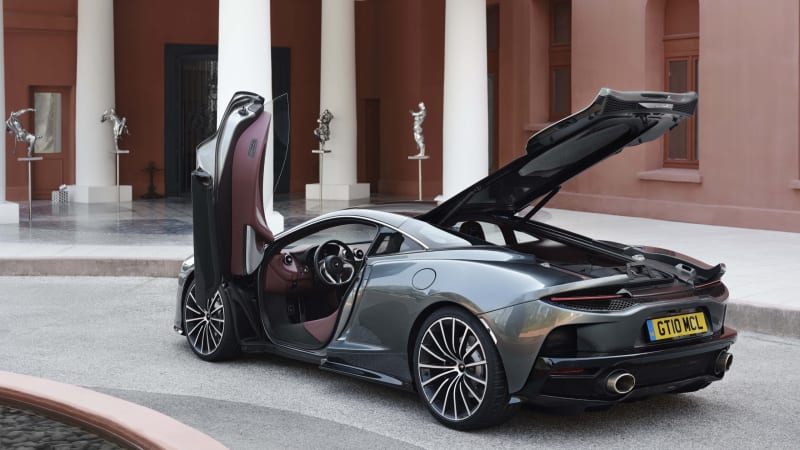 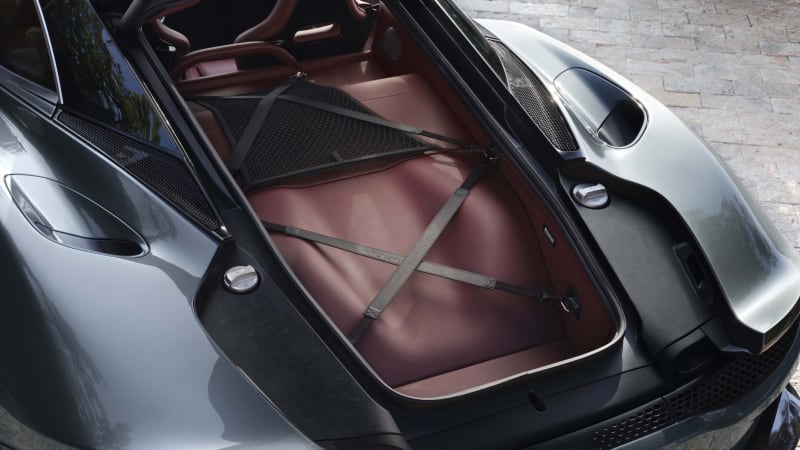 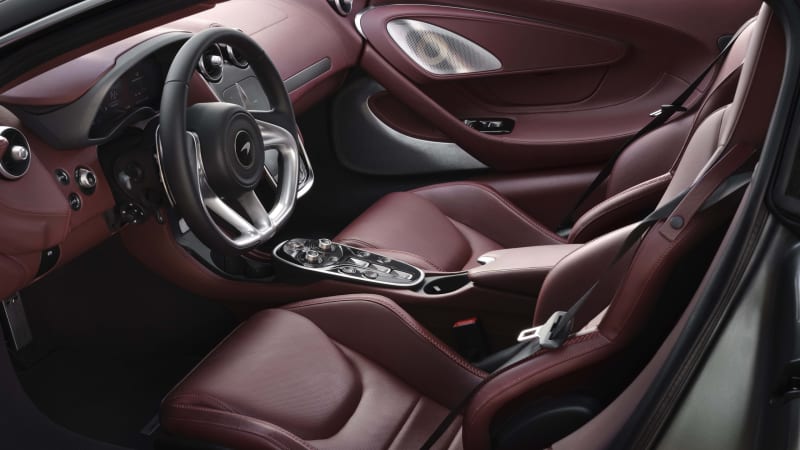 Remember, too, that there’s a ferocious twin-turbocharged, 612-horsepower, 4.0-liter V8 about 3.5 inches below that cargo area (which is inaccessible to its owner by the way). McLaren undertook a gargantuan engineering effort to keep things cool. The rear glass is UV treated to keep solar rays out, while the deck material sandwiches insulating material and a metal heat shield, aided by the manipulation of external airflow past the compartment. The R&D numbers support the theory: if the engine hits a sweltering 986 degrees while the exterior temperature reaches 95 degrees, the cargo bay temperature shouldn’t exceed 104 degrees — warm, but not outrageously so.

There's more to that V8 than just its effect on your luggage. The M840TE engine whirs to life with a present, but not obnoxiously loud exhaust note. Modulated by active exhaust valves, the engine’s volume level has three settings. Press the brake and click the paddle shifter into first (which is hinged right-to-left, thereby preventing the possibility of tapping both at the same time to select neutral), and the GT is ready to go. Unlike other McLarens, which tend to produce a fairly peaky power delivery, the GT’s 4.0-liter mill was tuned to deliver linearity and torque, which becomes perceptible as the revs ramp up. With 95 percent of the engine’s 465 pound-feet of torque available between 3,000 and 7,250 rpm, the GT provides thick sensations of thrust when you bury the pedal.

A claimed 0 to 60 mph time of 3.1 seconds impresses as the revs climb toward redline. Though power runs through the same dual-clutch seven-speed transmission as McLaren’s Sport Series cars using the same final drive ratio, the gearbox shifts a bit more smoothly in this application, more closely resembling a fluidly actuated torque converter than a back-slapping speed shifter. It can sometimes feel like the turbos need a moment to spool up when you drop the accelerator at low rpm in a tall gear, but once it builds boost, the GT surges ahead with breathtaking eagerness. The GT’s docility means its rapid accumulation of speed can be disarming. Top speed is 203 mph, and there’s no doubt that the GT can devour great lengths of tarmac in scant amounts of time. 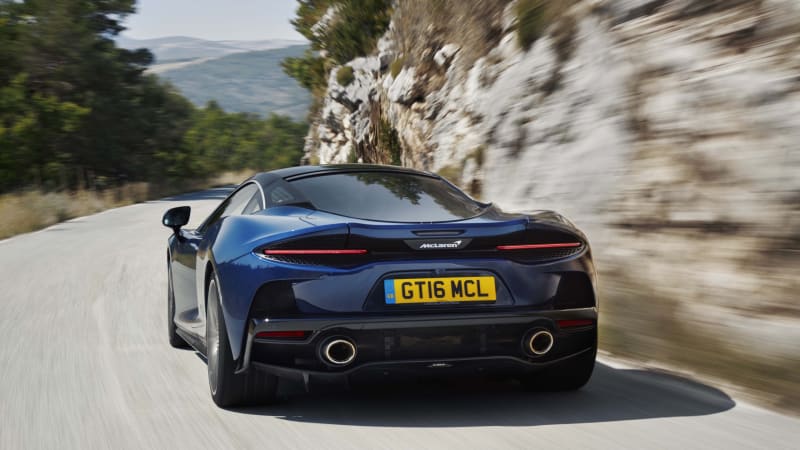 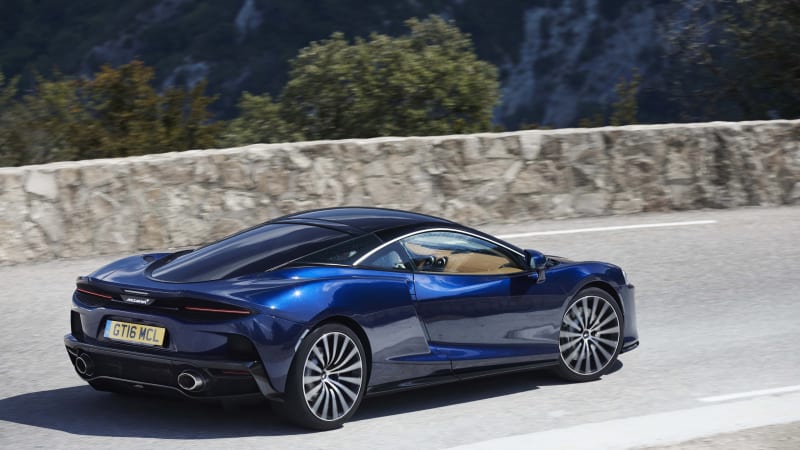 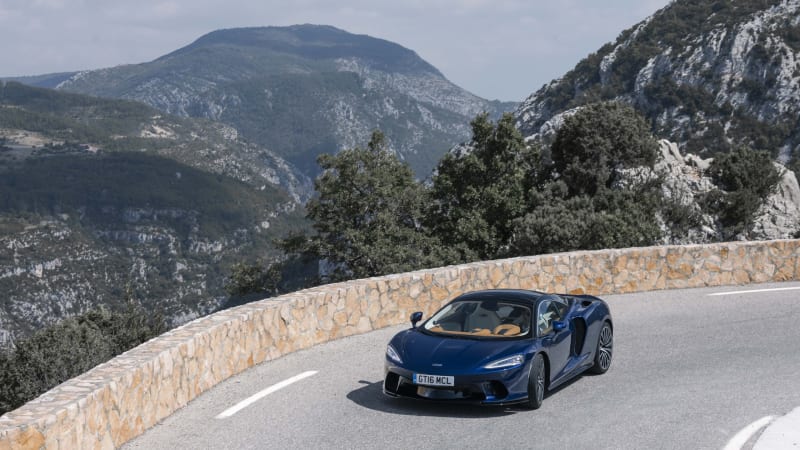 Also, although it’s larger than the 3.8-liter mill in the 570 S and 600 LT, the GT's V8 is actually more efficient at an EPA-estimated 18 mpg combined, allowing it to avoid the gas guzzler tax.

While it shares a hydraulic steering system with the Sport Series McLarens, the GT’s greater wheelbase requires a bit more wheel rotation to effect the same amount of wheel angle. And it’s tuned for refinement, which dulls some of the road feedback that has lent every other McLaren a feeling of sensory clarity.

“The [steering tuning] acts as a filter,” engineering director Jurgen Gagstatter said. “We want to avoid it feeling nervous.” OK, fair enough. This is a grand touring car first and a pure sports car second, so it’s been tuned with a bit more isolation from the constant stream of road data. It felt confident enough on the Route Napoléon’s twisting corners, but it's hard not to feel that McLaren’s characteristically feisty and lively steering is perhaps too muted in this application. At speed, the thought recedes, but when revisiting the car’s low-speed handling, there’s something about the steering effort that feels less light and indelibly accurate compared to sportier McLarens.

Where the brakes were expected to feel more user friendly than in other McLarens, the GT’s cast-iron brakes – 14.5-inch discs up front and 14-inch rears, both gripped by four-piston calipers – require a long pedal travel and a bit of effort before initial bite. (Carbon ceramics are optional, but not equipped on any of the testers.) It takes some getting used to during low-speed driving, but the system is easier to modulate when you’re braking late and diving deep into apexes at speed than it is while negotiating bumper-to-bumper traffic. 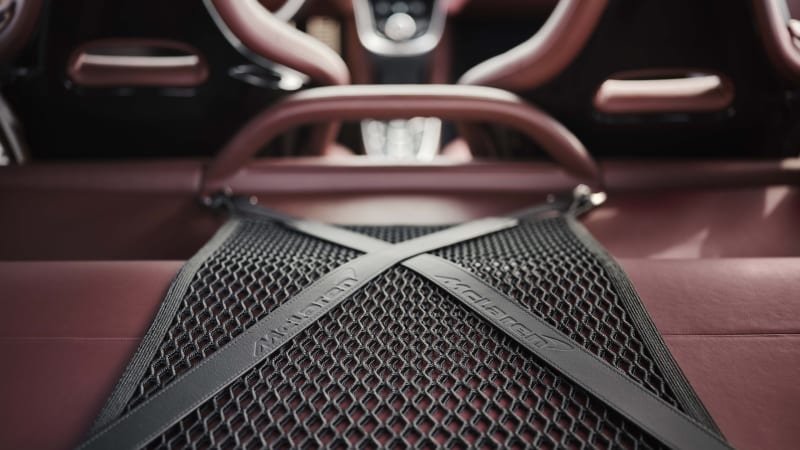 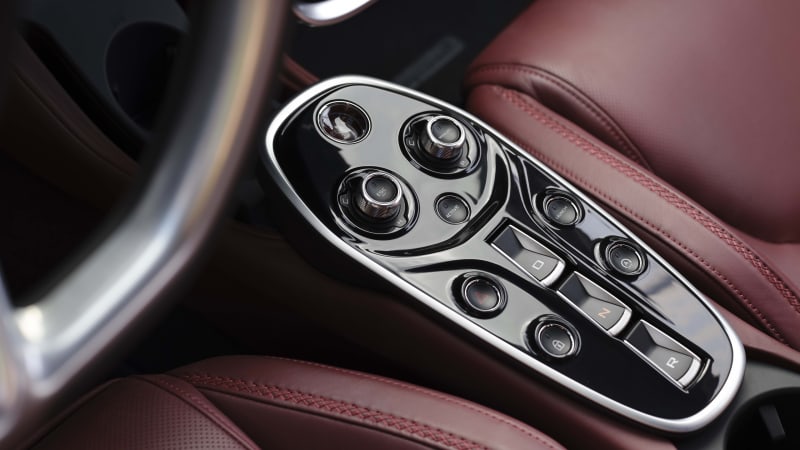 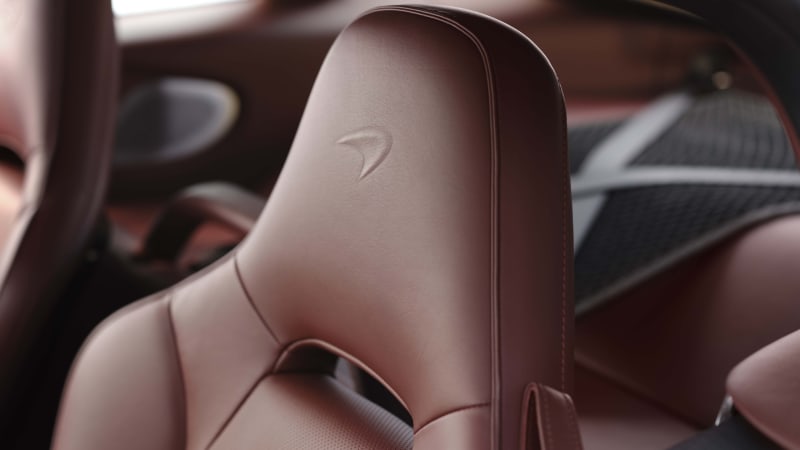 Driven hard for extended periods of time, the GT delivers on its mission to bundle potent performance with exceptional creature comforts. Its sonic profile is suitably mild, and can be punched up with slightly more exhaust note if the driver chooses. The automatically adjustable damping levels rarely feel too stiff, and the three-setting handling mode enables enough additional damping adjustability to dial in just the right ratio of control and comfort.

While the $213,195 McLaren GT does expand the brand’s repertoire, the industry’s top grand touring models present some formidable competition. Though less spritely and considerably heavier, the $198,500 Bentley Continental GT V8 is arguably the benchmark in the grand touring class, offering a lavish interior and outstanding ease while traveling at a breakneck pace. The $201,495 Aston Martin DB11 offers a bit of intriguing British counter-programming to the established super coupe status quo, while the $190,700 Porsche 911 Turbo S brings a remarkably capable — if somewhat anodyne — Teutonic flavor.

Based on curb weight alone, the McLaren GT’s lightest-in-class 3,373-lbs mass lends it a degree of tossability and responsiveness that makes it a favorite on delightfully gnarly mountain passes. If there’s one thing that detracts from its overall brilliance relative to other McLarens, it would have to be the toned-down steering. For the brand's repeat buyers, dialing in just a bit more of its telepathic broadcast would transform the GT’s driving experience from quite outstanding to stupendous.

Regardless, the McLaren GT is still driver focused to a tee, landing closer in tone to the 720 S than the edgy 600 LT. If your roads are straighter and you’re interested in a less ascetic expression of high-speed transport, you might find solace in other offerings. But along the most demanding of driver’s roads, the McLaren GT shines brightly.