The first step toward a new company.

England's history is filled with war. The last 70-plus years of peace and prosperity are an anomaly. Aston Martin, the nation's only independent carmaker, has similarly weathered strife – often of the financial variety – for most of its existence. Now Aston seeks stability. Its plan calls for new vehicles, a crossover even, and some electric propulsion for good measure. This is still a few years away. To get there, Aston will rely on its specialty, the sports car. Enter the 2017 Aston Martin DB11.

While the company transitions, the latest in the DB line is already transformed. It's the successor to the 13-year-old DB9 (the DB10 was James Bond's car in Spectre) and has a new V12 with twin turbos cranking out 600 horsepower. The car is based on a new aluminum architecture that's lighter and stiffer than the DB9's, so the DB11 handles better. Naturally, the design is striking. That's not a cliché.

Is all of this enough to sway some Ferrari, Porsche, and Bentley loyalists to Aston's fold? We've come to the gorgeous Italian region of Tuscany to find out. Taking the wheel on a sun-drenched morning, we head for Monte San Savino where a rustic lunch awaits. The V12 immediately grabs our attention. The note is buzzy at first, grows agitated, and then the sound morphs into a growling shout. Naturally aspirated engines are more visceral, but the DB11's turbo 12 is nothing to scoff at. The car sounds best in Sport Plus mode, which gives the engine and eight-speed transmission their most aggressive character. We lay on the throttle and the DB11 shoots forward, its long hood pointing the way through the countryside. The names of the villages roll off the tongue as the signs blur. Montisi. Montalcino. Trequanda. Florence and Pisa lay tantalizingly just outside of our route. Romantic as they sound, it's easy to resist Italy's magic. Its drivers are frickin' crazy.

Thankfully, the DB11 has quick reflexes. The steering is moderately weighted, and the suspension stays flat and controlled even when we urge the car aggressively through tight curves. The sticky 20-inch S007 Bridgestone tires stay planted and keep us confident. Things only get unruly during hearty acceleration that causes the tail to come out. It happens rather easily. Most of the time the ride is a comfortable experience, as we expect from a grand tourer.

With the sedate GT mode locked in, we examine the cabin. Our DB11 has subdued black leather accented by gold stitching. There are "chopped" carbon-fiber accents on the door panels. The texture is smooth, but the look is almost marbleized. Trust us, you'll want them. Reach up and touch the headliner. This model is equipped with the optional brogue detailing, which is perforated leather. It reminds us of a pair of wingtip dress shoes. The DB11 is swanky and sporty and certainly looks like something with a $214,820 base price.

The instrument panel has a digital speedometer in the middle. We remain on high alert for speed cameras, so this is an asset. The dashboard is anchored by an infotainment system sourced from Aston partner (and minority shareholder) Daimler. The electronics are like any Mercedes: pretty good, though the navigation takes us on a detour through a small town before randomly demanding a U-turn. Unfazed, we make use of the camera system's bird's-eye overhead view to steer out of the tight quarters.

The seats are comfortable, but not set up for aggressive driving. At times we wish for more bolstering. With reasonably sized A-pillars as a frame, we have a proper perspective of our surroundings. That's critical. Bicyclists, Piaggios, and pedestrians come at us from all sides. Unfortunately, the cabin is the setting where we notice this pre-production DB11's foibles. We try to put the windows up, but the glass hits the top and bounces back down. Another driver accidentally folded the mirrors and couldn't get them to reopen. After a day of driving, the twin-turbo engine began to whine almost like it was supercharged on the way back to the villa. Talk about First World problems.

What's inside counts, but the DB11's looks are what matter. It's as glamorous as anything Aston has ever made. The new model is two inches longer, has a 2.6-inch-longer wheelbase, and is an inch wider than the DB9. The modern appearance is set off by a low roof that dips gracefully into the flared rear fenders. This car has big hips, and they look good. With a long hood, strong lines, and a clean fastback silhouette, the DB11 plays the part of the quintessential British sports car. Cafe-goers look up from their cigarettes and take note. The shape is accented by LED lights front and rear and an updated riff on Aston's iconic grille. The roof strakes arc across the top and can be selected to match the body color or stand in contrast to it with black or silver finishes. The badges are larger than the DB9's and come from a jeweler that crafts military crosses for the British forces. We selected a cinnabar orange DB11 for our drive. If a volcano erupted Starbursts, the lava would be this color. 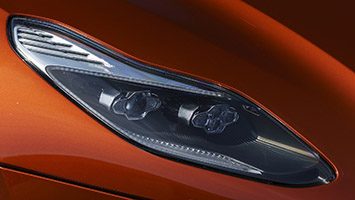 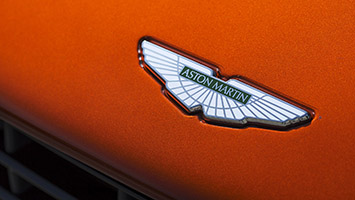 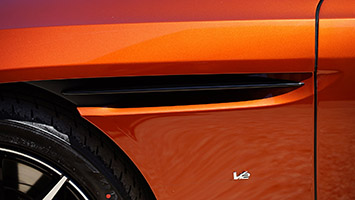 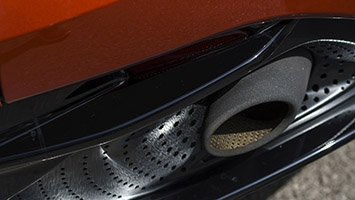 The eye-catching design is also functional. Those side strakes in the front fenders? They're actually aerodynamic treatments that reduce lift by pulling high pressure air away from the front wheel arches. Aston calls them "curlicues" because that's the shape the air takes as it's funneled out. The company first used the curlicue on the Vulcan. Because it's a track demon with 820 hp, no one noticed.

On the car's rear, the designers created an element they call AeroBlade, which pulls air through side vents in the C-pillars and directs it through tunnels in the body before exiting out the deck lid. At high speeds, a small Gurney flap lifts up, acting like a spoiler. The wing retracts back into the deck lid when it's not needed. The aerodynamic treatments are extensive, but Aston went to Bond levels of secrecy to conceal them. "This is our genteel product," Aston chief creative officer Marek Reichman says. "It's about being subtle."

All of this rides on a new platform that replaces Aston's ancient and prolific VH underpinnings. The bonded aluminum body structure is about 86 pounds lighter than the DB9's yet it's 15 percent stiffer, and the hood, roof, and doors are made of pressed aluminum. The advancements continue under the clamshell hood, where the 5.2-liter twin-turbo easily outguns the DB9's naturally aspirated 6.0-liter V12.

Purists, hold your fire. Even Ferrari is embracing forced induction, and this is a move Aston had to make in the name of performance and efficiency. Developed in-house, the new engine pumps out 600 hp and 516 pound-feet of torque, pushing the DB11 to 62 miles per hour in 3.9 seconds en route to a top speed of 200 mph. For comparison, the DB9 only mustered 540 hp and 457 lb-ft, which urged it to 62 in 4.5 seconds before topping out at 183 mph. On the greener side, the DB11 has cylinder deactivation. Every 20 to 30 seconds, one of the banks kicks off and the other one comes on, saving fuel and keeping the engine ready to, well, fire on all cylinders. The engine also has stop/start technology and a quiet start mode – simply push the ignition button a heartbeat longer, and the V12 fires up noticeably softer. 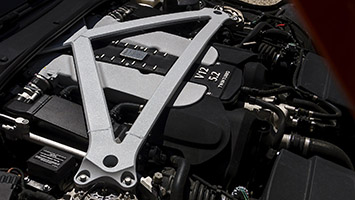 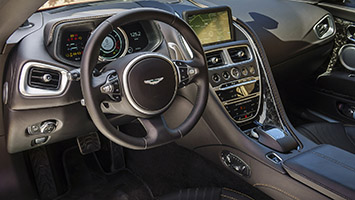 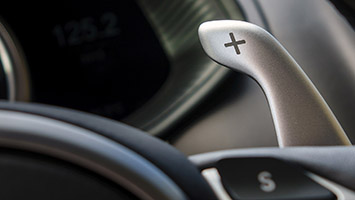 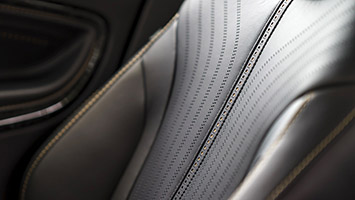 Aston replaced the DB9's six-speed automatic with a ZF-sourced eight-speed gearbox. The new unit shifts smoothly and has paddles for when you want more engagement. Additionally, the rear-mounted transaxle has a limited-slip differential with active torque vectoring to enhance the car's handling ability.

Aston didn't roll out a warmed over DB9. The DB11 is faster and more sophisticated than any DB in history. It has to be. Well-heeled buyers will cross-shop this with the Ferrari California, Porsche 911 Turbo S, and Bentley Continental GT. There must be a reason to buy the Aston beyond the fact that it turns heads at the country club.

No, it needs to be different and better. Not in every way, but in compelling ways. The typical DB11 buyer didn't see Spectre in the theater. He knows Daniel Craig and they've shared martinis. And during that first cold sip tinged with lemon peel, he's not concerned with the DB11's precise 0-60 time. Who cares? The DB11 is fast. It stands out, and so it delivers on the promise of Aston's potential for a successful second century.