Ship crew awaited rescue in hellish darkness: 'They were being cooked'

They clung to pipes over deep water in 150-degree heat 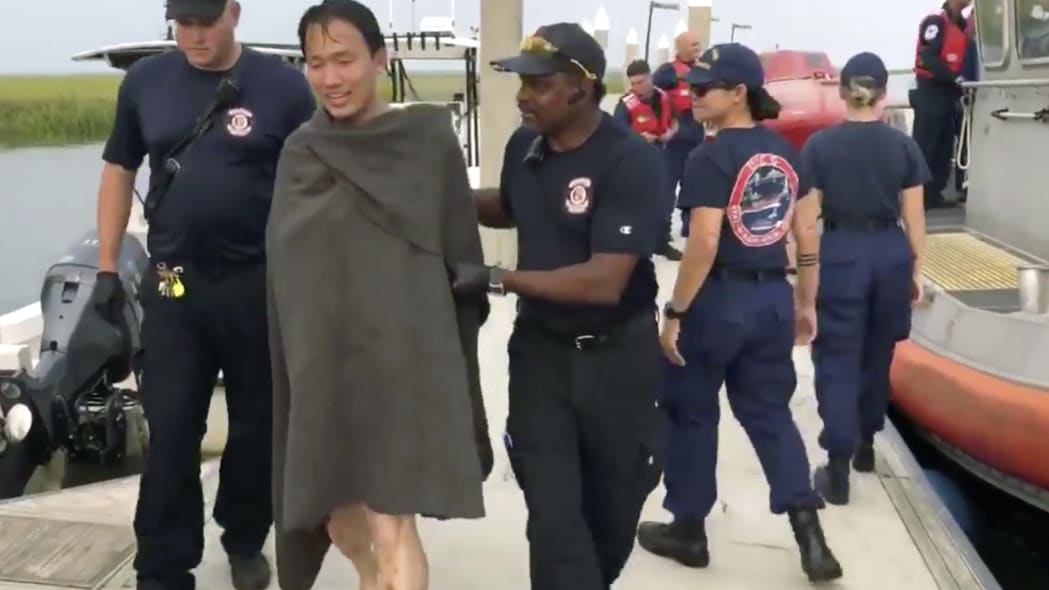 SAVANNAH, Ga. — Four crew members trapped in the belly of an overturned cargo ship waited for nearly 36 hours in pitch darkness and oven-like heat, perched on pipes and railings above deep water before they were pulled to safety, coordinators of the rescues said Tuesday.

The South Korean sailors emerged Monday from a hole drilled through the steel-plated hull of the Golden Ray, which flipped onto its side along the Georgia coast. Three of them were found in the engine room after making tapping sounds all night to show they were alive, and to help rescuers figure out where they were inside the massive vessel. The fourth had to be rescued from a partially submerged control room, trapped behind blast-proof glass that had to be cut with a diamond-tipped tool.

"These guys were in the worst possible conditions you could imagine a human being to be in," said Tim Ferris, president of the salvage company Defiant Marine, which the U.S. Coast Guard called in to help plan and conduct the rescues. "They survived a ship's fire, a ship capsizing, landing on the side 90 degrees in an engine room, not knowing what the conditions were in pitch black darkness."

Ferris told The Associated Press the crewmen had to find purchase in the dark along a maze of plumbing and equipment to stay above deep water flooding the 656-foot (200-meter) long ship, where everything around them had suddenly gone sideways.

They also endured crushing heat and humidity. As daytime temperatures outside rose into the 90s, he said, the ship's interior approached roughly 150 degrees (65.5 Celsius).

"The temperature in the engine room was hellish," Ferris said. "They were being cooked."

The Golden Ray had just left the Port of Brunswick when it overturned at about 2 a.m. Sunday with more than 4,000 cars and other vehicles in its cargo hold. The cause remains unknown.

The busy automobile port about 70 miles (112 kilometers) south of Savannah remained closed Tuesday as the Coast Guard shifted attention to how best to remove the giant vessel and contain any environmental damage.

Oil sheen spotted in the water of St. Simons Sound where the ship overturned was being soaked up by absorbent boom that acts like a string of large cotton balls, said Petty Officer Luke Clayton, a Coast Guard spokesman.

"There is a light sheen," Clayton said. "There's no sign that the actual fuel cells or fuel holds of the vessel are leaking."

He said the oil may have come from fuel cans that fell into the water from the ship's deck, or perhaps from the vehicles inside the cargo hold.

Only ships carrying perishable goods that can't be rerouted are being allowed into the port, Clayton said, while others are being diverted to nearby seaports such as Savannah and Charleston, South Carolina. He said he didn't know how long the Brunswick port will remain closed, but removing the Golden Ray "is something that will take weeks to do."

The trapped sailors "had the bare minimum in terms of supplies" before they were rescued, Clayton said. He didn't know their conditions Tuesday.

Sylvia Tervoort, a salvage expert who helped coordinate the rescues, told ABC's "Good Morning America" on Tuesday: "They are doing well at the moment. They were really exhausted when they came out."

The Coast Guard moved in quickly to rescue 20 of the men onboard after when the ship overturned on Sunday, using winches to pull the men one by one into a hovering helicopter. But fire and concerns about instability, slowed efforts to go after the remaining four.

To conduct those final rescues, the Coast Guard called in private salvage specialists with expertise in navigating shipwrecks in hazardous conditions.

Fearing a cutting torch might ignite fumes from fuel inside the ship, Ferris said, crews used drills to bore a hole just large enough to let some fresh air into the engine room and lower a radio, flashlights, food, water and electrolyte popsicles to the three men inside.

Rescuers then spent several hours drilling more than 40 holes side-by-side to cut away a section of the hull large enough to fit a ladder, Ferris said. Two of the men in the engine room had strength to climb out on their own, he said. The third was weak from fatigue and was brought up on a stretcher.

Getting the final sailor out was a much more difficult challenge. He was trapped in a control room about 180 feet (55 meters) from the entry hole, requiring a 40-foot (12-meter) climb. The control room's door was underwater, Ferris said, trapping the man behind "blast-proof glass designed to withstand an explosion."

Wearing respirators in the stifling heat, rescuers made several unsuccessful attempts to free the crewman.

"At one point they had to fill ziplock sandwich bags full of ice and put them in every pocket of the team that went in, to cool their body temperatures as they climbed and worked," Ferris said. "There are much better ways to do it if you have time to get your hands on the right supplies. But it did the trick."

The team finally used a handheld cutter with a diamond tip to make score marks in the glass and break it. Ferris said the sailor "came out with a spring in his step."

"It was miraculous," he said. "When they came out and had sunlight on their faces, it brought a tear to the eyes of a lot of tough guys. It was a rescue of a lifetime."