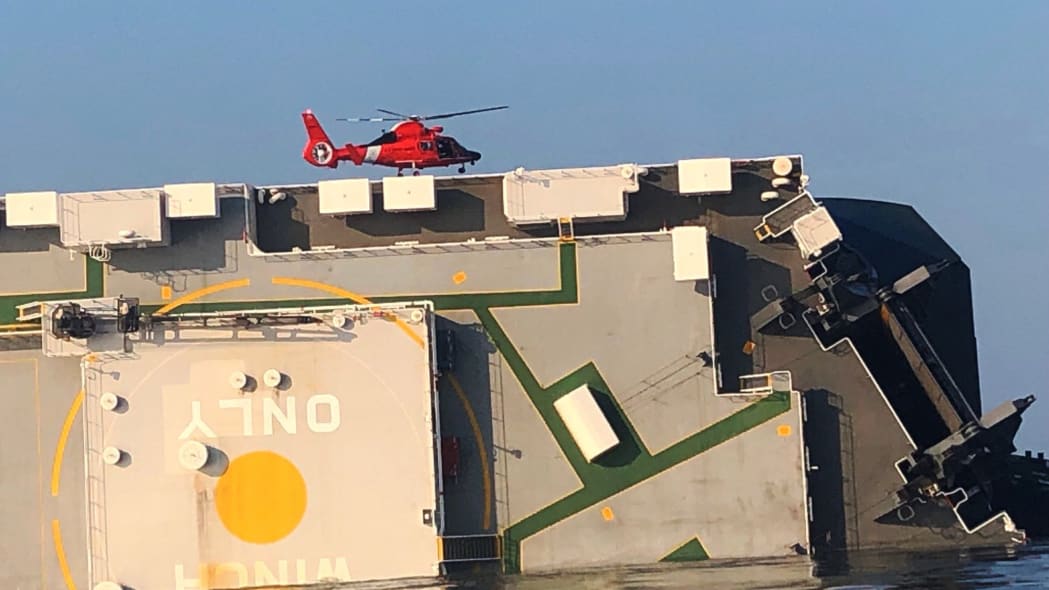 ST. SIMONS ISLAND, Ga. — Coast Guard rescuers found four South Korean crew members trapped inside a massive cargo ship, by rappelling down the side and drilling a hole through the hull to contact them on Monday.

"The early indication is they are on board and OK," Lt. Lloyd Heflin told The Associated Press.

Heflin said the rescue team is communicating with the trapped sailors through the hole they drilled, but getting them out remains quite challenging.

The capsizing of the Golden Ray in Georgia's St. Simons Sound early Sunday caused fires and smoke, and while the flames are now apparently out, the huge ship is listing at roughly 90 degrees, with more than 4,000 vehicles inside it.

#BreakingNews Salvage crews have have made contact with crew members in the #GoldenRay. Conditions unknown. Extraction being planned. #HappeningNow pic.twitter.com/wPdKfgqBdN

A South Korea foreign ministry statement said Monday that the crew members were alive and isolated inside an engine room. It said 10 South Koreans and 13 Filipinos had been on board, along with a U.S. harbor pilot, when the ship began tilting over.

The 656-foot (200-meter) vehicle carrier is now stuck in the shipping channel, closing the busy Port of Brunswick.

Coast Guard crews lifted 20 people into helicopters hovering overhead on Sunday before rescuers determined the smoke and flames and unstable cargo made it too risky to venture further inside. Rescuers were able to climb aboard on Monday after officials determined it was stable enough for a helicopter to land on the hull, Coast Guard Lt. Kit Pace said.

The Coast Guard said it was notified of the capsized vessel by a 911 call at about 2 a.m. Sunday. The cause remains under investigation. Hurricane Dorian was already well beyond the Georgia coast, where it blew past last week before being downgraded to a post-tropical cyclone.

The ship channel is currently closed to vessel traffic, with a safety of a half mile around the Golden Ray in St. Simons Sound. The Coast Guard said the overturned ship hasn't released any pollutants so far, but cleanup efforts are ready if needed.

The ship is owned by Hyundai Glovis, which carries cars for automakers Hyundai and Kia as well as others.

Brunswick is one of the busiest U.S. seaports for shipping automobiles. Nearly 614,000 vehicles and heavy machinery units moved across its docks in the 2019 fiscal year that ended June 30, according to the Georgia Ports Authority.

Featured GalleryCargo ship rescue off the coast of Georgia