Yet another C8 Chevy Corvette rumor maps out the coming engines

Let's take a look at how plausible any of this seems 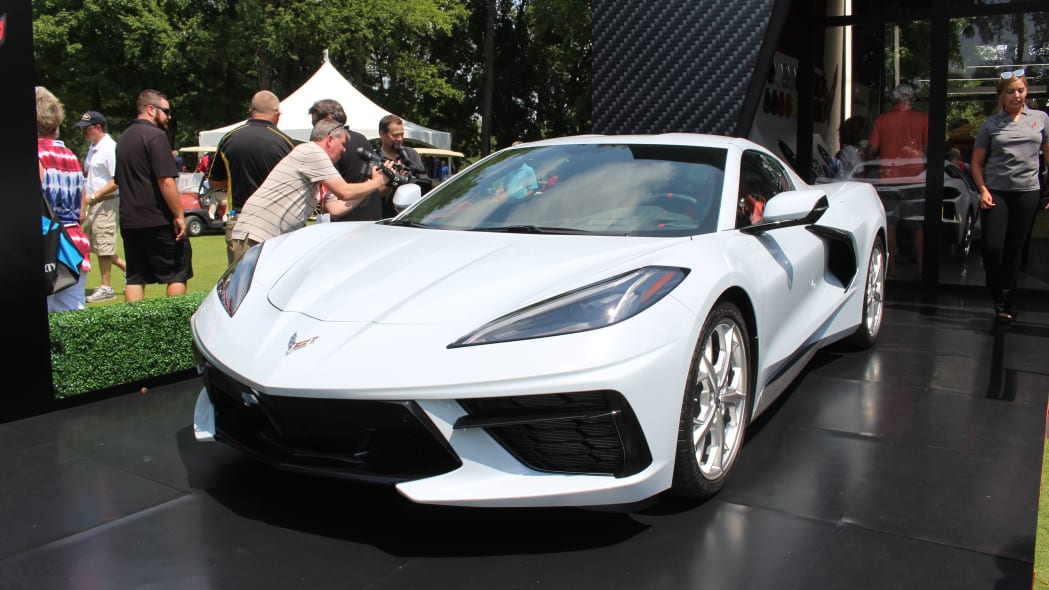 We're getting so deep into the rabbit hole of rumors about the C8 Chevrolet Corvette that it's possible we'll end up in a room decorated like John Nash's office or desperately seeking Pepe Silvia. And with this latest bit of rumor courtesy of, yet again, Corvette Forum, we've tiptoed so far away from hard intel that we're posting on numbers that came from a guy who knows a guy who knows a guy. Nevertheless, it's possible there's something to it, so here goes. Forum member StevenStarke got screenshots of an Excel spreadsheet with details on the three engines going into the C8 Corvette and their four outputs. At bottom is the 6.2-liter V8 we already know about. Above that is a naturally aspirated 5.5-liter V8 with 600 horsepower and 620 pound-feet of torque. Next up, a 5.5-liter twin-turbo V8 with 850 hp and 722 lb-ft. And at the peak, that 5.5-liter TT V8 with electric assistance, rocking 850 hp and 922 lb-ft.

Taking a high-level view, the numbers could have some connection to reality. We just posted on a rumor back-and-forth about the coming Z06 and ZR1 power plants. An initial report in Automobile said a twin-turbo V8 with around 800 hp would slot into the Z06, a follow-up report from Muscle Cars & Trucks rebutted that, saying the Z06 would get an atmospheric V8 and the TT V8 could go in the ZR1 and/or a model called the Zora. This Excel spreadsheet lists an atmospheric 5.5-liter, 32-valve V8 called the LT6, which we'd peg as the motor MCT was referring to. In our earlier post, when we wondered where Chevy would get an NA 5.5-liter V8, we forgot that it already had one running in the C7.R race car. We don't know yet what will power the C8.R, but it sounds like it could have a flat-plane crank. Add those two together, and the betting money lays short odds on the NA V8 putting its 600 hp behind the C8 Z06, long odds on that engine powering the C8 Grand Sport.

This scheme lines up with a remarkably prescient article in Car and Driver from way back in May 2018. The mag predicted "a naturally aspirated 5.5-liter DOHC V-8 with a flat-plane crankshaft capable of a Ferrari 458-like maximum engine speed of 9,000 rpm" that would be "good for at least 600 horsepower" and be the next to launch after the base LT2. After that, a 5.5-liter V8 that "will make about 800 owner-maiming horsepower." C/D said "this will be the fastest version around the Nürburgring Nordschleife." Finally, a couple of years later, "Chevy would add a 200-hp electric motor" up front and a brace of cooling addenda.

Here it's all plotted out, courtesy of a forum member ...

But the spreadsheet compels so many questions that no one would be blamed for dismissing it. Output figures for the LT2 V8 in the base C8 Corvette Stingray are listed as 469 hp and 515 lb-ft, when the actual numbers are 490 hp and 465 lb-ft without the Z51 package. Another poster at Corvette Forum said the spreadsheet likely represents preliminary numbers sketched out during development, a theory that could clearly apply to every figure here, if any are true.

More questions: The 5.5-liter V8's power figures are said to come at 5,000 rpm in atmospheric and twin-turbo guises — far down on that 9,000-hp mentioned in C/D. On top of that, if the 5.5-liter V8 produces 620 lb-ft, 5,000 rpm isn't enough to also produce 600 hp; at 5,000 rpm you'd only get 590 hp, the engine needs another 100 rpm to make 602 hp. Regarding the Z06 vs. Grand Sport, some think it would be unthinkable for Chevy to lower Z06 horsepower to 600, others would love an NA V8 Z06, still others say it's unlikely the Grand Sport breaks tradition and gets more horsepower than the base model since that hasn't been a possibility since the C4 Corvette.

We say, "Who knows?" We're just going to leave this information here, and return to our office with more thumbtacks, string, and silly putty to root out the conspiracy.