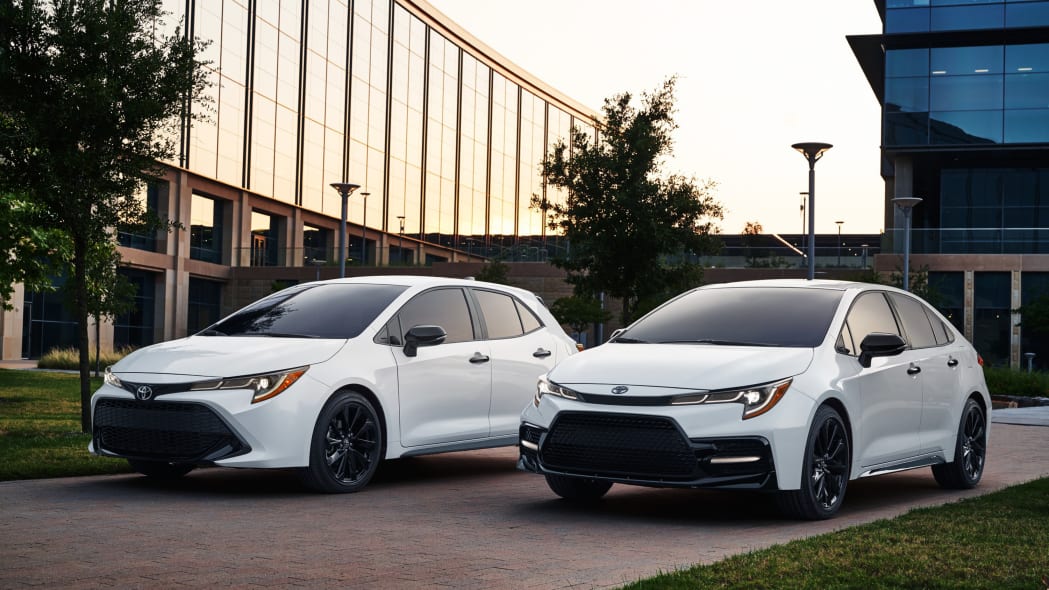 The terminator — the line that separates night from day on Earth — has been creeping over Toyota's lineup in the form of Nightshade editions. The 4Runner, Camry, Highlander and Sienna already have their darker alter egos, and now the Corolla sedan and hatchback enter the darkness for the 2020 model year. Both Corolla Nightshade versions are based on the SE grade with the CVT and get black-out badging, grilles, mirror caps, window trim, rocker panels, door handles, spoilers, shark-fin antennas, diffuser inserts, and 18-inch wheels. The hatchback adds a black inner headlight frame in front and a black lower spoiler in back.

Buyers are able to option the package on the sedan in Super White, Classic Silver Metallic, and Black Sand Pearl. On the hatchback, instead of Black Sand Pearl, the third color is Midnight Black Metallic. The Nightshade sedan lists for $22,750 before a $945 destination charge, for a total of $23,705 after destination, $700 more than the standard SE trim. The Nightshade hatch runs $23,245 after destination, which is $900 more than the hatchback SE.

The five-door Corolla tweaks its equipment mix for next year, too. If the Nightshade doesn't do enough to get a buyer's Batman on, Toyota has put a black roof on the options menu. It can be ordered with four body colors, one of which overlaps with the black-out package: Blizzard Pearl, Blue Flame, Classic Silver Metallic, Oxide Bronze and Smoked Paprika.

A new feature only for the SE hatchback expands cargo space by omitting the spare tire. A lower load floor frees up six more cubic feet of space behind the rear seats, taking cargo volume to just about 24 cubic feet. Compatible with the SE in either CVT or six-speed manual guise, a tire repair kit replaces the extra rubber. On the SE and XSE grades, the Sirius XM All Access trial goes from being a cost option to a standard feature, and the entire hatch lineup adds Android Auto compatibility as standard, joining the already available CarPlay.