FCA CEO says the Ram 1500 Classic will live on, might even get an update

The last-gen Ram pickup gets a new lease on life

Ram intends to keep selling the 1500 Classic pickup truck for an unknown amount of time. According to a report from Motor Trend, FCA CEO Mike Manley during the company’s second-quarter earnings call said there are no plans to discontinue the old truck. Not only this, but Manley also suggested that Ram could give the Classic an update.

In case you weren’t familiar with Ram’s strategy of selling the 1500 Classic alongside the regular 1500, we’ll lay it out for you: Ram released a completely new 1500 for the 2019 model year. Instead of discontinuing the truck it was selling before the new model, Ram continues to produce it under the 2019 Ram 1500 Classic name. Despite it being a 2019 model year truck, the Classic is the last-generation Ram. This is done so that Ram can offer customers a full-size truck option than is cheaper than the fancy new truck is capable of dipping down to.

The 2019 Ram 1500 Classic starts at $29,340, whereas the regular 1500 has a base price of $35,135. If that makes a difference for enough people, then it makes financial sense for the old truck to stick around. However, Ram appears to be considering giving the old truck some new tricks, according to Manley. If that idea comes to fruition, then the Classic will start to look like an even better value proposition than it is today. Ram would have to act quickly, though, as the old truck just accelerates its aging by the day as each new pickup hits the market.

Sales of the Classic were certainly an important contributor in the battle with Chevy to takeover the number two spot in the pickup wars. An even more attractive offering for the same low price sounds like a short-term winner to us. If Ram does refresh the 1500 Classic for 2020, don’t expect it to last much longer beyond that model year, though. It’s already on life support at this point, and the new 1500 feels years ahead of it in every way. 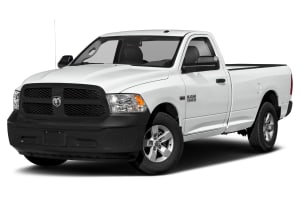