The hybrid crossover never caught on

The Nissan Rogue Hybrid is officially dead for the 2020 model year. Nissan sent out a press release early this morning with pricing for the 2020 Rogue, and we noticed the Hybrid model was curiously missing from the sheet. We dropped a line to Nissan to figure out what was going on. Here’s the official word from Nissan spokesperson Kevin Raftery: “Nissan will not offer the Rogue Hybrid for model year 2020. We will continue to focus efforts on the best-selling Rogue and new 2020 Rogue Sport.”

Nissan’s hybrid compact crossover was almost a unique idea when it came out for the 2017 model year. Toyota had the RAV4 Hybrid. A redesigned (much improved) version of that is out for 2019, and the new Escape is getting both a Hybrid and Plug-in Hybrid version. We called it “A can’t-lose idea” in our First Drive story then, but history has proven our seeing-eye glass wrong. Raftery wouldn’t say exact sales figures, but he did say that Rogue Hybrid was “a small part of the overall sales mix for Rogue.”

If you break it down by cost, the Rogue Hybrid was asking a lot without providing much in return. The base 2019 Rogue Hybrid is a whopping $2,800 more than a regular Rogue. You netted five mpg in the combined EPA rating, which the agency says would save you approximately $200 a year over a normal Rogue in fuel costs. Doing the math, you’d have to drive the car for 14 years before you break even on gas savings. That’s a long time driving a Nissan Rogue.

You’ll still be able to buy the 2019 Rogue Hybrid for some time, but those will be disappearing from lots sooner rather than later. A base Rogue Hybrid SV starts at $28,595, and a fully-loaded SL trim comes in at $33,885. All other non-hybrid models received small price bumps of around $200 in each trim level for 2020. 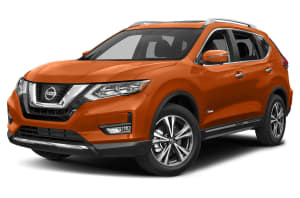