There’s a lot to love about the new 3 Series, but not everything

SHERMAN OAKS, Calif. – You might think someone checked the “Include Caveats” box on this 2019 BMW 330i’s configuration, because there are so many positive aspects to this new 3 Series, but virtually every one comes with an asterisk. Just take one glance at the exterior of my Portimao Blue Metallic tester – it’s the best-looking 3 in a couple generations, with gorgeous proportions, and the blue is stunning. But as critic after critic have pointed out, those taillights are near clones of the competing (but not nearly as handsome overall) Lexus IS. And in a sea of both vehicles in Los Angeles, the 330i missed out on a chance to stand out.

Which is a theme of sorts. Don’t get me wrong – the new 3 Series is great. We drove a nearly identical car at launch, so this time around we’re giving our first impressions a stress test. And yet, if you read Consumer Editor Jeremy Korzeniewski’s take on the styling – crisp lines, tastefully shaped headlights, bulging fenders, all delicious – he zeroes in on the same issue: “the rear looks too derivative of the Lexus IS”. A shame. Luckily, headlights and taillights are the stuff midcycle refreshes are made of. Expect drastically redesigned rear units in a few years – we hope. Then again, scope the 330i in a good color (like this one) from a front three-quarters view to appreciate its masterful styling – obviously a 3 Series, but new and fresh – and the taillight gripes fade away. Even better, look at it in direct profile, and the long hood and short rear decklid with a prominent upward turn, and it seems like the 3 has its mojo back. 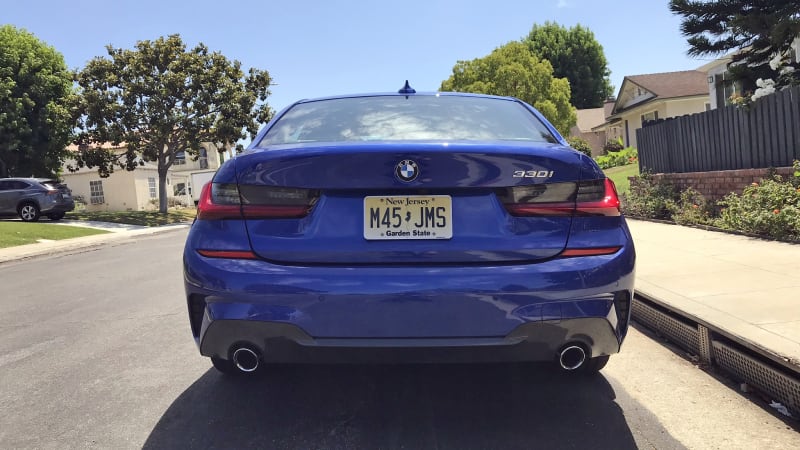 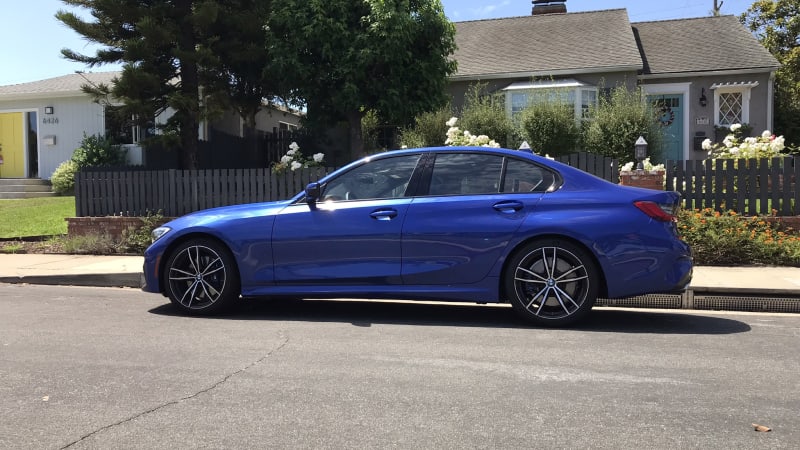 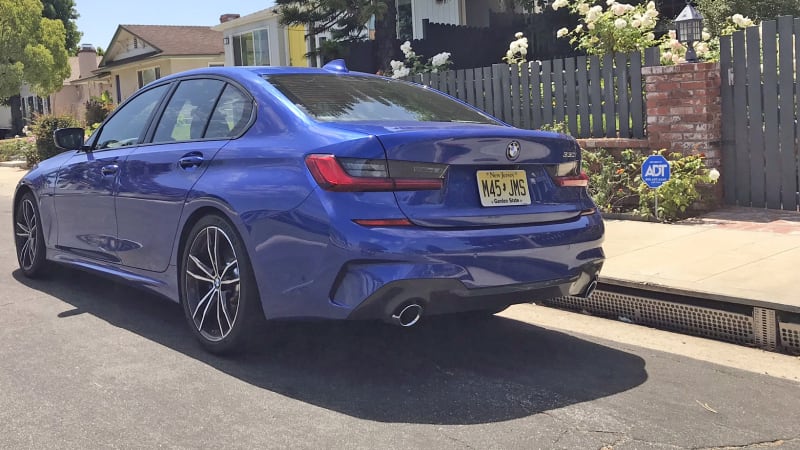 The powertrain is going to be a little harder to fix. Here again, there’s good and bad. Like Jeremy, I found the 2.0-liter turbo inline-four, which makes 255 horsepower and 295 pound-feet of torque, to be plenty in everyday driving. What it lacks is specialness. Roll down a window, and it’s a hoarse, clattery thing – obviously a work-a-day, direct-injection, forced-induction unit. BMW joins a long list of automakers that are reliably making decent power and respectable economy from these similar 2.0 turbo engines, and that’s admirable. But to accomplish all that, it seems like you need to sacrifice the less tangible things. It’s potent, but I challenge anybody to love this engine. As the volume model, the one that serial BMW lessees in places like LA are going to gravitate towards, that extra special sauce isn’t going to matter.

That said, all BMWs once had that special sauce, just by virtue of being a BMW. The upcoming 2020 M340i might scratch that itch. Jeremy had a too-brief experience in it, and we’ll have to get more seat time to evaluate that.

One thing that wasn’t missed? The manual. I personally don’t miss it in urban traffic. The eight-speed automatic is damn good. But here comes another caveat – whether it’s a throttle tip-in calibration issue or something else, this car struggles to move off from a dead stop smoothly. The BMW X2 M35i I just had struggled with the same thing. I chalked it up in that car to a combination of overly-sporty intentions and underwhelming hardware not playing nicely together, but maybe there’s a broader issue. Speaking of sporting intentions and underwhelming hardware, I have some thoughts about the available options on this tester. First and most importantly, the Track Handling Package includes an M Sport active rear differential, M Sport Adaptive Suspension, and M Sport brakes. The rear differential is entirely wasted in normal driving, and really the M340i or M3 are going to be better choices for track work. The grabby brakes make stopping smoothly in regular driving a real chore. But the adaptive suspension is really good, even on L.A.’s concrete catastrophes known as freeways. Sure, it’s stiffer and lower than the base suspension, but BMW has not lost an iota of its handling magic. I found the electronically-controlled adaptive dampers to provide a firm, controlled, but ultimately comfortable ride. It felt a bit sporty, but entirely within the character of a sport sedan, and only jostling on the roughest patches that you’d expect any vehicle like this to buck at. The delta between Comfort and Sport handling modes seemed, in urban driving, not especially large. Other reviewers have said to avoid the M Sport suspension unless you’ll be doing serious canyon carving, but I disagree – it’s great.

The Track Handling Package is available on any flavor of 330i, and at $2,450 is worth the price of entry just to get the adaptive suspension. But the M Sport package, which is an eye-wateringly expensive $5,000, perhaps isn't as much. It includes non-adaptive but stiffer dampers, but is also bundled with a bunch of non-performance-enhancing stuff, like a one-year SiriusXM subscription, and includes the lousy variable sport steering. I’m not sure I agree with Jeremy’s assessment that this variable-ratio electronic rack is better than the previous generation. I felt more weight but not a significantly greater amount of feedback in Sport mode. And you can’t blame the rubber at its four corners for the lack of information coming up from the roadway, since the Michelin Pilot Sport4 S tires are fantastic. Here's a strong recommendation: just skip the M Sport package and opt for the less expensive and more rewarding Track Handling Package if you want better handling. 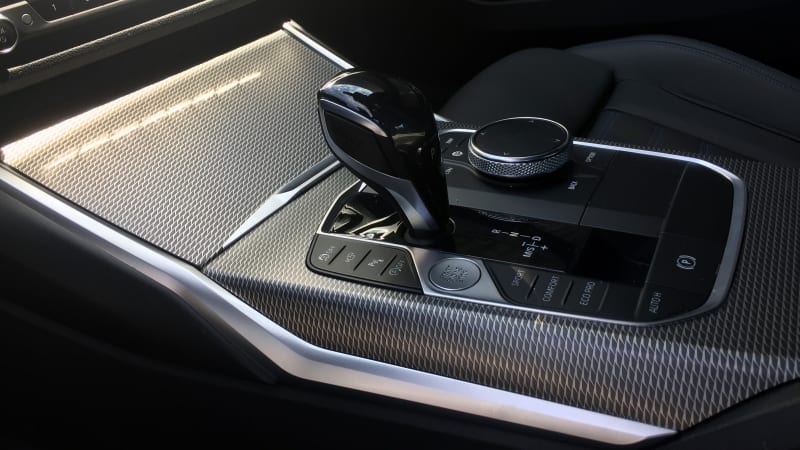 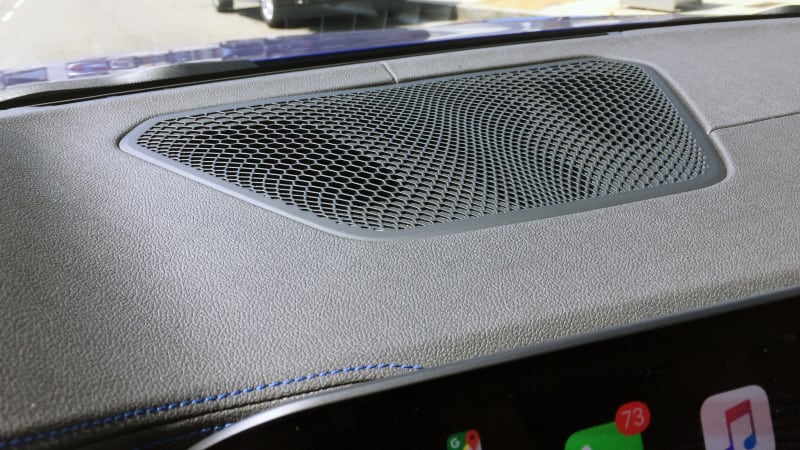 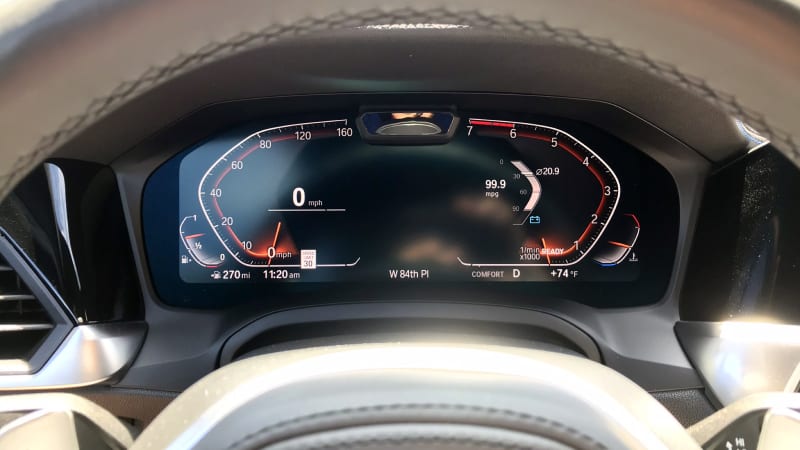 So is the interior, with – again! – a few caveats. The seats look great and are all-day comfortable, with a zillion adjustments. The digital dash, which is optional, is sharp, clear, and tasteful – although it’ll hurt those sentimental for the iconic, classic dual analog layout – and works beautifully. Not so with the infotainment system, now called BMW Cockpit. Its gesture control system is befuddled by those who talk with their hands to a passenger, and its wireless CarPlay function is unreliable at best. The shapely dash is let down by some frustratingly cheap elements – the quadrangular plastic grille above the infotainment screen, for instance, is prominent and hideous.

The “aluminum tetragon trim” looks awful, like a cheap decal applied to plastic, and it’s all over the dash and console. While it’s exclusive to the M Sport Package, you can option any of the other trim styles, and I highly recommend at least looking at the two aluminum pattern trims in person before ordering a 330i. Tastes are subjective, and some might love it, but the consensus around here is that it misses the mark.

Most of the caveats I’ve mentioned, save the steering and the rear styling, can be fixed with a smart build – choosing packages and aesthetic elements that suit the car and its intended purpose more empathetically. And the gripes shouldn’t overshadow the fact that this new generation 3 Series has very good bones, particularly in the handling and comfort departments. On that, Jeremy and I are in perfect agreement.

This article has been revised to clarify the contents of the option packages. 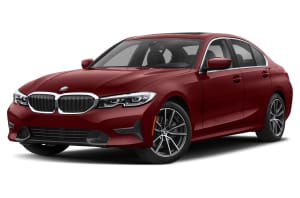