Inside the restoration of the 'lost' Peter Max Corvettes

The collection of 36 cars will be restored to benefit charity 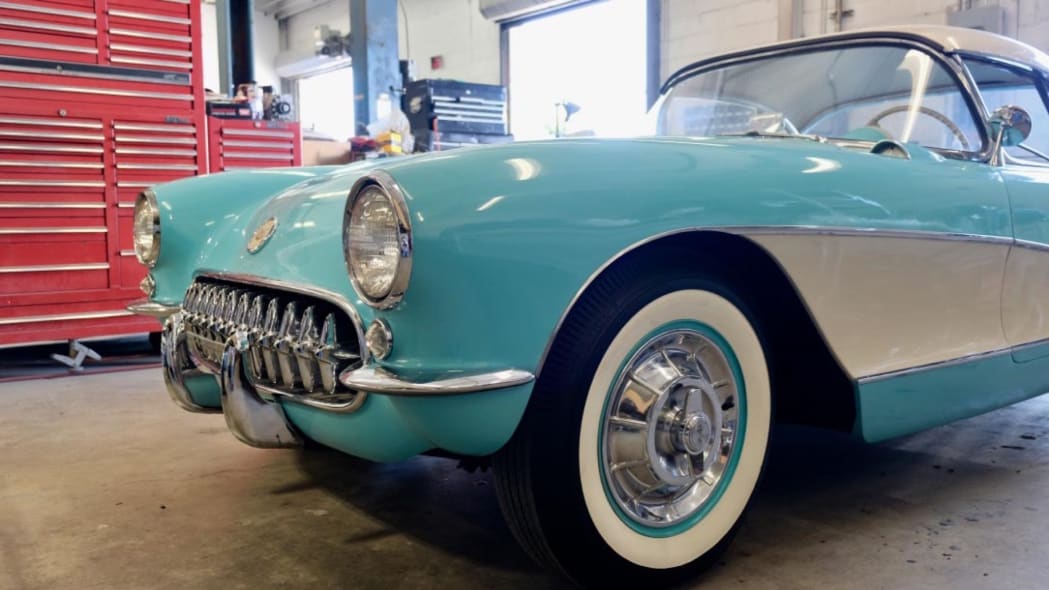 HICKSVILLE, New York —Nose around a nondescript industrial park on Long Island, and you’ll see something strange, yet wonderful. Vintage Corvettes, everywhere. A family of such sheer, crossed-flag variety that a car fan would instantly wonder what the hell was going on. There are Coke-bottle-shaped third- generation cars, that so brightened the golden age of muscle in 1968, but lapsed into flabby, disco-ball status by the late ‘70s. The incomparably prized “Mid-Year” Sting Rays – two words, please – of 1963-67. The romantically styled, hopelessly mild inline-six Corvette that GM nearly euthanized after its lousy showroom reception in 1953, only to have Corvette godfather Zora Arkus-Duntov rescue and legitimize the breed with V8 engines, fuel injection and Daytona Beach speed runs.

So, what are they all doing in Long Island, a single specimen of every Corvette model year from 1953 to 1989? (And no, there’s no ‘83 model). Remarkably, they’re part of a single collection, and the most spectacular barn find – if a Manhattan parking garage can be called a barn – in Corvette history. The 36-car collection was first assembled and given away by music-video network VH1 in a nutty promotional contest in 1989, to a winning Long Island carpenter named Dennis Amadeo Amodeo.

But the collection was soon purchased by the phenomenally successful pop artist Peter Max, who intended to use the cars for an art project. Instead, the German-American Max – whose work captured the psychedelic, flower-power spirit of the Sixties like few artists – lost interest and left his ‘Vettes to rot for 25 years in public garages in New York. While his cars slumbered under a blanket of dust, the Corvette went through three generations before finally being acquired by a pair of New York real estate families in 2014. 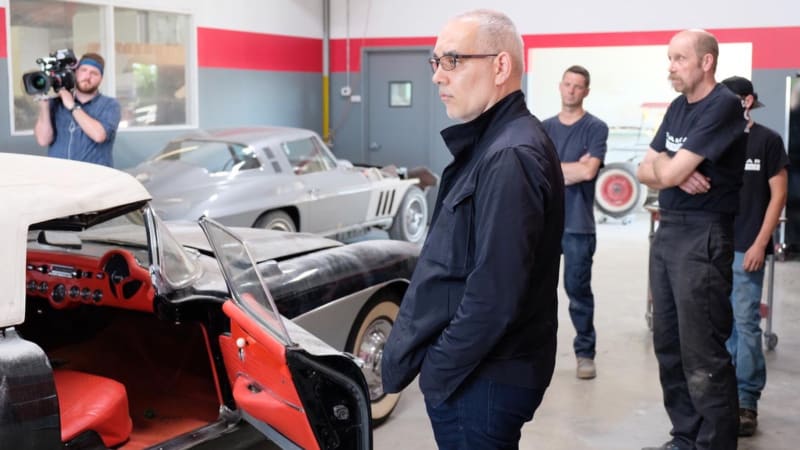 Enter Chris Mazzilli, a lifelong Corvette aficionado, and founder and co-owner of Gotham Comedy Club, who was tapped to bring these sorely mistreated Chevys back to life. At his Dream Car Restorations shop in Hicksville, Mazzilli recalls stepping into a garage in New York’s Flatiron district – the building had once housed a Packard dealership – and first laying eyes on the notorious Peter Max Corvettes.

“I walked into that garage, and the hair stood up on my arms,” Mazzilli says. “We came out, and we were just black, covered in soot.”

The cars had been shuttled, together, around various garages in New York, and seemingly hadn’t been cleaned in a quarter-century. And while some models were in surprisingly passable shape – aside from being encased in dust and grime, like sarcophagi from the Chevy Dynasty  – others were not.

“Workers had been winching the cars around, crap was falling into interiors, people had been stealing parts off ‘em. It’s just amazing that all 36 of these cars stayed together in one place.” 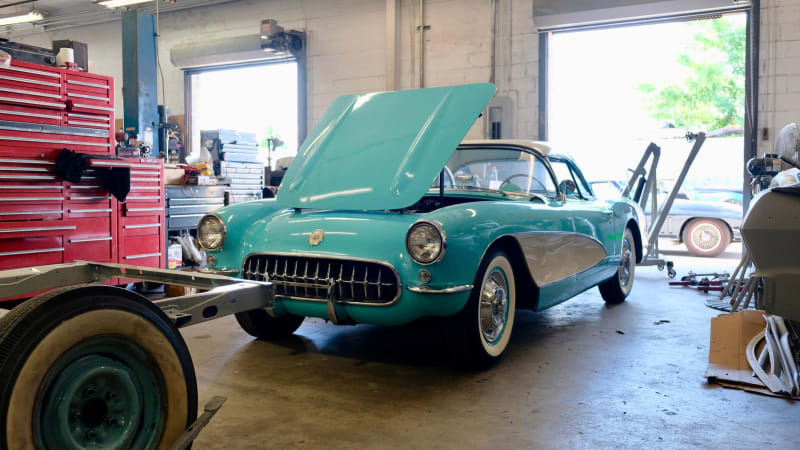 I wander around the bustling shop, surrounded by Corvettes, Camaros, Chevy Bel-Airs, or the odd Mopar, in various stages of repair. I’m mooning over the collection’s ‘56 Corvette – in a rare, factory seafoam paint called Cascade Green, with contrasting white “coves” – when Mazzilli jogs my memory as to where I’d seen it before. It’s the one that Jerry Seinfeld drove with Jimmy Fallon in an episode of “Comedians in Cars Getting Coffee.”

As we’re chatting, four workers in tattered shop pants roll a faded 1986 Corvette into a bay, and pop its fiberglass clamshell hood, revealing the small-block, 350-cubic-inch V8 below. That fourth-generation Corvette, the first to be built in Bowling Green, isn’t the prettiest or the most powerful. But it’s an increasingly charming time capsule of its Eighties era, including what was then a global automotive first: A digital dashboard, with three liquid-crystal displays (that updated 16 times per second!), and that recalls the Pontiac Trans Am-based K.I.T.T. from the kitsch-classic Knight Rider television series. The digital cluster, prone to permanent darkness and produced from 1984-88, might have been a mechanical nightmare, but it was also “way, way ahead of the curve,” Mazzilli says. 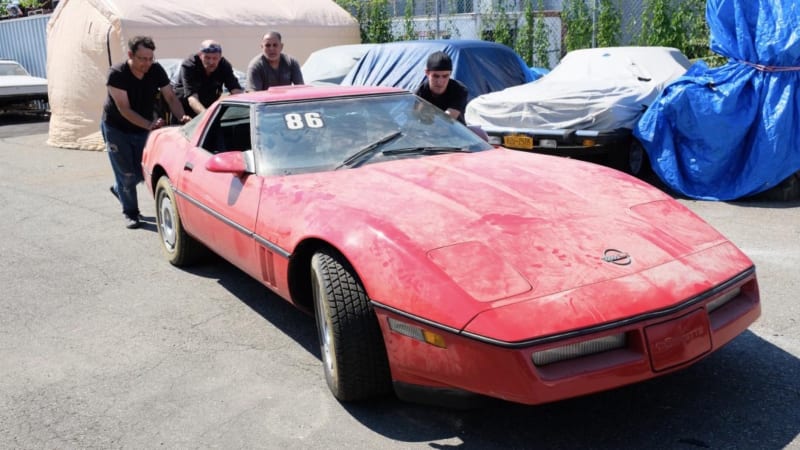 On this day, a crew from the History Channel is visiting the garage, chronicling the restoration of the Peter Max cars for a documentary that will air in the fall. Back in ‘89, Mazzilli explains, VH1 was merely looking to hastily assemble a gaggle of Corvettes, so there aren’t many especially rare specimens: No Fuelies, for one, and no thundering big-blocks. It’s one reason that the restorations mostly aren’t aiming for the show-pony levels of, say, Bloomington Gold Corvettes. Yet some cars are receiving special TLC, including the pampered ‘53 car – painted Polo White, the only color offered on the 300 copies produced in that inaugural year. That one, No. 281 of the 300 cars, is being treated to a full, frame-off restoration, as you’d expect for a Corvette that’s valued at $500,000 or more in pristine condition.

Yet for Mazzilli, a longtime judge at Corvette events who cites – in order – the 1967, 1969 and 1957 models as the most sought-after by collectors, every ‘Vette has its charms. Yes, even the 1975 C3 model, from the dark ages of the first catalytic converter era, whose strangulated base V8 put out a paltry 165 horsepower and 255 pound-feet of torque, and that with a four-barrel carburetor. 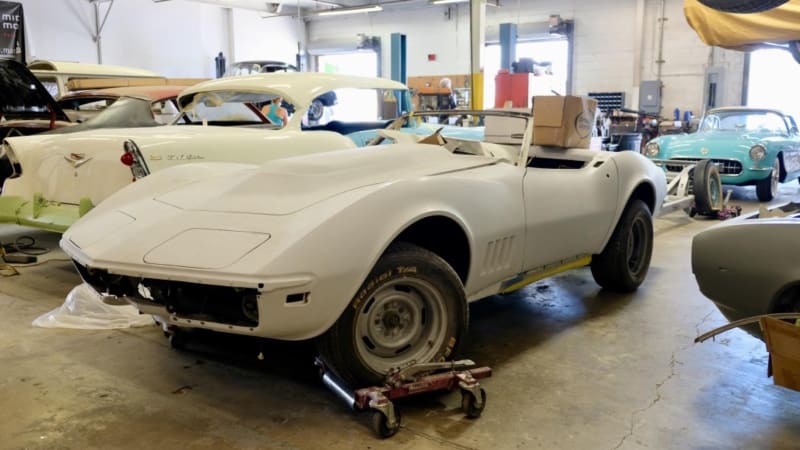 “Sure, you’ll lose a race to a minivan, but it’s still a cool-looking, nice-driving car,” he says, like a proud father who refuses to choose a favorite child.

This papa has birthed an orphan, however: Mazzilli and Co. have designed and built a so-called “Lost Corvette,” the subject of another History Channel show: Their personal take on what a 1983 Corvette would look like, if GM had actually produced one in that gap year between the C3 and C4.

For Mazzilli and his team, the first move was simply to get the neglected cars up and running. Now comes the hard part. The owners, who once considered auctioning the cars, now intend to unload the collection to benefit veteran’s charities, including the National Guard Education Fund. Ironically, the owners have put together another Corvette sweepstakes, 30 years after VH1’s big-haired original, with winners to be announced early next year. Which means Mazzillli and his roughly 11-member crew must hurry, suddenly tasked with restoring roughly one car each week to complete them in time. It’s a brutally tight timeline. But Mazzilli, whose watchful manner and permanent poker face suggests he’s the coolest cucumber in any room, is confident his crew can pull it off. 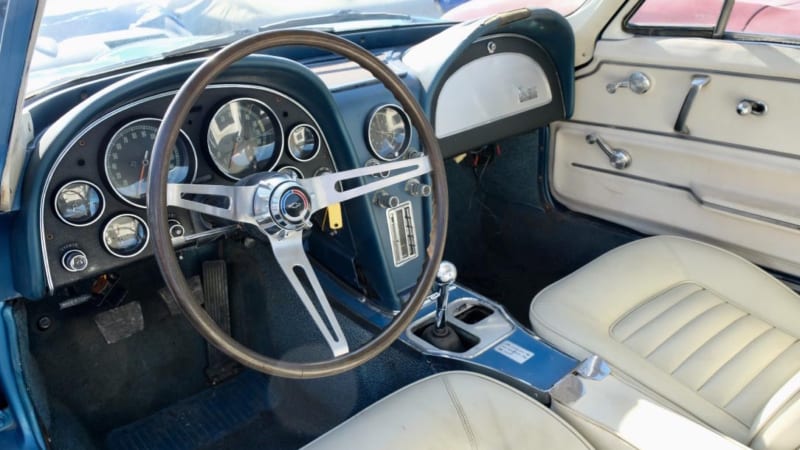 Wisely, this time there will be 36 separate winners for 36 Corvettes, rather than a single grand-prize winner who – like blue-collar Dennis Amadeo – might be overwhelmed by a showroom’s worth of vintage cars to store and maintain, and would quickly look to sell them. And the idea that 36 winners will either reawaken their passion for Corvettes, or fall hard for the first time, is just what Mazzilli would want.

“It’s going to be a big accomplishment,” he says of the project. “I really hope the winners will just get in the cars and drive them. I always want there to be more Corvette fans.”