Only 60 will be produced 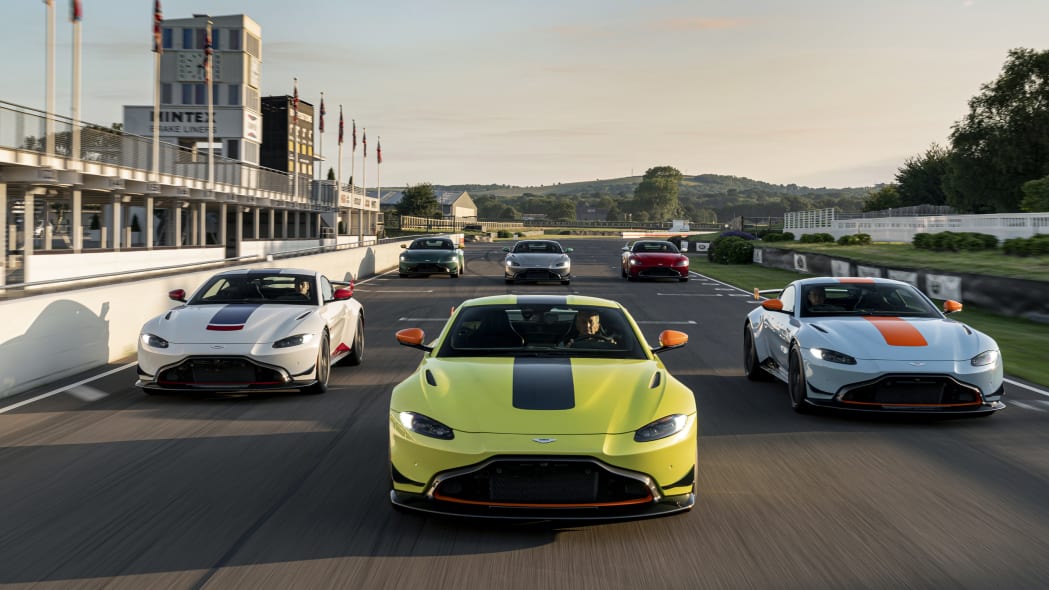 Each year at the Goodwood Festival of Speed, enthusiasts are met with an artistic white sculpture that represents a unique part of automotive history. For 2019, the Central Feature, as it's called, highlights Aston Martin with a DBR1 frozen high in the sky.  Celebrating 60 years since Aston went 1-2 at Le Mans and 70 years since the company first raced at the Goodwood Motor Circuit, Aston Martin also unveiled an aero kit and the Heritage Racing Editions for the Vantage coupe.

Crafted by Aston's bespoke division "Q", only 60 examples of the Vantage Heritage Racing Editions will be made, each acting as an homage to a historic racecar from the company's past. The green and silver Vantage, named "Razor Blade," has been color-matched to a racer that set records in the 1500-cc light car class at Brooklands in 1923. The red example with Aston Martin lettering, "The Italian Progettista", is a call to the Ulster, which Aston calls its most iconic pre-war racecar. It finished third overall at the 1935 24 Hours of Le Mans and finished fourth in the RAC Tourist Trophy Race.

The "David Brown Era" Vantage seen in yellow and green is inspired by the DB3S from the '50s. The red, white, and blue Vantage, dubbed "The Group C Monster", celebrates the AMR1 racer. At the time of development in 1989, the AMR1's use of a kevlar and carbon fiber monocoque was cutting-edge. The "Le Mans Winner" Vantage wears the Gulf livery and nods to the endurance racing series that Aston Martin has participated in since 1928. Lastly, the Lime Essence and Stirling Green Vantage is a hat tip to the current Vantage GTE racecar that competes in the FIA World Endurance Championship.

The special-edition models also debut a new aero kit that will be available on all Vantages. Thanks to a carbon fiber rear wing, dive planes, an extended front splitter, the kit produces an additional 428 pounds of downforce at 190 mph. Each car has lightweight wheels, the Sports Plus Pack, and interior carbon fiber features for additional weight loss.

Aston Martin has yet to announce pricing or availability, but all six special-edition cars can be seen next to the Central Feature throughout the Goodwood events.