Excessive speeding will do you in every time

Zac Palmer
Canada doesn't mess around with excessive speeding, as a McLaren 600LT owner just found out the hard way. The West Vancouver police department caught the 39-year-old McLaren owner doing 161 km/h (100 mph) in a 90 km/h (56 mph) zone. Unfortunately for the owner, Canada impounds cars for speeding that much, and so police impounded the McLaren. The real kicker? This guy had taken delivery of the brand-new car only 10 minutes prior, according to a police statement and local news reports. Tough luck.

Getting up to 100 mph in a 600LT takes only about 6 seconds from a dead stop. Yeah, cars are fast these days — the 600LT and 600LT Spider are especially fun to drive. Though we're guessing any sort of plea along those lines would not have worked on the officers in charge of this decision. West Vancouver police took the liberty of photographing the car, using it as an example to other would-be supercar speeders. They also ticketed the driver $368 Canadian for the infraction. Frankly, the $368 fine can't be much of a deterrent for folks who can afford an over-$240,000 car. It's the weeklong separation from the car and dinged license that probably hurt the most.

Under British Columbia law, speeding at 40 km/h over the posted speed limit results in the immediate impoundment of the car. That's equivalent to about 25 mph over the limit. This McLaren was doing 70 km/h over. So, anyone driving through British Columbia not wanting their car to be impounded, make sure to keep your speed in check. Even more so if you happened to just pick up a brand new supercar. 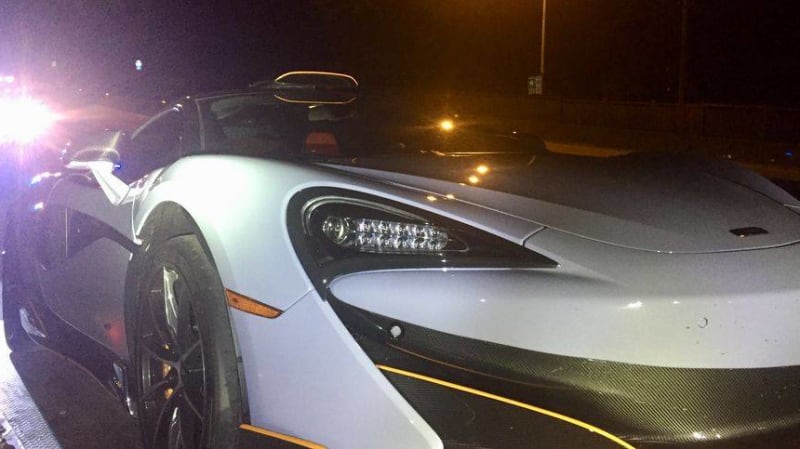