Mercedes-Benz has repeatedly had to relearn a simple lesson: An air of European sophistication doesn't make a car sold overseas play in America. The circa 2001 C-Class hatchback was a poor fit, but the GLA and CLA have since then come closer to the right formula for both sides of the Atlantic. The new A-Class, coming to our shores as an A 220 sedan, is even better suited to our tastes.

Note that this isn't a CLA replacement. The CLA is a "four-door coupe", and the A is a proper sedan. They're certainly similar – two front-drive-based four-doors below the C-Class – but the CLA will soldier along for a bit, analogous to the CLS and E-Class situation. So Mercedes says. The new, sharp lines of the A-Class and the age of the CLA, which debuted in 2013, can't be discounted.

Actually, the styling is smooth and clean; a couple of character creases, but everything else is an exercise in reduction. There's a more conventional pertness to the rear, a short overhang without the droop present in the bigger C-Class. Contrast the more unusual proportions of the CLA with the A's smaller, more angular headlights set more flushly into a handsomely upright fascia. Less is more, we think. 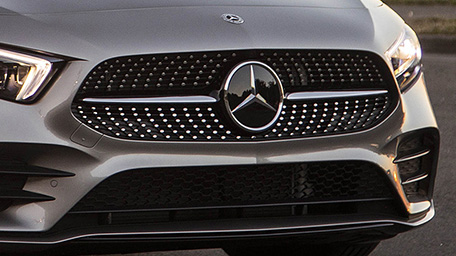 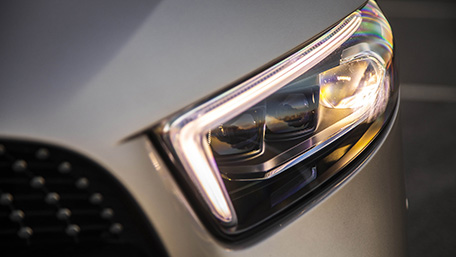 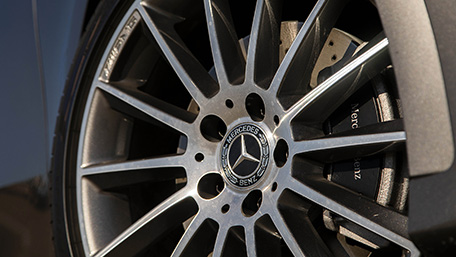 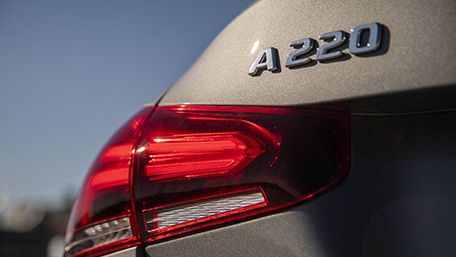 The interior of our loaded-up Premium Package A 220 isn't understated in the least, an ultra-contemporary riot of color and texture. Dive into a tunnel and the ambient lighting, backlit metallic eyeball vents, and dual screens all scream for your attention. It's shock and awe with a whiff of a Virgin Atlantic cabin – sparkly like a fishing lure to hook a buyer. Will it age well? Will buyers look closer and find the rough edges and cheaper materials otherwise hidden by the glare of the flair? Who cares? Sell the thing and move on. At least there's no more hand-wringing about whether this sort of thing will put off "traditional Mercedes buyers" – everyone wants tech-forward, youthful signaling, and the A Class delivers.

There's much less emphasis on the mechanicals, not nearly so flashy as the tech-intensive interior experience. The turbocharged 2.0-liter inline four, rated at 188 horsepower and 221 pound-feet of torque, makes the A 220 swift but not thrilling – and less powerful than the CLA 250. A 7-speed transaxle sends power to either the front wheels, or in 4Matic guise, all wheels. There are wheel-mounted shift paddles, but based on slow responses and a tendency to second-guess the driver's inputs, it's best to leave it to fend for itself. That's probably OK – and the AMG A 35 (and maybe A 45) will be the car for the other type of buyer.

188 horsepower isn't a lot these days, but the torque comes on richly, and the A 220 doesn't seem to weigh much. About that: we don't have a curb weight. Mercedes wouldn't provide even a ballpark. Same goes for a lot of other specs. These are pre-production cars, and the specifications may change before it goes on sale, but it's frustrating to not even have estimates to share with you. 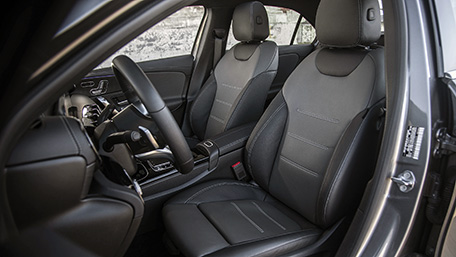 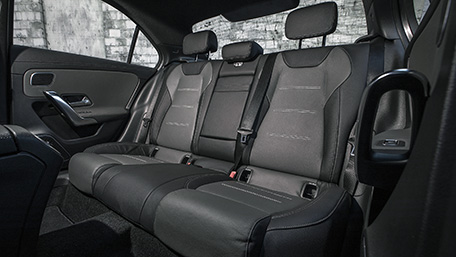 Base A 220s have a torsion beam rear axle, but all-wheel drive models and front-drive cars with larger wheels or adaptive dampers feature a multi-link design with torsion bars at both ends. There are several available suspension tunes: comfort, "lowered comfort with AMG Line", or an adaptive suspension.

Both of our test cars were fitted with the AMG Line suspension and the same wheel and tire package. Cornering is about the same for both, with roll well-controlled, but the ride quality in a straight line was drastically different. The 4Matic car is poorly damped, bouncing on its springs over every road imperfection – enough, probably, to induce carsickness in those prone to it. Contrast this with the typical European-style damping of the front-drive car, firmly absorbing most bumps with a bit of crash over larger ones. The optional 19-inch wheels are probably responsible for the crashiness, and other trims will offer smaller sizes. But we have no idea how to explain the discrepancy between the two ostensibly equivalent suspensions, which other drivers reported in their 4Matic cars. We hope Mercedes makes an adjustment here before the cars go on sale. As it stands, the front-driver has a vastly superior ride.

This is a compact car, but save a lack of driver headroom the rest is reasonably sized. The front seats are bolstered enough to hold the front passengers in place without jostling the kidneys. One tester had full leather seats, the other had microfiber inserts – both looked and felt premium. The rear seats fit my frame nicely (I'm 5'10", about 155 lbs) although there wasn't much extra room for knees with the seat in front set for a similarly-sized adult. Behind the seats, the trunk looked big enough to swallow three or four roll-aboards. Again, we don't have interior volume numbers to share, but no part of the interior seems unusually cramped. 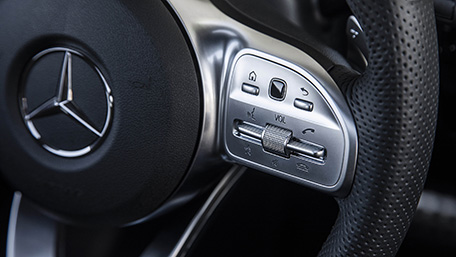 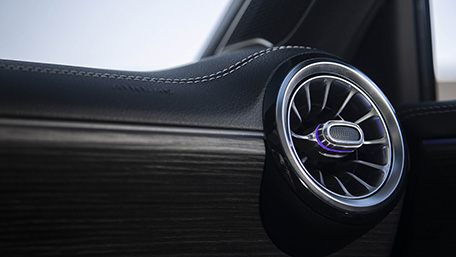 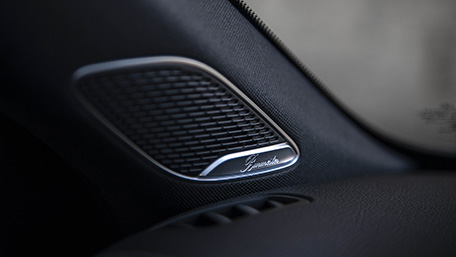 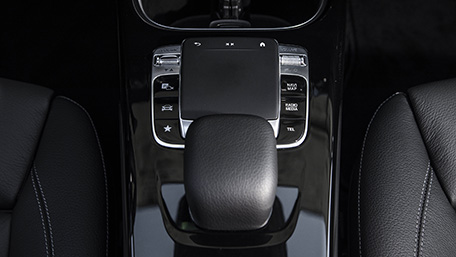 The interior space in the A 220 is dominated by the MBUX infotainment experience and the optional twin 10.25-inch screens (dual 7-inchers are standard). The right-hand screen is now a touchscreen, with a little touchpad on the center console and two little thumb controls on the steering wheel as alternate interfaces. The other interface is aural – say "hey Mercedes" and it'll ask you what you want to do. More accurately, say pretty much anything and then "Mercedes" – like "my Mercedes" or "that Mercedes" – and the system perks up, hoping you'll ask it to do something.

What it can do, theoretically, is ambitious. Natural language recognition and cloud-based processing should allow you to ask it for "the top-rated Mexican restaurant with burritos nearby" or a similarly-complex query, and it'll actually parse that and give you a few options. In the real world, not every question like that generated a real response. More aggravatingly, MBUX won't tell you what about the question was unclear – not that we expected it to, since that's not in the billing for MBUX. But after using it, that's what we want.

After a lot of "hey Mercedes" testing – and a lot of unprompted interruptions from MBUX hoping we were asking it something – we found out you can turn it off in the system menu. You can still press the speech button on the steering wheel, like long pressing on the home button on most iPhones, and the system will bring up the speech recognition prompt. But there's lots of potential here. It's hooked up to the car's physical systems – the HVAC, even a little reading light in the mirror, that sort of thing – so you don't have to dive into settings menus to adjust some things. Otherwise, the touchscreen reacts quickly, and the new menu formats work well. The touchpad is even intuitive – something that Lexus engineers should inspect carefully. 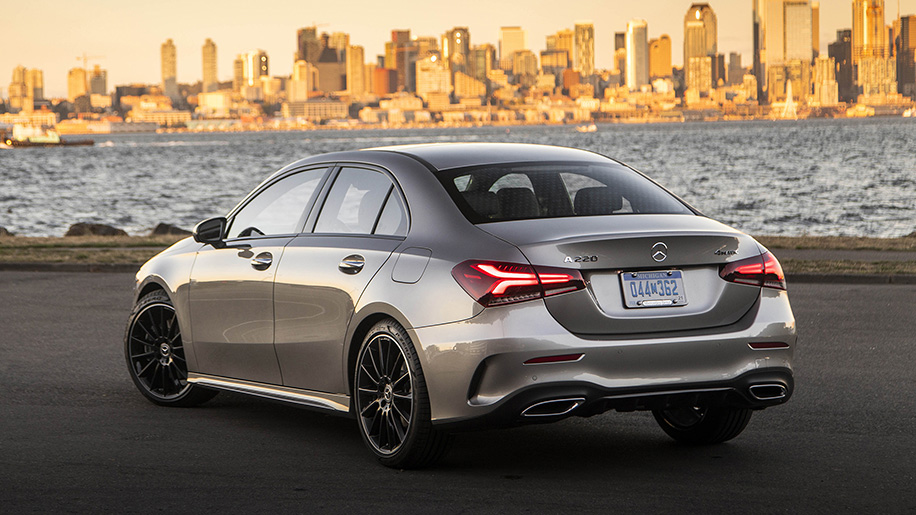 For all the promise of the A-Class it'd stand out more if it didn't share a showroom with two older counterparts occupying the bottom rungs of the Mercedes ladder. The older, dowdier CLA theoretically is positioned above the A 220, and the GLA sits in the hot crossover segment. Were neither to exist, we think Mercedes would have an easier time explaining this car's purpose to potential customers. Given the flashy new interior and tauter exterior, would you want to be "upsold" into a CLA? By the way, pricing is also TBA, but given the CLA 250's roughly $33,000 starting price, we expect it to start just below that. Given our tester's extensive options list, we were probably driving $45-50,000 cars.

At least the competition is slim. The A3 has a minimalistic appeal, and Virtual Cockpit is neat, but the A 220 has up to 20.5 inches of screen to show off. Mechanically it's basically a draw, but the A 220 is also not insignificantly bigger. BMW doesn't have a direct competitor, but the 2 Series is within striking distance – and rear-drive based. Were it not for its stablemates muddying the sales pitch, the A 220 would make greater waves.

Excepting the confounding ride of the A 220 4Matic, the car has an inherent goodness to it. It's easily the most handsome of the brand's entry-level trio, comfortable for a long drive, sporty without being hard-edged, right-sized, and it offers an unparalleled interior experience at this end of the market. Considering all the A 220 does right, why does the CLA need to exist? The A-Class is more handsome, feels more premium inside, and is rakish enough to make the distinction between it and its "four-door coupe" counterpart seem academic. Even if you accept the CLA's existence in the lineup without question, drive an A 220 and you'll find it's the true Mercedes of compact sedans.