View All Specs
Add a Review
NAPA VALLEY, Calif. — In the past, the AMG formula was simple: Stick a big, powerful engine under the hood, sharpen the steering and suspension, and warm over the styling with some big wheels and subtle trim. They were comfortable and blazingly quick, but perhaps not the best-handling vehicles in their class — think muscle car by way of Germany. A trip to Northern California with the 2019 Mercedes-AMG E 53 sedan, coupe and cabriolet shows that although things have changed quite a bit since Daimler took control of AMG in 1999, at least one thing remains very much the same: most AMGs are powered by one sweetheart of an engine.

And there are more AMGs than ever, with 47 different variants in the U.S. — nearly every model variant in the Mercedes-Benz lineup has at least one AMG trim. It's all a bit confusing, to be honest. That said, in the E-Class lineup, there's a massive gulf in both price and performance between the burliest non-AMG E 450 at roughly $60,000 and the top dog E 63 S that's over $100,000. And that's where the E 53 fits in, much less expensive and hard edged than the E 63 S but offering a novel powertrain and other upgrades over the more pedestrian E 450.

In the E 53, the engine (codenamed M256) is a turbocharged inline-six paired with a 48-volt mild-hybrid system, that comes in two flavors in the U.S. — a 362 horsepower variants for cars like the CLS 450, and a 429 hp and 384 pound-feet of torque variant found in the E 53 triplets. The gasoline engine isn't hand-built like the twin-turbo 4.0-liter in the AMG 63s, but it's a technological wonder — and a finalist for our 2019 Technology of the Year award. This silky-smooth straight-six's party trick is how it uses the hybrid system to improve performance and efficiency, both on paper and in the real world. 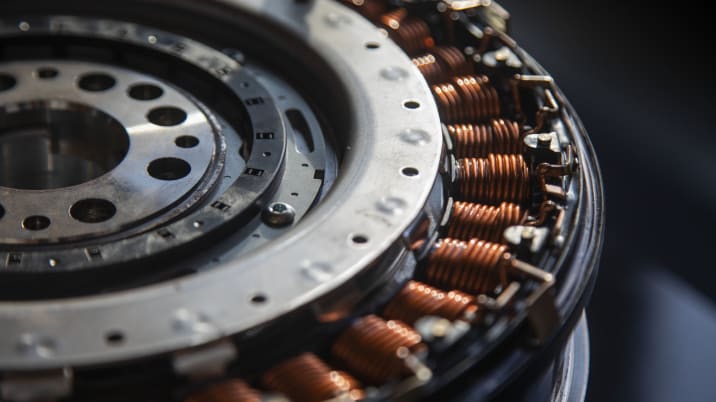 The key piece of tech here is the integrated starter — EQ Boost in Mercedes-speak — resting between the engine and the nine-speed automatic transmission and is the main component in the 48-volt system. In AMG 53 models, it powers an auxiliary electric compressor — basically an electric turbocharger — that feeds into a traditional twin-scroll turbo. The EQ Boost system can provide 21 horsepower and 184 pound-feet of torque for short periods, almost completely eliminating turbo lag as the compressor doesn't rely on the exhaust to build boost. While other cars use electricity to boost performance — the Acura NSX being a good example — most channel it through one or more electric motors. The Mercedes system is relatively novel, and admittedly rather complex.

From behind the wheel that complexity doesn't really matter much, since nailing the throttle provides the smooth, seamless response of a naturally-aspirated engine. It's quick — 0 to 60 mph in 4.4 seconds in the sedan and cabriolet, 4.3 in the coupe — but not shockingly so. The hills and curving roads around Napa proved that the inline-six provides just the right amount of power for the road. It never feels over- or undertaxed.

Some from last week in Napa with the E53 and CLS53. @MercedesAMG's new inline-six is a peach. Hoping it makes it's way to the C-Class sometime soon. @therealautoblog pic.twitter.com/2q4JuystIK


All E 53s use the rear-biased AMG Performance 4MATIC+ all-wheel drive system, which normally sends 100% of power rearward but can shift up to 50% forwards if needed. While grippy, the rear-drive bias does allow for some slip and moderate amounts of oversteer. Brake late, turn in, and the E 53 responds swiftly and eagerly. The steering is quick and talkative and translates the car's mass and the road surface without feeling overly heavy (though the ratio and weight can both be adjusted with various driving modes). Body roll is kept in check thanks to the AMG Sport Suspension and air springs.

There's no getting around the fact that these are heavy cars — between 4,341 and 4,566 lbs, depending on the body configuration. But then again, so is every other competitor. The adjustable suspension system allows the E 53 to be comfortable when cruising and taut when you want to push it. There were a few off-camber areas where the car felt a bit light and unnerved, giving you that light-in-the-seat feeling, but it nothing harrowing.

The transmission is one of the best torque-converter units we've tested, right there with the wonderful ZF 8HP that's in damn near everything these days. Shifts are quick and smooth, and the transmission is smart enough to be in the right gear when left to its own devices. The dual-clutch transmission on more powerful AMGs might shift quicker, but this version strikes a good balance between performance and refinement and feels decidedly old-school AMG in the best sort of way.

There's a toggle switch behind the cupholders that adjusts the five different drive modes: Eco, Comfort, Sport, Sport+ and Individual. Each mode changes the car's throttle, steering, suspension, transmission and exhaust. The Individual setting allows you to pre-program you desired setup, and there are dedicated buttons for the suspension and exhaust that allow the pair to be adjusted in any drive mode. 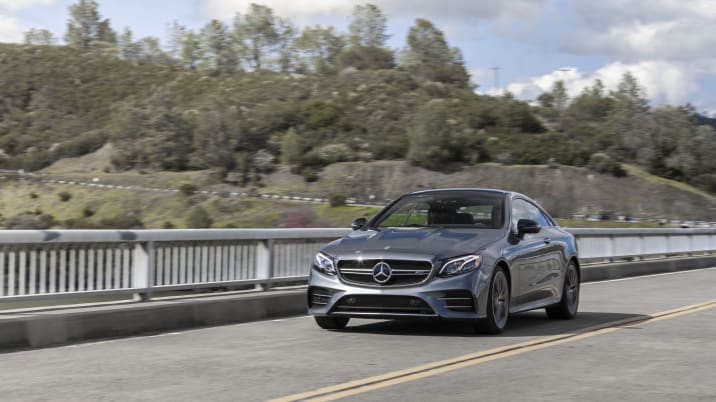 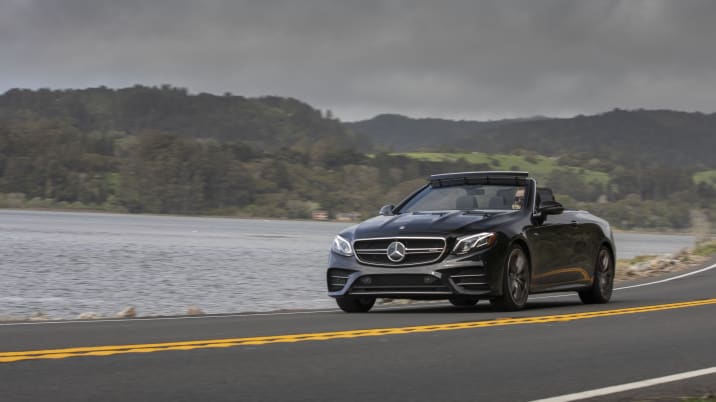 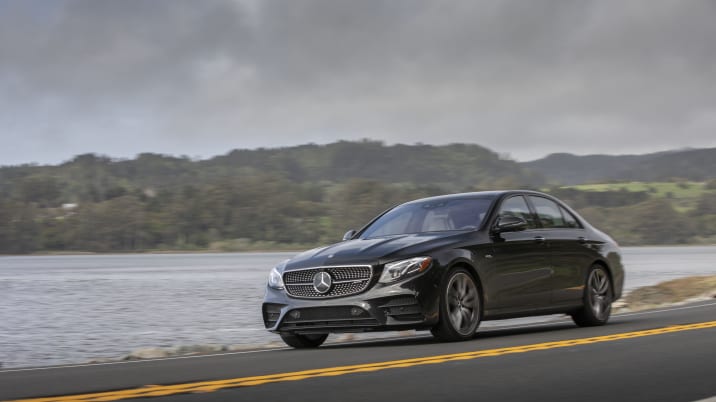 The E 53 sounds really good, at least with the active exhaust valves open. Otherwise it's a bit too quiet for something wearing the AMG badge. Some may consider the subdued nature a good thing, but we wish it was louder at idle, and even more boisterous with the valves open. AMGs are supposed to have big, burly exhaust notes to counter their conservative styling, and the E 53 just doesn't deliver the aural excitement we've come to expect. The 4.0-liter twin-turbo V8 in the E 63 pops, snarls and howls, but it's $30,000 more than the $72,550 E 53 sedan and not currently available in the $73,700 coupe or $80,350 cabriolet. (Interestingly, you can get the 4.0-liter in the smaller C 63 coupe and cabriolet.)

The quiet nature does make this a great GT, and that might be where this AMG shines. The 48-volt system runs all the accessories, so there's no belts running off the engine. This reduces vibration, already relatively low thanks to the inherent balance of the inline-six configuration, and improved fuel economy. The system allows for "sailing," meaning the engine can shut off at highway speeds under low-load situations. The 48-volt system can fire the engine back up in an instant – there's no shudder or delay when the start/stop system is engaged, be it on the highway or at a traffic light. Cruising on the highway is a delight thanks to the engine's refinement, relaxed suspension and supportive seats. 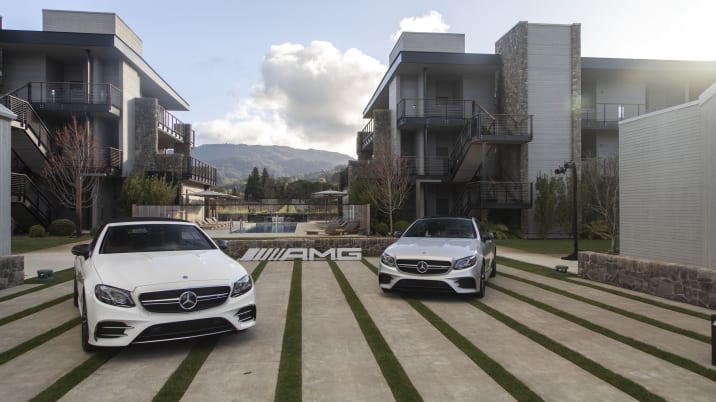 AMG, both as a brand and as a method, has changed a lot over the past decade or two. The exclusivity is now lost thanks to the breadth of the AMG portfolio. Still, they do feel different and far more potent than more pedestrian Mercedes-Benz products without losing any of the refinement. While BMW's M division (with some notable exceptions) has lost some of its edge in recent years, Mercedes-AMG has stepped up its game.

The E 53 might not be as forceful and loud as other AMGs, but with its mix of performance, comfort and efficiency, it's more well-rounded and a fantastic value at compared to the E 63 S. It loses some of the specialness you get with the top-level AMGs, but the E 53 still feels like a proper transformation rather than a half-hearted upgrade. More than anything, though, the new inline-six is a real peach. It's more than just a worthy replacement for the twin-turbo V6; It's a step forward for the internal combustion engine and honors decades of inline-six history in a thoroughly modern way. 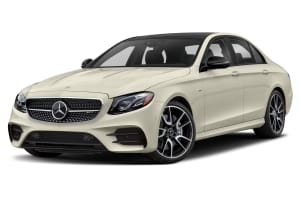