An M Sport-plus package with carbon bits front and back

Jonathon Ramsey
The Bimmerpost forum says BMW has a new appearance option coming for the 5 Series. Called the Carbon Edition, out of the dozen items included, four are carbon. Those additions are the M Performance carbon front splitter, front lips spoiler, rear diffuser, and pro rear spoiler. There's also a "Carbon Edition" badge, but we can't tell whether it's made of carbon fiber.

The option can be fitted to the 530i and 540i in rear-wheel drive and xDrive, but not to the M550i nor on the 530e iPerformance models. Available in the second quarter of this year, the Carbon Edition ups the price by "approximately" $4,668, according to Bimmerpost. On the 540i, that would equate to a roughly $400 surcharge for the carbon bits, rear bumper treatment, decals, and badge. That's because the M Sport trim on the 540i costs $3,600 and includes Black Dakota leather and M Sport Wheels, while the M Sport brakes cost $650. The M Sport Package on the 530i costs $5,050 because it upgrades the interior leather, so the Carbon Edition could be a decent bargain depending on the model chosen.

Forum users think this could be a plumper for end-of-model-year production, since BMW often begins building cars for the next model year in July. 5 Series fans expect some kind of upgrade to the midsize sedan for 2020, either in the engine bay or the move to BMW's latest dash cluster and iDrive 7. 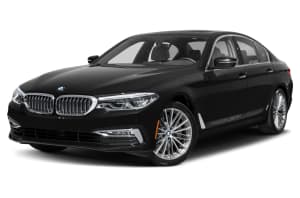