Here are C-HR and IZOA, the first fully electric Toyotas for China

Toyota has officially unveiled its C-HR-based electric crossovers for the Chinese market. The GAC Toyota-built electric C-HR and the FAW counterpart, IZOA, appeared at the Shanghai Auto Show today. The models are the first fully electric Toyotas for China, and sales begin next year.

No figures have been released for the electric twins, nothing about the attainable range, available power or performance, but more information is sure to be made available later. The C-HR rides on the same TNGA platform as the new Corolla, so the BEV-ization of the Corolla is surely just a matter of time, and it's not unreasonable to expect a global fully electric variant of both the Corolla and C-HR in the near future if the Chinese endeavor is anything to go by. Still, as recently as late 2017, a Toyota executive said that "long range" battery electric cars were not part of the plan because of the time it takes to charge them, but that a new quicker-charging solid state battery was in the works for early next decade.

For the Chinese market, the Shanghai show's Toyota stand also features hybrid models of the RAV4 and the Alphard/Vellfire, and plug-in hybrid versions of the Corolla and Levin. 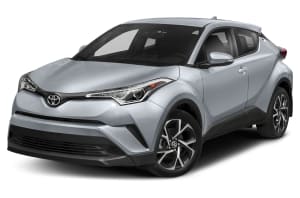