Tony Markovich
Each year, mobility data company Inrix conducts a traffic and congestion study that covers six continents, 38 countries, and more than 200 cities. According to its 2018 findings, L.A. no longer reigns as the worst city for driving. That crown now belongs to Boston.

Inrix bases its rankings on two things: hours and money lost to traffic (Inrix defines hours lost as "the total number of hours lost in congestion during peak commute periods compared"). For 2018, the five most congested cities in the country were Boston, Washington, D.C., Chicago, New York City and Los Angeles. This goes against the general assumption that L.A. and NYC have the worst traffic in the country. 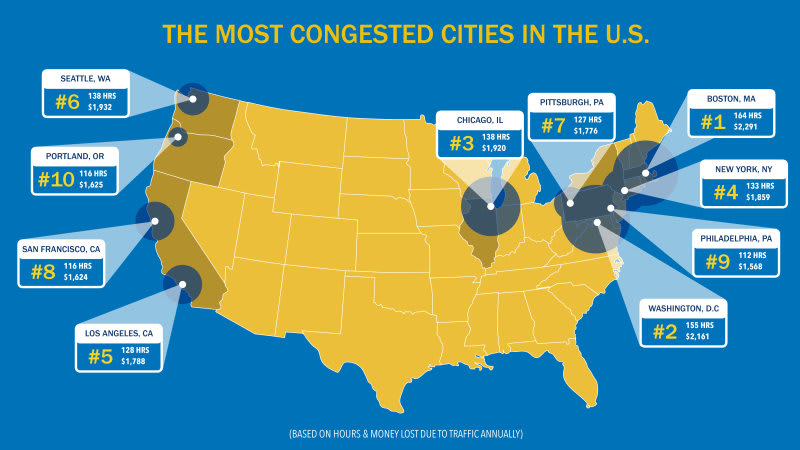 Although this sounds horrible (and it is), America's traffic is light in comparison to congestion around the globe. Judging by hours lost only, Boston ranks No. 26 in the world. The average driver in Bogota, the worst city by this metric, lost 272 hours, while drivers in Rome lost 254, and drivers in Dublin lost 246.

Based on Inrix's impact ranking, which measures the impact that congestion has on a city based on population, commuting behavior and individual congestion delay, Moscow, Istanbul, and Bogota are the worst. The full 2018 Global Traffic Scoreboard, including a helpful infographic, can be found on Inrix.com.

Just remember, when traffic gets to be too much, the car is a perfect place to practice your mad rhyme skillz: