Future-proofing the 911 doesn't break the spell

View All Specs
Add a Review
VALENCIA, Spain — Every new 911 presents a potential existential threat to Porsche purists, and the eighth-generation Porsche 911 is no exception. Has the 2020 model lost the quirks that define its inherent 911-ness? Is the legendary sports car evolving into anonymity? Those questions loom large, and despite its familiar shape I'm intensely curious about the answers I'll discover.

Externally at least, the new 911 looks bigger than its predecessor. But those looks are somewhat deceiving. While the wheelbase remains the same, the outsized presence comes from a widebody setup shared, for the first time, with both rear- and all-wheel drive cars. Its swollen rear haunches and wider front axle create a Coke bottle form last seen in the 993-generation 911 produced between 1995 and 1998. It's also the first 911 with staggered-diameter front and rear wheels, sporting 20 and 21-inch rims wrapped in 245mm and 305mm Pirelli PZero rubber. The stance is more purposeful and poised, and its bodywork flows smoothly throughout.

Porschephiles already dissecting the new model's departures from tradition will likely catch a not-so-subtle change in the cabin architecture. The dashboard panel, which previously featured a vertical arrangement of binnacles and controls, returns to a more traditional shape that recalls the wing-like structure from pre-996 era cars. It's an elegant look, making the cabin feel at once spacious and streamlined. A thin strip of upward-facing real estate can be trimmed in materials like leather, carbon fiber, or wood (which, unlike most modern implementations, doesn't feel forced or anachronistic).

Switchgear has also been modified, pairing a simpler interface with a big 10.9-inch touchscreen and five knurled toggles that activate with satisfying clicks. Thankfully the 911 avoids the glass panel haptic setup in the Panamera, retaining the physical feeling of buttons and dials while avoiding the silliness of HVAC vents operated via an electronic menu. The big, analog tach remains (albeit subtly redesigned), flanked now by unobtrusive digital screens. Oh, and those flat panels next to the new 8-speed PDK's shifter are simply saving space for the manual transmission that arrives later this year. Purists, you can exhale now. 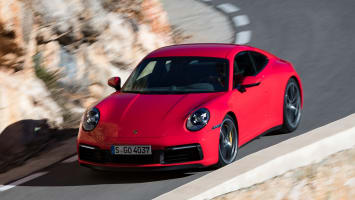 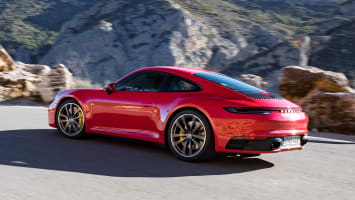 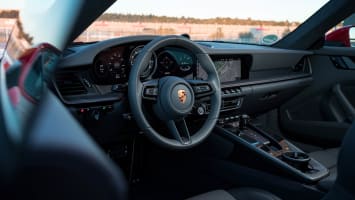 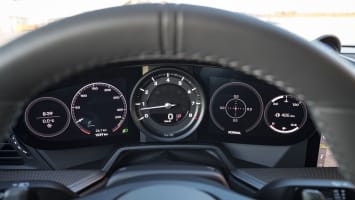 Driving the new 911 reveals strong, familiar traits undiminished by departures from tradition like the stubby Panamera-like shifter stalk. But the new car's wider stance and smaller front wheels lend it a surefootedness that belies its relatively sedate ride. Even in Sport Plus mode, the dampers feel more pliable than their former iteration, aided by new Porsche-calibrated controllers which take into account factors like road condition, vehicle weight, and suspension kinematics.

On one particularly tight and windy stretch in the hills outside of Valencia, the 992 diced and juked without delivering a jarring ride. Turn-in is responsive enough to inspire quick entry speeds, and the body feels flat and composed in the corners thanks in part to Porsche's optional dynamic chassis control feature, which uses active anti-roll bars. 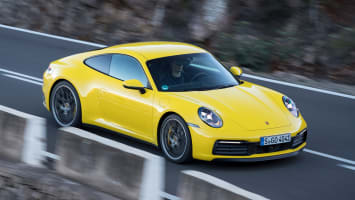 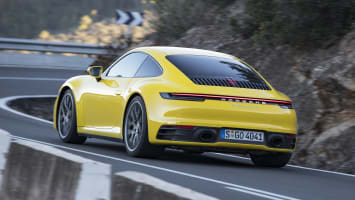 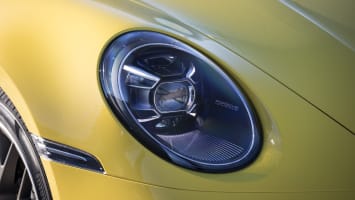 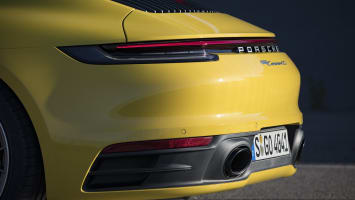 Power is also plentiful thanks to larger turbochargers, asymmetrical valve lift, and new piezo-controlled injectors for better combustion. The 3.0-liter flat-six's output climbs from 420 to 443 horsepower and torque increases by 22 pound-feet, to 390. In combination with shorter gearing on cogs one through seven, the new 911 feels brisk and urgent (but not quite brutal), accelerating to 60 mph in as little as 3.2 seconds in the Carrera 4S using launch control. The new, taller eighth gear enables mellower highway cruising as well, translating to a sedate 2,000 rpm when speeding along at 90 mph in top gear. Porsche has made the already quick PDK even more so. It's more slick and seamlessly responsive than ever, while providing greater efficiency.

Chasing a 911 GT3 RS in a Carrera 4S at the 2.5 mile-long Circuit Ricardo Tormo reveals more of the solid underpinnings that make the new 911 such a pleasure on the road. With a quicker steering ratio and a rear-wheel steering system that aids turn-in at lower speeds, the all-wheel 911 drive corners with impressive front end grip, and rotates easily enough to encourage earlier throttle application at the apex. While the standard equipment Pirelli P-Zeros deliver enough grip for most spirited road driving, the 220 treadwear rated rubber is milder than the Michelins expected later in the product cycle. Turn-in is relatively linear and straightforward, but corner exit is where the 4S's composure shines: even with an abrupt stab of the throttle all four paws claw into the circuit's surface and shoot the car forward — no tail-sliding drama here.

While the 911's new chassis deserves much of the credit, so do the suite of electronic aids like pedestrian detection and a new wet mode. By using acoustical sensors in the front wheel well, the system recognizes water spray above 31 mph and past 1,000 feet of distance traveled, the system triggers a suggestion to switch to wet mode. The setup alters a myriad parameters including traction control, stability control, and torque vectoring. Wet mode worked seamlessly over several laps through a dampened parcour course, feathering the vehicle's intervention to set the 911 on a gentle arc through the hairpins. The system doesn't feel as impressive until you try Sport Plus, which produces a sharp snap of the tail before the system "catches" you, adding credence to the unofficial nickname acronym of PSM: Please Save Me. 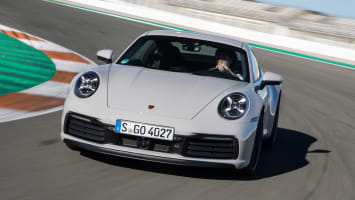 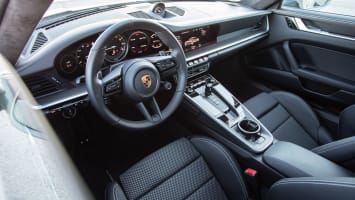 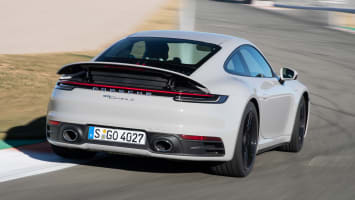 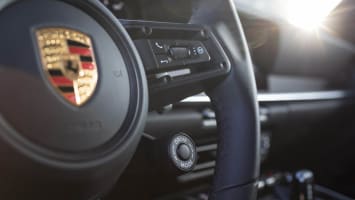 While the new 911 essentially reassures us that Porsche hasn't diluted the car's essential character, the toughest critics will fault the 992's 121-pound increase in mass despite a body made almost entirely of aluminum. But the weight gain comes with some strong qualifiers that help dull the pain a bit.

For starters, while some of the mass is related to its camera-based assistance system or the standard-for-now PDK, the rest comes from accommodations for a future electrified 911 variant. There's an electric brake booster, for example, and a heavier and larger bell housing to make room for an electric motor down the road. Thus, some of this mass is to aid drivetrain flexibility in the future, but it comes at the cost of ultimate weight savings in the present. Consider it a crucial part of building a viable future for the unmistakable sports car that built the Porsche brand, even though a spokesperson told me that a hybrid 911 is not necessarily a guaranteed part of the product plan.

For now, the new 911 fulfills its mission as a highly competent and comfortable sports car that exhibits remarkable road manners, an outstanding chassis, and enough power to hang with more exotic offerings from certain unnamed Italian manufacturers. Progress may be a slippery slope when it comes to icons, but it's safe to say that Porsche is future-proofing the 911 in the most level-headed way possible: through steady, measured improvement, and a willingness to embrace whatever it takes to stay relevant.