Autoblog recently traveled to Australia to drive the 2019 Ford Ranger Raptor. While we were there, Senior Producer Christopher McGraw and Associate Producer Alexander Malburg left the truck behind one morning to climb Australia's tallest mountain. This story is part of a larger series of stories from Australia.

Before this trip to check out the not-for-America 2019 Ford Ranger Raptor, I had never once stood on top of a country, let alone a continent. It is a surreal feeling, being able to look in every direction as far as you can, and having to look downwards at the peaks surrounding you. And 50 years ago, we wouldn't have needed to get out of the driver's seat to experience this.

This area of the country is home to the tallest mountain range in Australia, the not-so creatively named Snowy Mountains, the tallest of being Mt. Kosciuszko which shares its name with the National Park that surrounds it. The mountain was first summited in 1840 by Polish explorer Pawel Edmund Strzelecki, who named it for General Tadeusz Kosciuszko. Until 1977, you could drive to within feet of the peak of the tallest mountain on the continent.

Today, that road no longer allows motor vehicles because of the negative environmental impact, so we left the Ranger Raptor behind. None of that mattered to me on this morning in late October, 50 feet up in the air on a chairlift, starting my journey to the summit of the tallest mountain in Australia in order to experience the view that motorists used to be able to experience.

There are things that are worth doing after you get out of your car.

Mt. Kosciuszko is near the rural town of Crackenback, just outside the Kosciuszko National Park. From where I live in Golden, Colorado, Australia is about as far away as you can get before you're heading back. And yet, what drew me to Crackenback and the larger ski town next to it, Thredbo, was, in part, the familiarity of it. It's not too different than the ski towns that stud the Rockies. 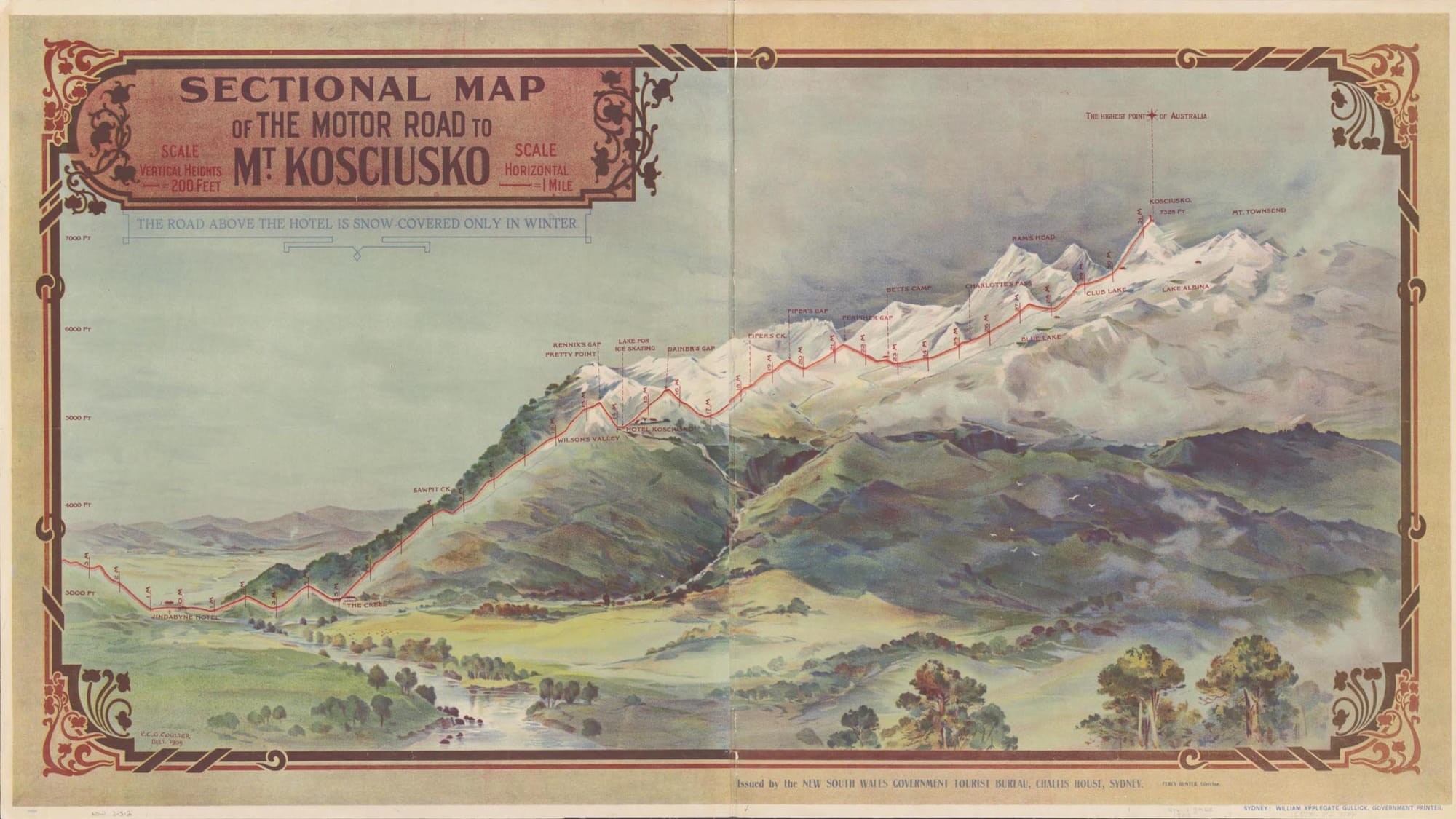 Sitting in the middle of Kosciuszko National Park, throughout most of the winter Thredbo is a popular ski town, filled with tourists who come to the region from all over the country to experience the skiing, snowboarding and backcountry snowshoeing, not to mention the parties. Late spring is a different story. With the exception of the resort staff, we were hard pressed to find another soul wandering around what looked more like a post-apocalyptic film set than a mountain town.

The clouds were low, covering the tops of the ski hills as we walked into the information center. The thermometer on the wall read three degrees Celsius. Looking down at our hiking boots, the friendly Aussie behind the counter remarked, "I'll tell you what we're supposed to say and what I actually think. We're supposed to say you need snowshoes to get to the top. But you'll be fine in those. Just try to stay on the trail."

While it is the tallest mountain in Australia, an Everest Kosciuszko is not. Sitting only 7,310 feet above sea level, the summit is barely 1,800 feet higher than the city of Denver, and 13,000 feet shorter than the tallest mountain in the United States, Denali. The climb to the summit is really more of a hike, with a year-round chairlift aptly named the Kosciuszko Express doing most of the work.

The ski lift to the trailhead supposedly "operates year-round" according to the information we found online. Year-round in this instance meant most-of-the-time-but-not-today, meaning that we'd be taking the backup lift, adding a few hundred vertical feet to our trek. While Mt. Kosciuszko is not an intimidating hike by any means — the entire route features an elevated metal pathway and there's a hilltop restaurant at the trailhead — the view on the chairlift on the way to the top is absolutely breathtaking. When I pictured Australia before I thought of a flat, red clay desert, not alpine views similar to those I have back home. Hopping off the lift, we were in the clouds, but 24 minutes and one wrong turn later, we broke through. As you can see in the photos above, the landscape is nothing like the outback. Within two hours we were at the end of the path, staring at a short uphill climb to the summit through what was left of the Australian winter's snow.

The summit was quiet, except for the wind. There was one other person sitting at the top when we arrived, but he had since glissaded down the side and was headed back. The only other living creatures were some birds who were trying to steal what little food we had left in our packs. We took a few photos, sent a couple of videos to our loved ones (we still had cell reception), and began the hike back to the truck.

We were halfway down the chairlift when I saw a Lightning Blue speck in the parking lot. I began to think of how neat it would've been to drive the Ranger Raptor all the way to the top, its tires fighting against the last of the Australian winter's ice and snow, but taking a paved road to the summit of a mountain is hardly as exciting. Being at the highest point on any continent is exhilarating, but being able to hike it is no doubt a better overall experience — and I think the beer at the bottom tasted better for it, too.

If you're not planning on traveling to Australia any time soon to trek up Kosciuszko, or would prefer summiting mountains the boring way (from the driver's seat of your car), Colorado is home to two of the highest roads in North America. Most people know of the second, Pikes Peak, which at 14,110 feet sits nearly twice as high as Kosciuszko, but a little more than an hour's drive from Denver is Mt. Evans, which sits at 14,264 feet and is equally as breathtaking. Just make sure to check and see if the road is open before getting there.

You can read our review of the 2019 Ford Ranger Raptor here, or watch the video below.