How does a fancy 10-speed affect the third-place pony car?

10
2 Reviews
View All Specs
2 Reviews
MALIBU, Calif. — The updated 2019 Camaro SS might be the third-best-selling muscle car, behind the Dodge Challenger and the Ford Mustang, but it makes a mighty bid for relevance. That's due in large part to the enthusiasm of guys like Mr. Camaro himself — Chevrolet chief engineer Al Oppenheiser, sitting with me at breakfast ahead of my first drive of the new 2019 Chevy Camaro SS 10-speed.

"Here are a few pics of my garage," he gushed, sharing cellphone snaps of his multi-generational stash of Camaros, which include the crown jewel, a lovingly restored and gorgeous 1968 SS convertible. So he knows muscle. And the 2019 SS ($37,000) is a large-displacement monster stalking the land that turbochargers forgot. We're talking 6.2 liters of growly, burbly, naturally aspirated V8 power producing a stout 455 hp and 455 lb-ft. And yes, you can pair the mighty mill with a good old-fashioned manual transmission.

The facelifted iteration of the sixth-generation Camaro that debuted in 2016 adds an available 10-speed automatic gearbox, revised front and rear ends with new LED taillamps, updated 20-inch wheels and a new third-gen infotainment system. But before you go bashing the two-pedal setup, spoiler alert: This is no uninspired slushbox. It's actually really good. The multi-clutch 10-speed was co-developed initially with Ford (go figure), and claims shifts in as little as 150 milliseconds — faster than Porsche's PDK dual-clutch. Interestingly, Oppenheiser says he was so impressed with Porsche's predictive tachometer, which blips down to meet the projected rpm in the next gear, that the feature was incorporated into Camaro. 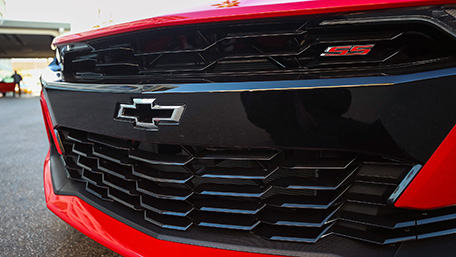 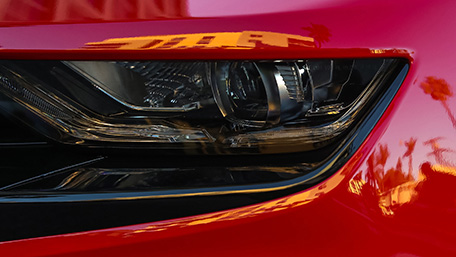 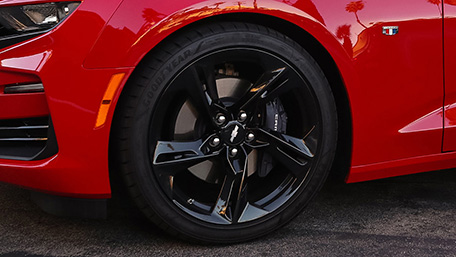 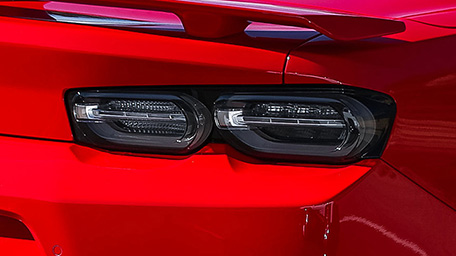 For what it's worth, the Camaro's new mask-like face has gleaned more than its share of controversy. However, haters should note that the so-called Flowtie — introduced on the 2014 Camaro Z/28 — serves a functional purpose by channeling up to 3 cubic meters of air per minute through the front end. Nifty.

The Camaro SS's cabin is immersive — and not necessarily in a good way. Shut those big heavy doors, and the high sills makes you feel like you're sitting deep within the vehicle, with large haunches and C-pillars obscuring quite a bit of rear visibility. New for '19 is an available digital rearview mirror that goes a long way towards remedying those notorious blindspots. Even in the convertible version, which has a relatively small rear window opening with the top up, flipping the mirrors to digital mode provides a much-needed boost in confidence and situational awareness. The cabin, understated as it is in color and trim, is decently outfitted save some hard plastic on the transmission tunnel. Real aluminum trim rims the door and instrument panel.

But more crucial to muscle car fanatics is performance and personality, and the SS has surprisingly capable dynamics for a big bore, front-engine car. There's a lovely bass note from the V8, though four customizable settings can vary the sound output, hushing it considerably in so-called Stealth mode. The engine delivers a ton of torquey gravitas, while the 10-speed auto dispatches super smooth shifts at what feels like just the right time thanks to algorithms specific to Sport and Track modes. 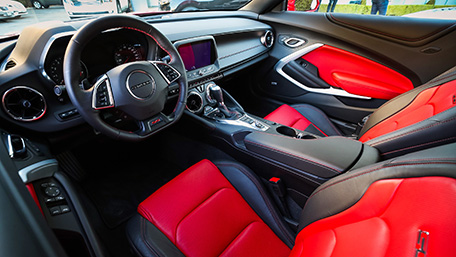 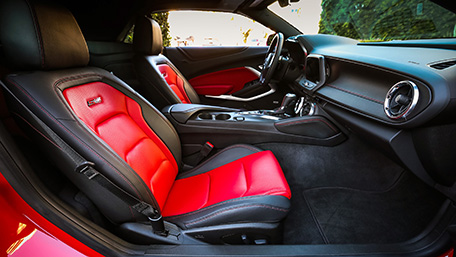 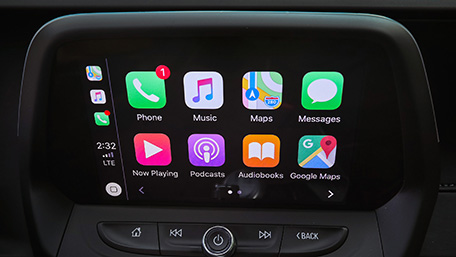 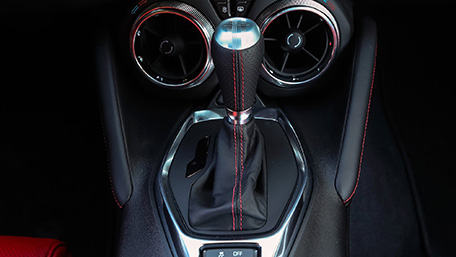 But why 10 gears? With the lower gears configured for tighter ratios, the transmission enables quicker acceleration and optimal usage of the powerband, which peaks in horsepower and torque at 6,000 rpm and 4,400 rpm, respectively.

In Sport and Track modes, the steering-wheel paddles are tuned for performance; hold the down paddle for 1.25 seconds and the gearbox leapfrogs down the cogs, even shifting from 10th to 3rd in order to maximize the engine's sweet spot. The so-called liftfoot gear hold function holds the gear during throttle liftoff, and the transmission's programming feels intuitive and user friendly during high-speed driving, offering smooth, extra quick shifts, especially as the analog tach needle approaches the 6,500 rpm redline. Lift off between 3,000 and 5,000 rpm in Sport or Track mode, and a delightful cacophony of pops and burbles fills the cabin. Launch control enables 0 to 60 mph sprints in a claimed 4 seconds flat, while the manual requires 0.3 more seconds of patience. Chevrolet doesn't have official fuel economy figures yet, but the motor spins at only 1,300 rpm at 60 mph, and its cylinder deactivation system suggests the usual gas-guzzling V8 assumptions do not apply.

Perhaps the Camaro SS's biggest surprise came on the twisty roads that snake from Pacific Coast Highway through Malibu's rolling hills. My first go came on a media drive organized by Chevrolet, where 50 or so miles of highway and canyon driving were devoured with ease. My Magnetic Ride Control-equipped tester glided smoothly over bumps and ridges, and body control felt exceptional at elevated speeds; the option is well worth the $1,695 asking price. 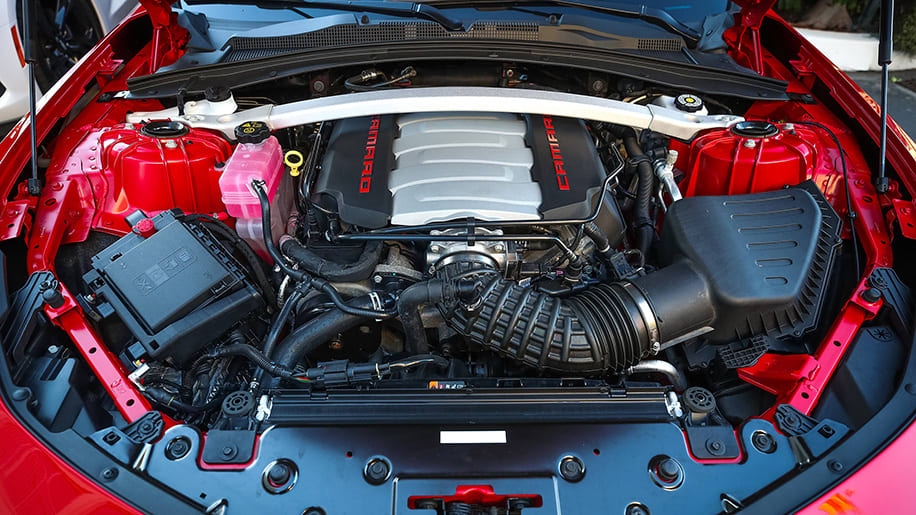 However, I wasn't able to fully grasp the SS's performance envelope until I took a Camaro home and revisited the canyon roads later that week, tackling the twisties with more stick. Piloting the Camaro through winding stretches of Latigo Canyon Road between PCH and Kanan Dume Road at speed requires a crucial leap of faith. Despite the perceived bulk of the Camaro and a 110.7 inch wheelbase, there's tremendous grip at turn-in and the chassis is communicative enough to encourage remarkable entry speeds. Four-piston Brembo brakes offer reasonably good feel and strong stopping power. Even more impressive: My week-long loaner was a convertible, impressively responsive for a car with no fixed roof to stiffen it up.

After a week and several hundred miles, my 10-speed automatic Camaro SS experience left me with minor criticisms and quite a bit of satisfaction. Gripes? Well, the small plastic paddles are steering-wheel mounted, and the somewhat slow-ish steering ratio means that manually actuated shifts at lower speeds can happen while arms are crossed over. Despite the aid of the electronic mirror, rearward visibility still lacks. And while interior quality has improved by leaps and bounds over previous models, my well-equipped $54,170 loaner seemed more focused on its road manners and sporting character than cabin material quality. On the other hand, the new infotainment system's 8-inch touchscreen delivers an easy-to-use, lag-free interface, while thoughtful details include the large HVAC vents with knurled temperature control dials around the openings. 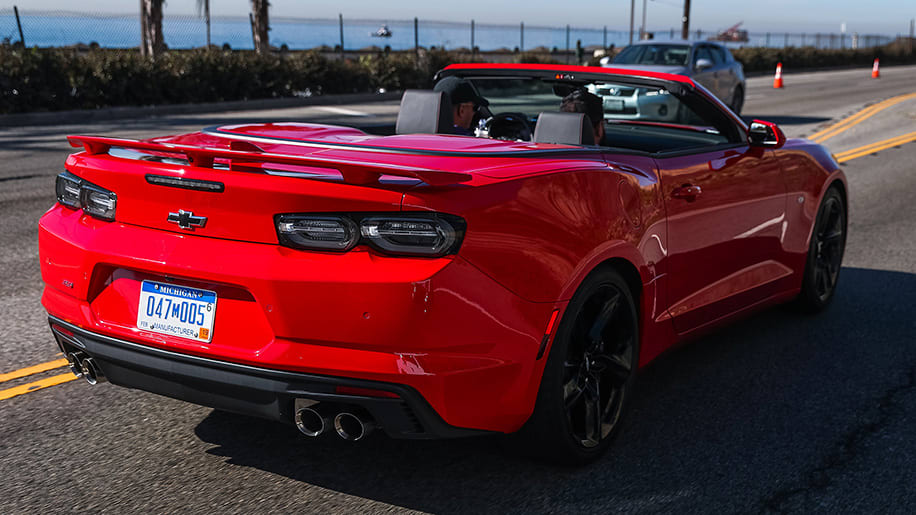 All in all, the Camaro SS deserves better than a third-place sales finish behind its domestic sports car competitors. Oppenheiser says more aggressive pricing on lower-end LS and LT models undercut their Mustang counterparts by $1,000 and $3,000, respectively, which could help tighten the gap. But the introduction of the 10-speed auto into the SS model, though not for everyone, makes a strong case for owning a bona fide burbling muscle car that's flexible, comfortable, and capable enough for spirited everyday driving.

And yet, despite endless left-brain analysis that could be satisfied by a quick, smooth-shifting transmission and a powerful but efficient drivetrain, most shoppers will likely gravitate to their favorite brand based on their hearts, not their minds. I should know; the 2019 Camaro SS sold me on its performance merits and charismatic capabilities, but neither it, nor any other force of sports car nature, is likely to alter any fan's brand allegiance. Go figure: Sometimes blood is thicker than fuel. 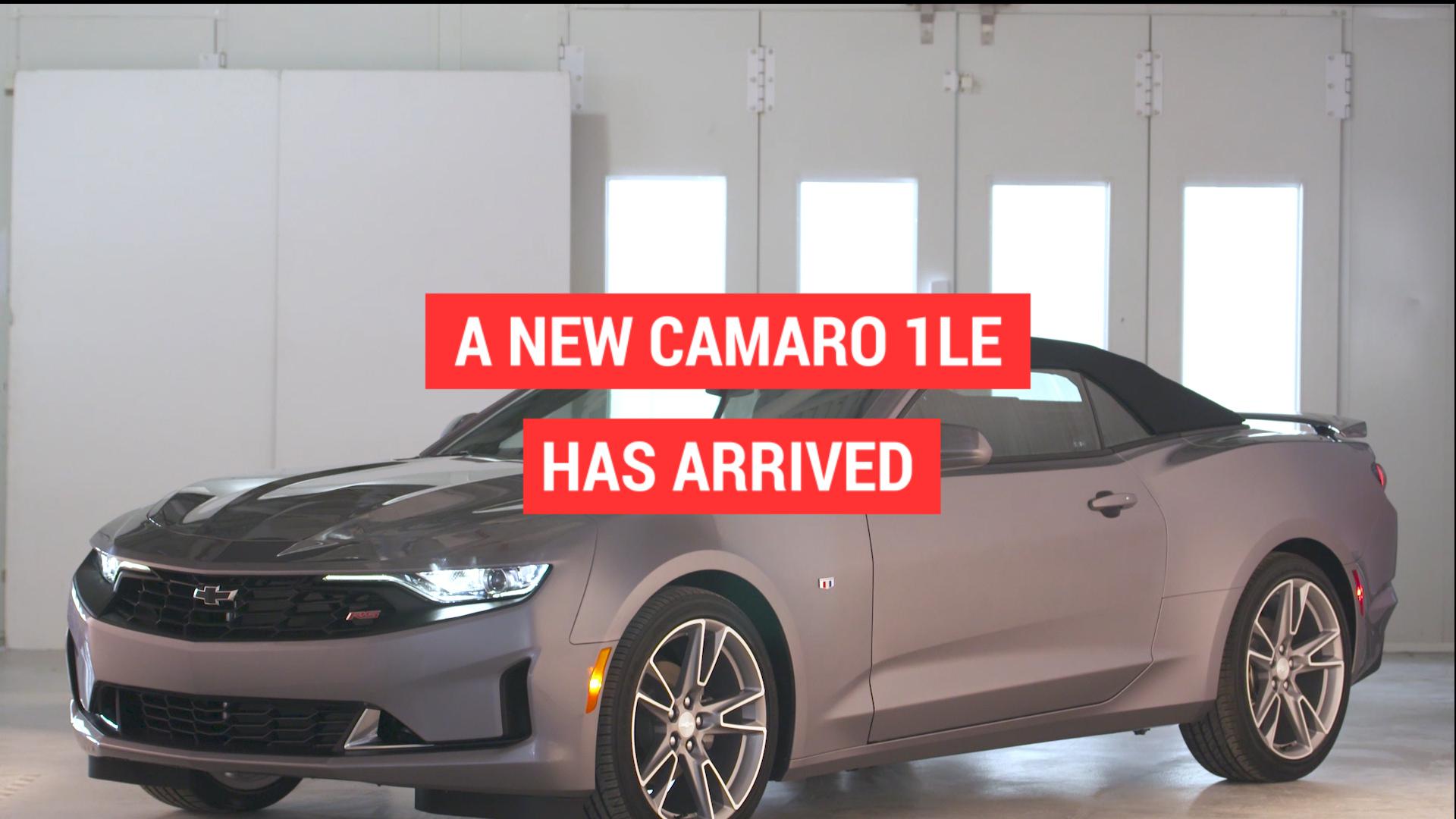 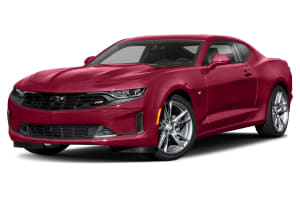