The price premium is reasonable, and there are no major compromises

There was no shortage of reasons to avoid hybrid midsize sedans in the past. They got worse fuel economy than dedicated hybrids like the Prius and Insight. Their brakes were weird and the power delivery weirder. Their trunks were severely compromised by their battery packs, which not only also added a considerable amount of weight, but did so beyond the rear axle — not exactly ideal for balanced vehicle dynamics. Their price tags were also high enough beyond their non-hybrid siblings that the payback time based on fuel savings often stretched to six years or beyond.

Basically, they made no sense. The 2018 Honda Accord Hybrid, on the other hand, makes a ton of sense and could easily be considered the best version to buy. Well, besides the one with a manual transmission. That one's definitely the best, but then I've heard a rumor people prefer automatics these days. Anyway, the hybrid. Let's go through those various ways it bucks the unfortunate trends of its hybrid midsize sedan forbearers.

In terms of fuel economy, the Accord Hybrid achieves an EPA-estimated 47 mpg in all driving scenarios, including combined. Now, true, that is lower than the 52 mpg combined you'd get in most Prius and Insight trims, plus the Camry Hybrid LE. However, that gap is considerably less than earlier hybrid sedans, and according to the EPA, only amounts to an annual fuel cost difference of $50 per year. So basically, who cares?

Especially when you consider the more refined driving experience you get with the Accord Hybrid. It's a serene rolling palace compared to the boomingly loud echo chamber that is the Prius. Its larger four-cylinder engine/generator is also notably quieter than the Insight's, which otherwise shares the Accord's hybrid powertrain setup. 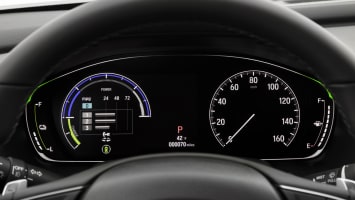 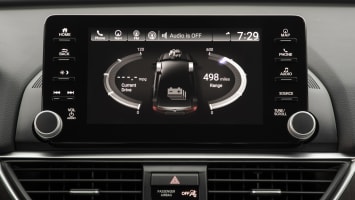 The only way to tell the Hybrid apart inside are the gauges and this special touchscreen readout.

That setup itself is also worthy of praise. Unlike Toyota's system, the Honda hybrid uses the electric motor to directly power the wheels in almost all circumstances. This provides an almost EV-like power delivery of buttery smooth, right-now torque, which is pretty much the best part about driving an electric car. When the engine does come on, it does so to provide energy to that motor, meaning you don't get that jarring change-over from electric to engine power while mostly avoiding the vibration and loud droning associated with other hybrids and their CVT-like transmissions (the Accord's engine is only directly attached to the wheels under constant low-demand situations such as highway cruising).

Essentially, I think most drivers would prefer this quieter, smoother and torquier power delivery to that of the gas-only Accords — and those are some pretty swell engines themselves. There's also none of the bizarrely wooden brake feel you'd get in hybrids of old. Everything just seems normal. 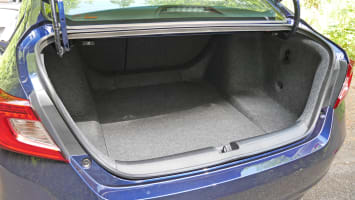 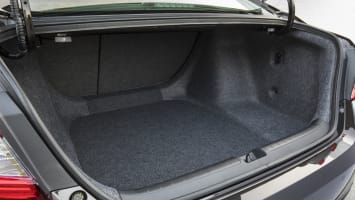 Accord 2.0T trunk left, Accord Hybrid right. They're the same!

Then there's that battery pack, which has migrated underneath the back seat. This allows the Accord Hybrid to achieve the same enormous 16.7-cubic-foot trunk that bettered its midsize sedan competitors in our recent comparison. The old Accord Hybrid, by contrast, was one of the most compromised hybrid sedans. In my opinion, trunk space was the No. 1 reason to not buy a hybrid sedan in the past. The new Accord, as well as the latest Camry Hybrid, corrects this.

Yet, this battery migration has a welcome secondary benefit. Moving all that weight low and forward of the rear axle is a benefit for handling — the Accord Hybrid might even handle better than the non-hybrid models. Toyota's engineers noted the Camry Hybrid is the most balanced of the bunch, with the car's chief engineer in particular saying definitively that it's the best-handling as a result. I wouldn't be surprised if Honda's engineers concurred, because the Accord Hybrid is indeed notably balanced and poised. At the very least, it doesn't seem to lose anything compared to the gas-only versions. I was just as engaged on a mountain road in the Accord Hybrid as I was in the 2.0-liter Accord Touring.

The ride is also considerably better, confirming my suspicion during the comparison test that the 2.0-liter Touring's 19-inch wheels ruin what is otherwise a well-damped suspension (with adaptive dampers no less). The 17's found on every Hybrid don't suffer from the same nervousness and insufferable impact harshness, and again, I didn't notice a substantial dropoff in agility. The Hybrid Touring also gets those adaptive dampers, so in terms of ride and handling balance, I'd therefore wager it could be the best of the bunch. 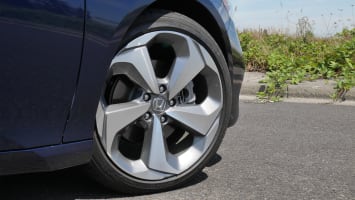 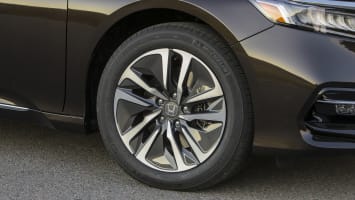 And now we get to price. Although the recent U.N. report on climate change has reiterated the importance of emitting less carbon, doing so at fiscally questionable expense will forever be a tough pill to swallow. Well, the Accord's hybrid powertrain costs only $1,530 more than the base 1.5-liter turbo four-cylinder. The 2.0-liter turbo is $2,000 extra, and unlike the Hybrid, can't be had in the base or EX trim levels. Using the EPA's annual fuel cost estimates, it would take you only 3 years and 10 months to pay back the Hybrid's premium versus the 1.5-liter Accord. For a hybrid, that's very short.

Plus, when you consider the potential side benefits you get from the Hybrid as described above, it's just that much easier to justify the added expense of going green. It also makes the Hybrid the easiest 2018 Accord to recommend ... well, besides the one with the manual. 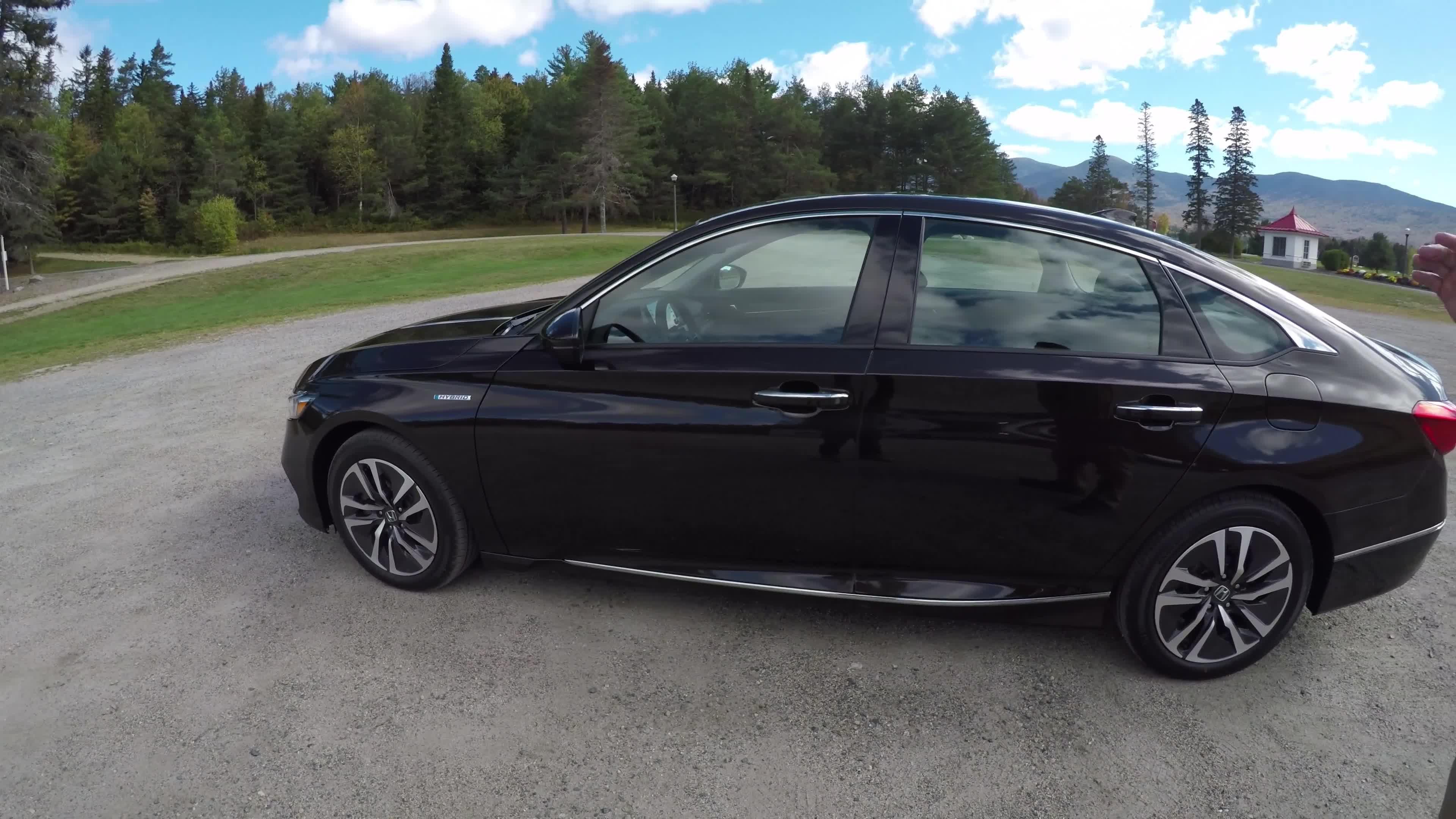