Tony Markovich
Art Basel has grown to expansive levels in the past decade. The historic global modern and contemporary art tour has integrated itself in automotive culture through various initiatives such as its partnership with BMW. But for those who are interested strictly in the relationship between automobiles and art and design, there is a different Basel: Grand Basel, a new show launched this year in Switzerland. There, alongside automobiles of timeless importance, a never-realized car design from the '50s debuted for the first time.

That car is the Linea Diamante, which roughly translates to Diamond Line. The design was originally conceptualized in 1952 by Gio Ponti and Alberto Rosselli for Carrozzeria Touring. It was intended for an Alfa Romeo 1900 chassis, yet looked nothing like any Alfa, or any other vehicle, of the time.

Grand Basel describes itself as a place where "the finest automobiles of the past, present, and future are discussed in the cultural context of art, design, architecture, and lifestyle." In that vein, the Linea Diamante is now viewed as a design far ahead of its time.

With a shape similar to that of a Saab 900, which didn't debut until the late '70s, the Linea looked nothing like the over-stylized bubbly curvaceous designs of the '50s. Hoping to oppose the less practical car bodies that created large cavernous interiors, Ponti set out to craft a suit that isolated passengers from the outside less. The result is a boxy vehicle with a wide-open cabin. The panels are flat, the nose is low, the greenhouse is upright and tall, and the rear angles straight down like a hatchback. Though it was an eyesore to many at the time, the design created better visibility, an airy-feeling cabin, and maintained practical space. The rear seats are even adjustable, an unheard-of feature for the period.

It is also on this car that Ponti formed a relationship with Pirelli (he later designed the Pirelli Tower in Milan). Furthering the futuristic premise of the vehicle, the Linea had a wrap-around rubber bumper with spring-mounted pieces at the front and rear for extra safety in the event of an accident. As a nod to this collaboration, Pirelli provided the tires for the modern replica. 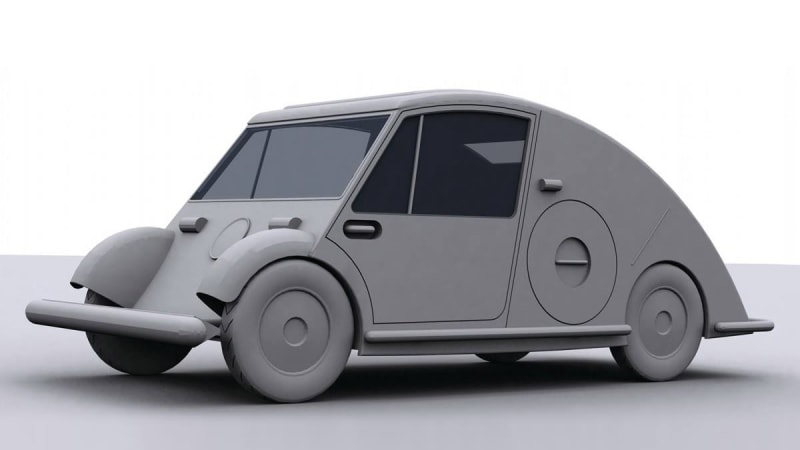 When Carrozzeria Touring turned the wild concept down, Ponti turned to Fiat, but the design was thought to be too outrageous. More than 60 years later, Fiat's owner, Fiat Chrysler Automobiles ( FCA), is trying to make up for it. Centro Stile FCA, Grand Basel, Editoriale Domus (an architecture and design publication co-founded by Ponti in 1928), and Pirelli worked together to bring the design to life in the form of a three-dimensional 1:1 scale model, spearheaded by Head of FCA Heritage Roberto Giolito. It made its first public appearance this week next to an Alfa Romeo 1900 dubbed "The Time Machine" from the Alfa Romeo Museum in Arese, Italy.

These cars are just two of dozens on display at Grand Basel. Another of the more unique vehicles includes this oddball Le Corbusier Voiture Minimum (shown above). With his cousin Pierre Jeannette, Swiss architect Le Corbusier submitted this unique design in 1936 as part of a national competition that sought out a solution for cheap and practical small vehicles. Like the Linea, it never made it to series production.