Here's what you need to know before buying a Grand Cherokee The Jeep Grand Cherokee is several SUVs rolled into one. When equipped with the standard 3.6-liter V6, the Grand Cherokee is a refined and well-mannered sport-utility that delivers a comfortable ride, a handsome cabin, along with Jeep's legendary off-road prowess.

At other end of the spectrum is the Trackhawk, a Grand Cherokee with the heart of a 707-horsepower muscle car. Powered by the same supercharged V8 found in the ferociously quick Dodge Challenger Hellcat, the Grand Cherokee Trackhawk is one of the fastest and wildest SUVs of all time.

Between these extremes there are plenty of other options, including two somewhat less powerful (but still potent) choices of V8. An available air suspension not only helps to make the ride smoother, it can significantly raise the ride height for any rock-crawling moments you encounter.

Here you'll find all the information needed to make an educated buying decision if you're considering a 2018 Jeep Grand Cherokee, including safety and reliability ratings, engine specs, horsepower, fuel economy ratings and pricing. 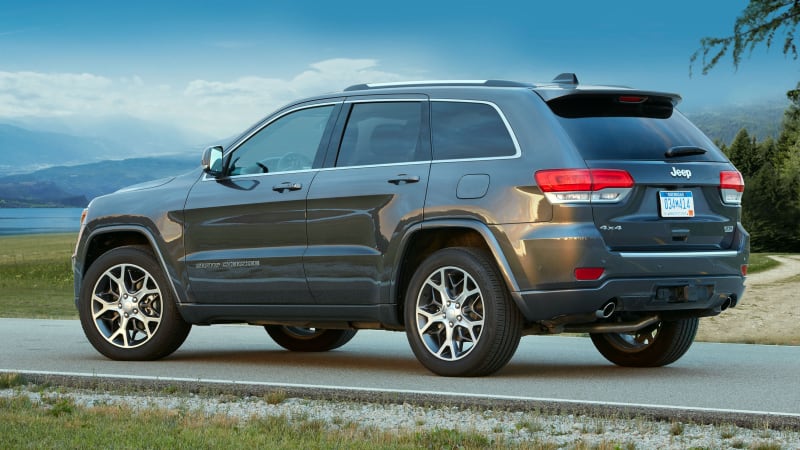 Is the 2018 Jeep Grand Cherokee Safe?


The Jeep Grand Cherokee scores four out of a possible five stars in the National Highway Traffic Safety Administration's overall crash-test rating system. The Grand Cherokee was tested in both rear- and all-wheel drive format.

The Insurance Institute for Highway Safety, which provides ratings for new vehicles based on its own comprehensive crash tests, found room for improvement when it comes to the Grand Cherokee's performance in its crash test regime. While it earned top marks in some categories – such as side impact crash tests, and front crash avoidance (when fitted with optional safety equipment) – the Grand Cherokee registered a "Marginal" and "Poor" rating for its performance in the Small Overlap Front test. This simulates a vehicle hitting a static object, such as a utility pole, with only a fraction of its front end.
Ratings could differ for Grand Cherokees from other model years, so be sure to visit the NHTSA and IIHS websites to review ratings on the specific vehicle you're researching.

At the time of this writing, the 2018 Grand Cherokee is subject to three ongoing recalls, according to the NHTSA. The first involves a fault where the cruise control system cannot be cancelled. This could increase the risk of a crash if cruise control fails to allow the driver to switch the system off. This recall affects all 2014-2018 model year Grand Cherokees, along with more than 4 million vehicles across the entire Jeep, Dodge and Chrysler lineups. 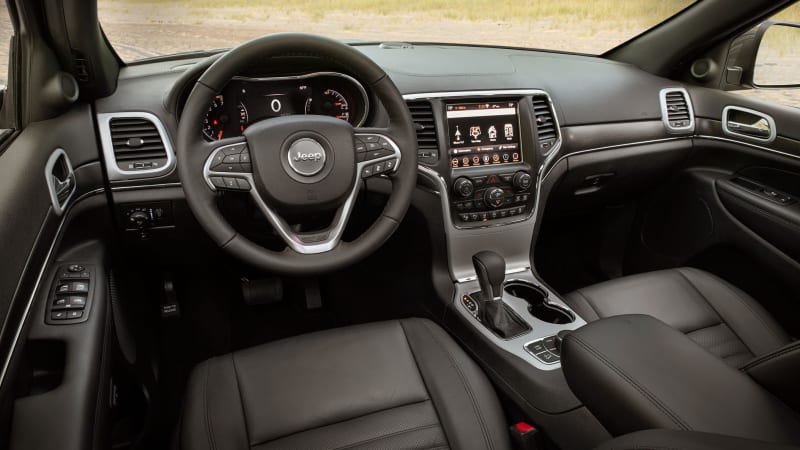 Is the Jeep Grand Cherokee reliable?


J.D. Power gave the 2018 Jeep Grand Cherokee three out of five possible stars for Overall Quality. This dipped to only two out of five stars when it came categories such as Predicted Reliability, Overall Quality Mechanical, and Body and Interior Quality. These scores put the Grand Cherokee towards the middle to bottom-end of the quality rating system. 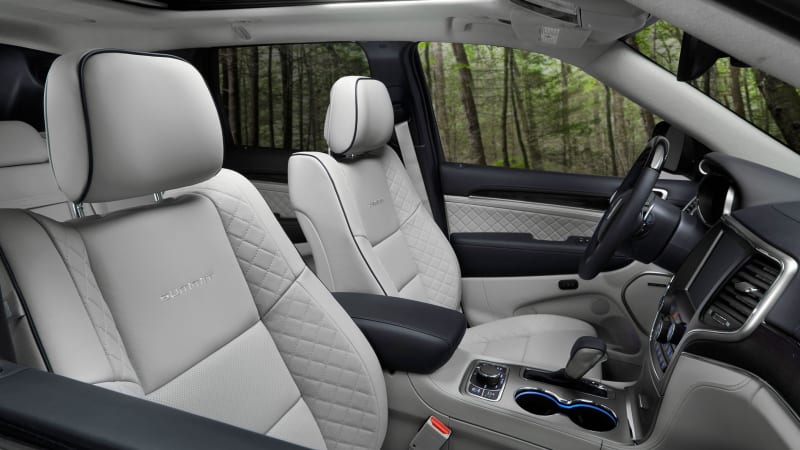 How much interior and cargo room does the Grand Cherokee have? 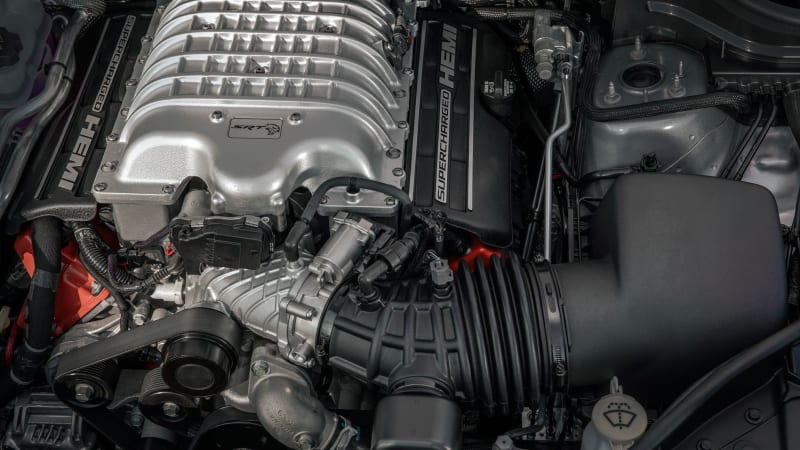 What are the Grand Cherokee engines and specs?


The base Grand Cherokee comes powered by a 3.6-liter V6 that delivers 295 horsepower and 290 pound-feet of torque. Next up the engine range is a 5.7-liter V8, which produces a stout 360 horsepower and 390 pound-feet of torque. Towing capacity with either of these two engines is rated between 6,200-7,200 lbs.
Moving higher up the range is the Grand Cherokee SRT, powered by a 6.4-liter V8 that pushes out 475 horsepower and 470 pound-feet of torque. This would be more than enough firepower for any other SUV, but Jeep turns things up to extremes with the Trackhawk model. Equipped with a raucous 707-horsepower supercharged 6.2-liter V8, the same engine found in the Dodge Challenger Hellcat muscle car, the Trackhawk delivers the raw speed and driving dynamics of a muscle car. 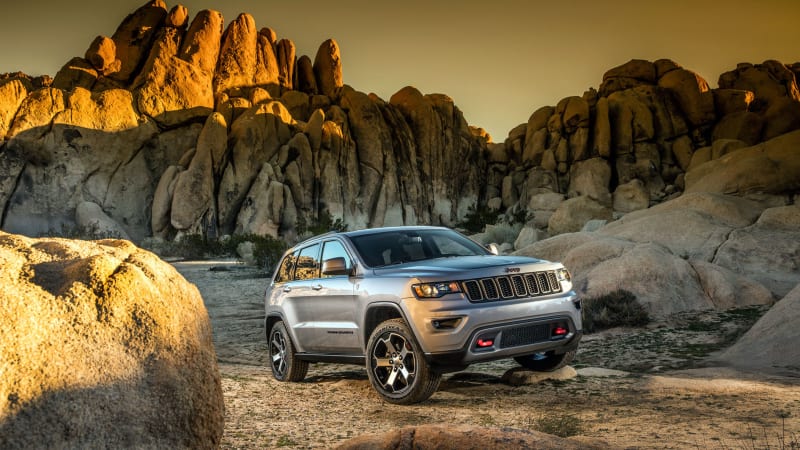 What fuel economy does the Grand Cherokee get?


Fuel economy varies widely, depending on which engine you choose. The entry-level V6 in rear-wheel drive format returns solid economy figures of 19 miles per gallon in the city and 26 mpg on the highway. Adding all-wheel drive lowers each figure by exactly 1 mpg.

The 5.7-liter V8 engine sees overall fuel economy dip to 14 mpg city/22 mpg highway. This drops even further, to 13 mpg city/19 mpg highway, with the Grand Cherokee SRT. As you can imagine, the Trackhawk is the thirstiest of all, posting an EPA-estimated 11 mpg city/17 mpg highway. 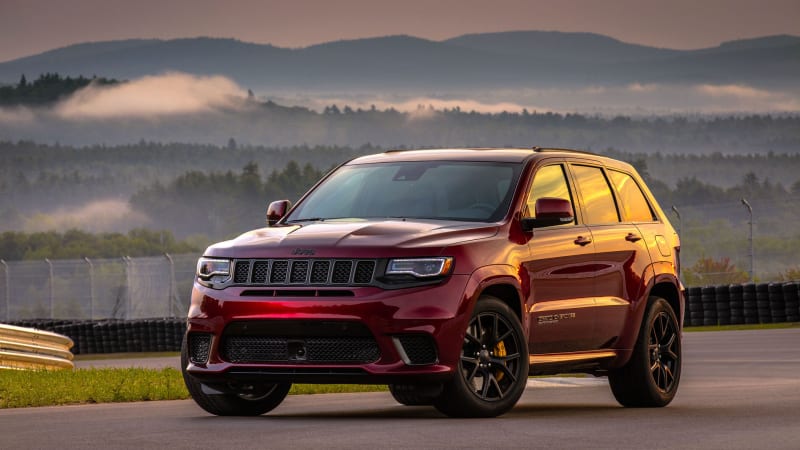 Is there a hybrid Grand Cherokee?


There is no hybrid version of the Grand Cherokee.

Does the Grand Cherokee have AWD?


The option of all-wheel drive is available across the Grand Cherokee range. Higher performance models, like the SRT and Trackhawk, are fitted with all-wheel drive as standard equipment.

What is the MSRP of the Grand Cherokee?


The 2018 Grand Cherokee Laredo has a starting price of $30,895. At the top of the Grand Cherokee lineup are high-horsepower models, like the SRT, which starts at $67,695. Then there's the top dog Trackhawk, which carries a substantial starting price of $86,200 to go along with its supercharged Hemi engine. There is a wide range of trim levels, however, and a Grand Cherokee in mid-range Limited trim with all-wheel drive and 3.6-liter V6 starts around $40,000.

Use Autoblog's Smart Car Buying program powered by TrueCar to search out competitive local pricing and savings on the 2018 Jeep Grand Cherokee. 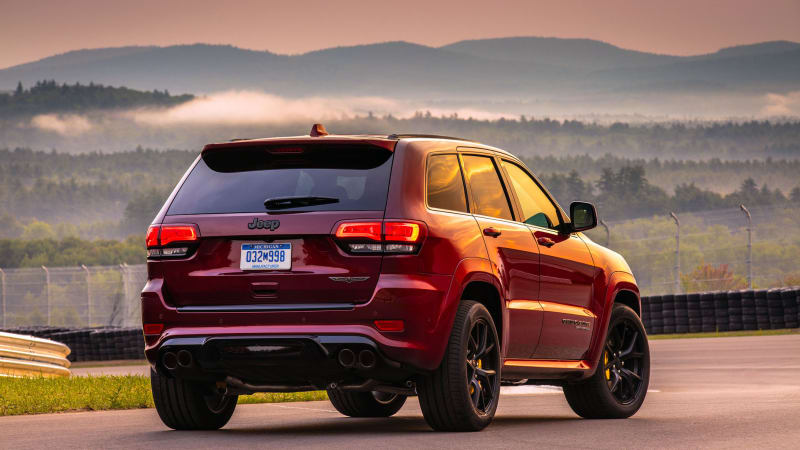 Can I read the latest review of the Grand Cherokee?


Autoblog recently got behind the wheel of the range-topping Trackhawk, to see if this 707-horsepower SUV lived up to the hype. After all, it's not every day that an automaker shoehorns one of the world's most powerful engines into a family-friendly Jeep.

As you'd expect, the Trackhawk is hellishly fast. Punch the gas pedal and the sprint from 0 to 60 mph takes only 3.5 seconds. It also has a top speed of 180 mph, but what truly surprised us is how well-rounded this super Jeep proved to be.

Despite being an inch lower than the standard Grand Cherokee and riding on large 20-inch alloy wheels, the Trackhawk's ride is firm but also remarkably stable, with none of the body roll you expect in a mega-horsepower SUV.

Our Consumer Editor, Jeremy Korzeniewski, noted how easy it is to exploit the full potential of the Trackhawk. "Put the hammer down, summon the nearly demonic power of supercharged combustion, and all hell breaks loose. But the tires don't. With launch control engaged and with the programmable engine speed properly chosen, the all-wheel-drive Trackhawk rockets to 60 miles per hour in just 3.5 seconds, over and over and over again."

Crazier than the performance is the fact that the Trackhawk isn't only about high-speed thrills. While Jeep removed some of the off-road hardware (like a low-speed transfer case), the Trackhawk can still tow up to 7,200 lbs.

To get a sense of how the Grand Cherokee's closest competitors stack up, use our Compare Cars tool.