Smart security features have given me peace of mind

Written by Nick Summers for Engadget.

Five years ago I lost my bike.

A few months prior, I had moved into a half-finished block of flats in southeast London. The apartment was complete, but construction workers were still beavering away at the stairwell. Progress was slow, though, and I was keen to commute on two wheels every morning. So I started cycling to work and, at night, chaining my beloved mountain bike to the banister at the bottom of our apartment block, long after the construction team had gone home.

Until, one morning, I woke up and discovered that it had vanished. The stairwell, coated in white paint, had a black scorch mark where my lock used to reside. I can only presume that construction workers returned in the night and took a blowtorch to the chain.

I haven't owned a bike since.

There are, of course, a few obvious solutions to this bike-thieving problem. I could buy a rust bucket, which would be unattractive to thieves and represent a minimal loss if someone decided to pinch it anyway. I could buy a bevy of sophisticated bike locks, or accept that I can't leave a bike of moderate value in plain sight. I either lock it somewhere super-secure (like my office) or ride routes that always start and finish at the safety of my apartment door.

None of these really appeal to me. I want to ride my bike to the supermarket, or the nearest café, and not have to spend 10 minutes fussing about with a dungeon's worth of chains and U-locks. 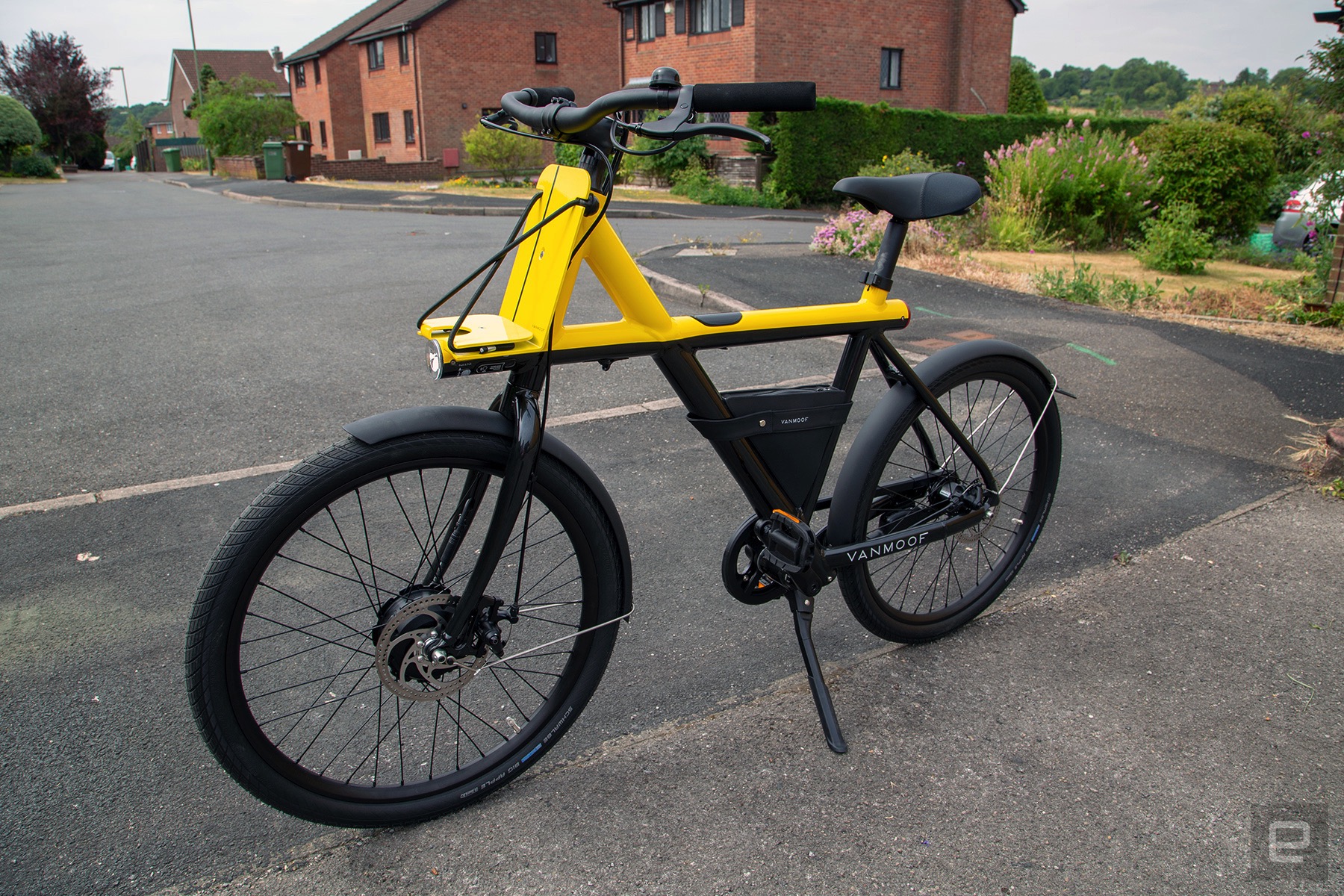 I've been riding one of its pedal-assisted bikes, the Electrified X, for a week in the south of England. The electric motor has been a wonderful aid for my noodle-thin legs in downtown Portsmouth and the hilly backcountry of the South Downs Way. The real game-changer, though, has been the smart locking system and security features that come baked into every VanMoof bike. While not ironclad (barring a personal security guard, is anything?), it's helped restore my confidence in city-centric cycling and, in the process, allowed me to embrace a healthier, greener lifestyle.

It all starts with location tracking. The GSM-integrated frame means you can pinpoint the bike's position should someone decide to pinch it. You can then track it down yourself or, if you're signed up to VanMoof's Peace of Mind service, get someone else to do the legwork. If VanMoof's team can't retrieve your bike within two weeks, they'll replace it with one that's in similar or better condition. A subscription isn't cheap, though -- it currently costs $100 per year, or $240 for three. If I owned the bike, I would probably forgo this service and do any theoretical bike chasing myself.

And then there's the chain lock, which lives in a discreet pouch in the center of the frame. The VanMoof has a circular hole at the front of the bike, just below the basket holder, called an "e-lock" port. You simply wrap the chain around a post, or the bike frame, and then pop the end inside the port. There are no keys or pin codes to remember -- you unlock the bike through the VanMoof app or by tapping a touchscreen panel on the top of the bike. (This feature works when your smartphone and bike come into Bluetooth range.) 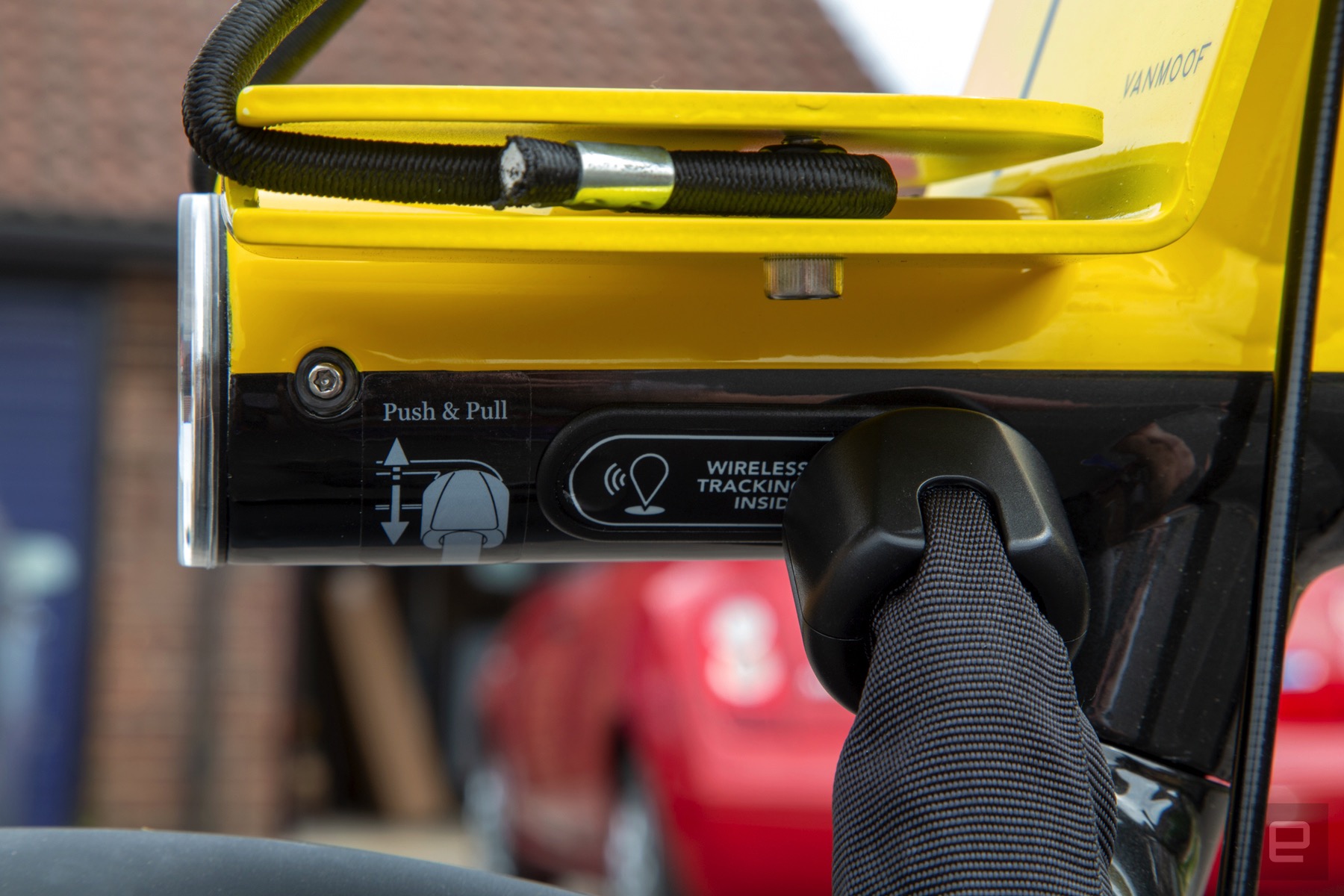 If someone tries to tamper with your VanMoof while the bike is locked, a built-in "G-sensor" will trigger, scaring them off like a car alarm. You'll also get a notification through the app, presumably so you can catch the crook before it's too late.

Together, these features put me at ease.

I can ride to a coffee shop now and park my bike wherever is most convenient. That can be in front of the store, where it's clearly visible, or around the corner if there's a bike stand or a lock-friendly pole. Before, I had to sit at a table where I could watch my ride like a hawk. Now I can take out a laptop or a book and focus just like I would at home. If I'm meeting up with a friend, I can relax and hold a conversation without excusing myself and checking on the bike every five minutes.

The same holds true if I'm grocery shopping, sending a parcel or grabbing a haircut. It's a small quality-of-life improvement, but one that makes cycling feel like a viable form of transportation again. In the past, I've usually walked or hopped on the bus, because it was less effort. With the VanMoof, pedal power becomes the fastest and least stressful way to travel. Of course, some trips are long enough that they require a car or public transport -- but for anything under 10 miles, I always choose to cycle now. 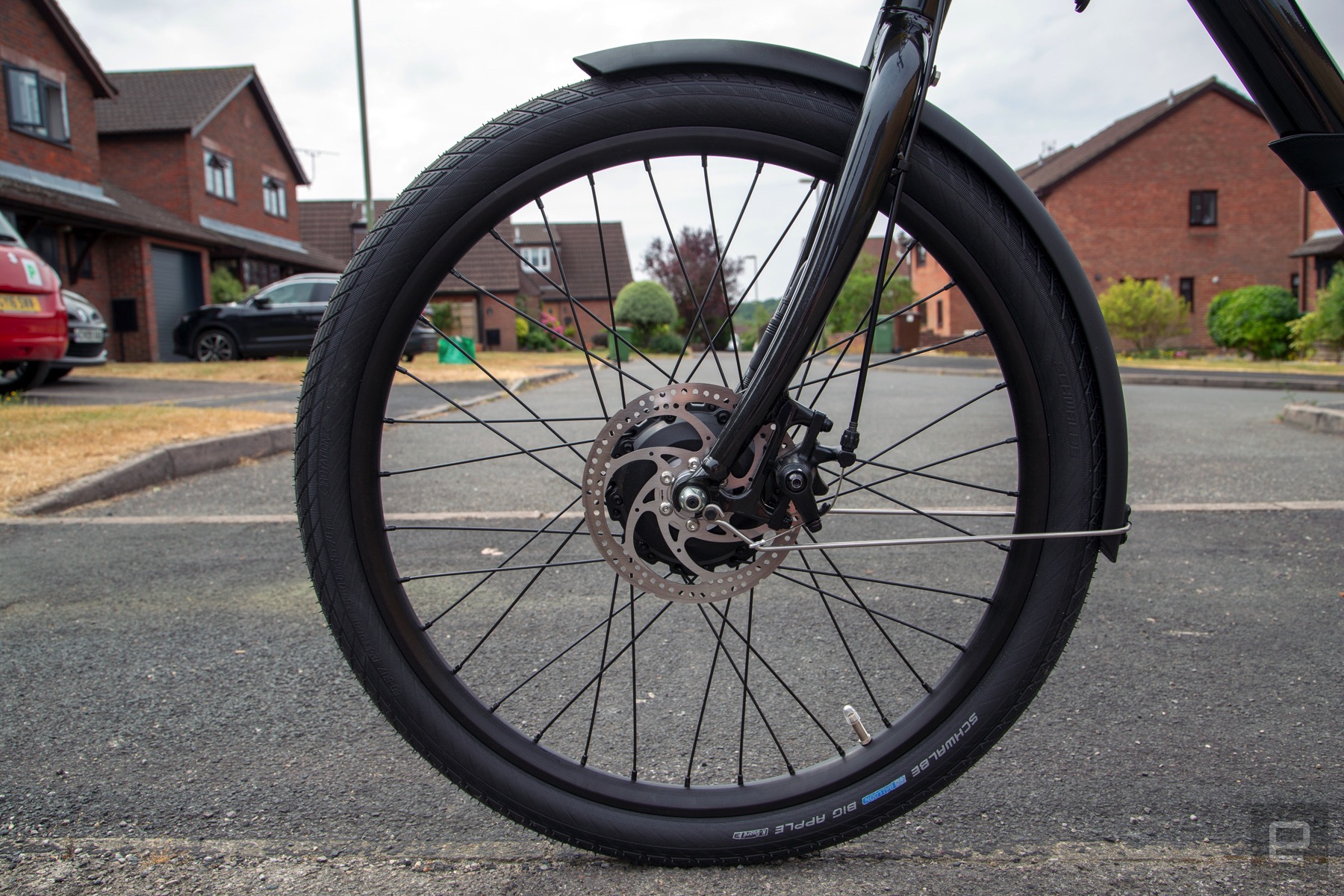 I've fallen in love with the VanMoof's electric motor, too. There are four power levels, selectable through the app or a touchscreen panel on the frame, to match your fitness (or lack thereof). You always have to pedal -- there's no option to ride it like a moped -- but it does come with an extra-fast boost button on the left handlebar. With a top speed of 20 MPH, it's plenty quick for most town trips. The 420Wh battery lasts between 37 and 74 miles on a single charge, depending on the terrain and the number of hills you're trying to ascend. I never had range anxiety, and the six-hour recharge time rarely felt inconvenient. I do wish, however, that you could remove the battery and charge it separately from the 40.6-pound bike.

At $2,498, the Electrified X is expensive. Thankfully, VanMoof has a non-electric version for people on a tighter budget. The Smart X retails for $898 and comes standard with a similar suite of safety features. You can use your phone's Bluetooth connection to "unlock" the bike or tap a Morse code–like pattern using the handlebar-mounted button. The bike is "armed" if you hold the button down and will sound an alarm if someone tries to steal it. Like the Electrified X, it has built-in GPS and will be tracked down by VanMoof's team if you have the Peace of Mind subscription.

The Smart X and S (the latter is identical, save for a more traditionally shaped bike frame) don't have an e-lock, though -- just a traditional frame lock supplied by security giant Abus. For me, that's a slight disappointment, as I liked the key-free locking mechanism. Still, the alarm and GPS tracking make the Smart X an attractive proposition for a world-wary cyclist like me. 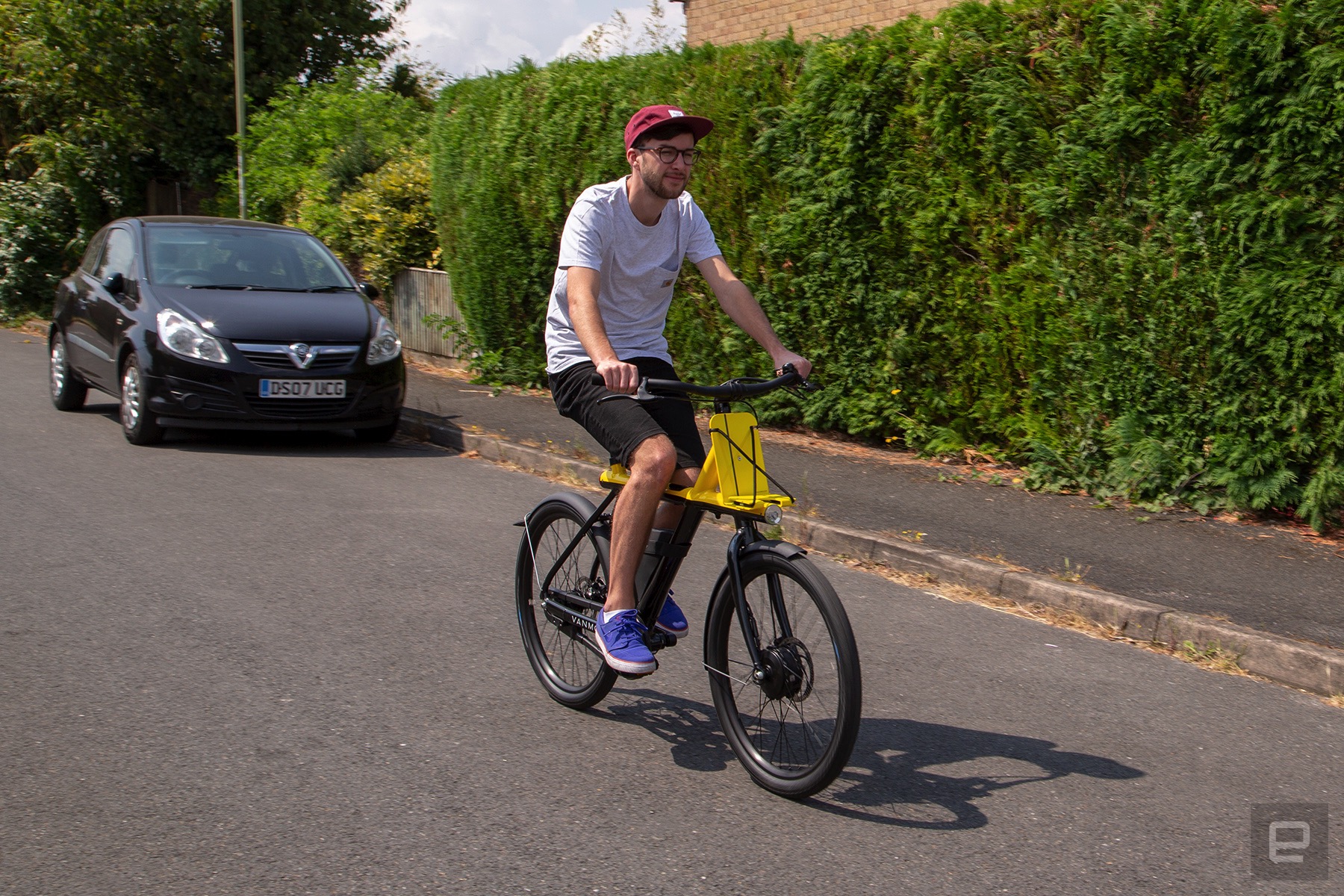 If you do have cash to burn, there's also the Electrified S2 and X2 to consider. These will be launching in September (they'll normally cost $3,398, but you can pre-order one now for $2,598) and come with a hidden "stealth lock" on the rear hub. They also sport a new "matrix display" on the top of the frame, a larger 504Wh battery (for a maximum range of 93 miles) and a faster four-hour recharge time. Like the Smart S and X, they have a car-alarm-style security system to scare away potential thieves, too.

Riding the VanMoof has been revelatory. If, like me, you've had a bad experience with bike thieves, this Dutch startup is worth looking into. Each of its bicycles is beautifully designed, with integrated lights and a finish that feels on par with the best in the industry. Most important, though, it's cracked the security issue with an array of features that should put your mind at ease.

For the first time in five years, I'm contemplating buying a bike again.