2018 Ford Mustang design breakdown: How it got that sleek new look

All the parts that make it seem longer, lower, angrier As time marches on, even icons needs a little nip and tuck now and then. Such was the case for the 2018 Ford Mustang, which, three years removed from the biggest update ever made to a Mustang (independent rear suspension, finally!), received a restyling to keep it looking fresh. The results felt controversial at first blush, but as reality set in and we've started seeing the stallions in the wild, it now seems like a natural progression of the pony car.

We've introduced you to our long-term tester, and we've told you how it drives. And awhile back we revealed that Ford's designers drew on Darth Vader for inspiration, but here's a closer examination of how it looks.

The changes made to the 2018 Mustang can be seen most clearly at the very front and rear of the car. We'll start up front, where Ford designers seemingly looked at the annals of history and settled upon 1971 for inspiration. Compared to the previous version, the 2018 model's grille is longer, lower and more angular. The location where the hood meets the fascia is a solid inch lower than before, which surely helps aerodynamics while making the 'Stang look angrier and more purposeful.

This latest Mustang's headlights have been thinned out, pulled into a taut shape, and made more crisp with three LED slashes at their inner corners and round eyelike main beams that are pinched at the top and bottom, almost as if in concentration. Of course, the big chrome Mustang emblem features front and center, and an optional Pony Package on EcoBoost models adds a chrome "corral" around the running horse.

At the rear, the 2018 Mustang features taillights with three pronounced light bars, each curved inward in a sort of parenthesis shape. These lighting units bracket a blacked-out panel with either a GT callout or another running horse emblem. A large spoiler is optional. The lower air dam features quad exhaust tips on our V8-powered GT. 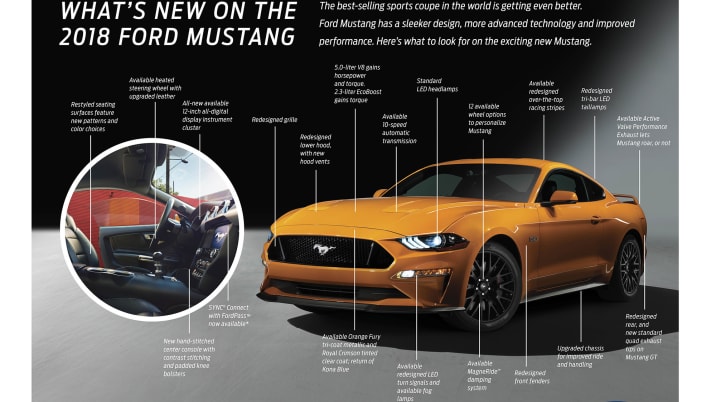 Individually, each of these styling elements is evolutionary, pushing the 2018 Mustang in a slightly more malefic direction than the comparatively upright 2015 model that preceded it. Taken as a whole, there's no mistaking the 2018 edition as the longest, lowest, and sleekest-looking Mustang ever to roll down the assembly line.