The 2018 Infiniti Q60 Red Sport 400 is an absolute beauty in person. And that's important, because, more than any other segment in the automotive marketplace, a personal luxury coupe has got to have the kind of attention-grabbing looks that can lead off the discussion about a brand-new vehicle. Like this one.

It's also important because the name Red Sport 400 conjures up a kind of performance imagery that the Q60's hardware doesn't quite live up to. But before we delve into the world of horsepower and torque, let's finish talking about style. Like most luxury marques these days, Infiniti is working really hard to put a variant of its instantly recognizable corporate face on everything it sells. Unlike some other automakers — *cough* Lexus *cough* — Infiniti has been mostly successful in the styling-led marketing push without making each new car a caricature of the model it replaced.

The fascia is dominated by a curvaceous chrome grille, which has little wing-shaped tabs that draw attention toward a dashing pair of headlights. These lighting units have LED elements that sort of form the shape of eye makeup, and while that could be a major styling misstep, it looks lovely on the Q60. Moving back from the face, there isn't a flat surface anywhere that might distract an onlooker from the overall cohesiveness of the design. The Q60's sheetmetal is pulled, pushed, and bunched like taffy strung across a whirling pair of beaters. 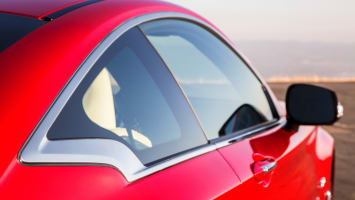 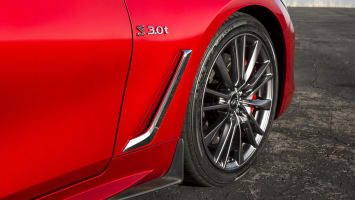 If we were to lodge a complaint about the Q60's appearance, it would focus on the superfluous chrome-tipped gill slits just behind either front wheel and the too-small displacement badge nearby on the fenders. Both of these bits are unnecessary and seem like they were tacked on at the last minute. But those are small grievances that don't do much to distract from an otherwise cohesive design, and the chrome vents can be replaced with carbon fiber for an extra $395.

It would be a sin to choose any color other than Dynamic Sunstone Red. This deep shade suits the Q60's flowing lines perfectly, and everyone who saw the car parked in our driveway had good things to say about the hue. Other colors are available, but ... just pick the red.

The interior of out test car had seats in an off-white shade of leather that looks good, but was already showing wear and discoloration. We'd probably choose the red leather seats instead. Black is also an option, but it comes with traditional carbon fiber trim instead of the show-stopping Silver Optic Fiber trim of the red and white packages. It's not often we feel strongly about a specific color palette, but trust us when we say that you really want the silver carbon interior trim to go with the Dynamic Sunstone Red exterior. 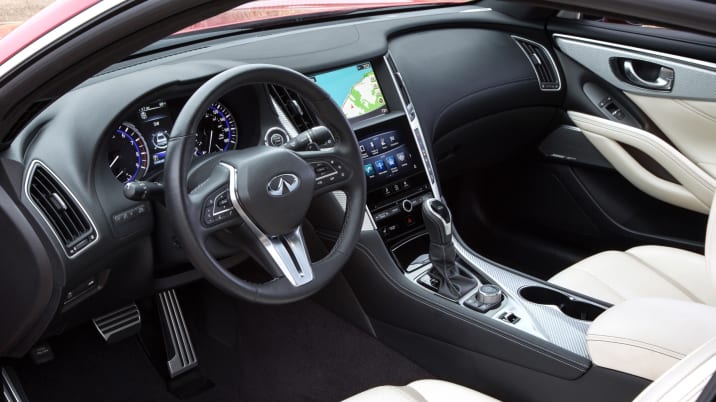 Now, back to the powertrain. There are good and not-so-good things to say about the Red Sport 400's turbocharged 3.0-liter V6 engine. On the positive side, it's smooth and feels refined in a way that the old VQ-series of engines could never hope to match. And 400 horsepower and 350 pound-feet of torque are nice, round numbers that look appropriate for a luxury coupe in this price bracket. But it barely makes a sound, even when driven aggressively and run through its entire rev range. No turbo whoosh, no burble or backfire, no low-down rumble or high-pitched wail.

The biggest problem with the engine is that it just doesn't feel like 400 horsepower from behind the wheel. Equipped with all-wheel drive, as was our tester, the Q60 Red Sport weighs 4,023 pounds, so it's not exactly a lightweight. Without access to any dyno graphs, our seat-of-the-pants gut tells us the V6 doesn't make quite enough power right off idle. And, while we have no complaints about the shift quality or timing of the seven-speed automatic transmission, it doesn't feel geared to make the best use of the high-revving powerplant.

And then there's the computer-controlled steering setup. To be fair, this second-generation Direct Adaptive Steering system is vastly better than Infiniti's first steer-by-wire effort, but there are still times when it feels more like a video game than a luxury car. We're certain there are rows and rows of ones and zeros zapping down miles of wiring and several CPUs to make it all work, because that's exactly what it feels like. Digital steering might be acceptable tradeoffs for certain vehicular types, but it's incongruous for a personal luxury coupe with overt sporting pretenses. We'd prefer a normal steering rack.

In the end, though, the Infiniti Q60 Red Sport 400 is going to sell to people more interested in the car for its beauty than its brawn or brains. And that's fine. If you've got $65,000 to spend, vanity is as good a reason as any other to choose which vehicle to park in your driveway.