It will be the 15th Corvette to do so

Joel Stocksdale
The Indianapolis 500 is getting back-to-back Corvette pace cars. After a Corvette Grand Sport led the pack last year, a Corvette ZR1 will lead this year. The ZR1's participation means that it will be the 15th Corvette to pace the Indy 500. It will also be the 29th Chevy to do so.

The car will come in a subtle navy blue metallic with red accents along the sides, and of course big Indy 500 graphics on the doors. It also will have a complement of strobe lights built in to make it as visible as possible. 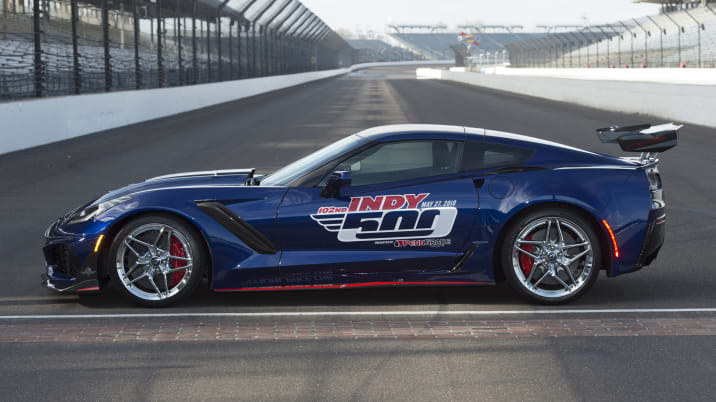 Chevy is making sure it brings out the ultimate version of the ZR1 for the big show. It features the $2,995 ZTK Performance Package, which includes a performance-tuned suspension, an even bigger rear wing than the stock one, carbon fiber end caps for the front splitter and super sticky Michelin Pilot Super Sport Cup 2 tires. Interestingly, it will be fitted with an 8-speed automatic transmission, but we suppose eliminating even the unlikely chance of stalling or missing a gear with the standard 7-speed manual isn't a bad idea. You'll be able to see the ZR1 looping the Indianapolis Motor Speedway on May 27 during the race.