2018 Volvo V60 Polestar | The last year for this performance wagon

Still a blast to drive, even in its twilight years

Welcome to the United States Canadian border in Port Huron, Michigan. Behind me is the Blue Water Bridge. Beside me is a blue Volvo V60 Polestar. This is the last year for this generation of car, and while it is old, this performance wagon is still a blast to drive.

Like I said, the V60 is old. In 2010, when this model came out, the company was still owned by Ford. Eight years later, the V60 Polestar has undergone some changes, the biggest of which is losing the turbocharged inline six-cylinder for a twin-charge, which is a turbocharged and supercharged inline four-cylinder. That engine is paired with an eight-speed automatic transmission, and produces 362 horsepower and 347 pound feet of torque.

A few of us on staff have a soft spot when it comes to Volvo wagons. Our associate editor, Reese Counts, grew up around them, his grandfather owning a Volvo 1800ES. My association is much less glamorous as I used to be driven around in my friend's Volvo 740 Wagon during college. The V60 Polestar is no doubt very different from those cars, but the look, despite being so old, doesn't feel dated. Polestar Blue is currently my favorite color of cars. It seems like every manufacturer has some version of this color, from Grabber Blue on the GT350 to Nitrous Blue on the Focus RS or Hyper Blue on the WRX STI, and I think they all look fantastic.

So let's talk about the interior for a bit. Interiors are something that I think Volvo does better than anybody else. I love the blue contrast stitching and the leather seats. The thank God this infotainment system is outgoing. This is really the only part of this car that feels old. I'm not a huge fan of Supercharger whine, but at the same time, I was really surprised at how good this four-cylinder sounds.

The next Gen V60, which has already been unveiled, is gonna look quite different from this one. It'll feature Thor's hammer headlights, and it's gonna take advantage of hybrid power to take the Wagon from 0 to 62 miles per hour in 4.8 seconds, which is only 0.03 seconds slower than this Polestar. We haven't heard anything about the Next-gen V60 Polestar yet, but there's no doubt that it'll be faster.

As tested, this car costs $62,595, more than 20 grand over the base V60, which is a price that only Volvo enthusiasts will pay. There are plenty of cars out there that are cheaper, quicker, or offer more modern creature comforts. But the V60 Polestar is special in that it offers everything in a unique package. That being said, I'd most likely take my money elsewhere. 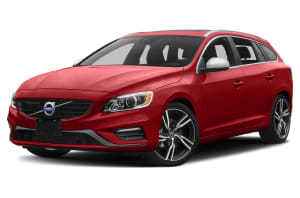