Mild changes all around

Chevrolet has a lot of changes in store for 2019. None of them are especially major, but they're coming to three of Chevrolet's passenger car models, the Malibu, Cruze and Spark. They all get mildly revised front and rear fascias, updated color schemes, and new options and packages. The amount of change varies from car to car, so we'll start with what's arguably the most significantly updated, the Malibu.

The big news for the Malibu lineup is the addition of an RS trim level. It serves a similar purpose to the recently added Traverse RS, and that of other sportier sedan variants such as the Honda Accord Sport and Volkswagen Passat R-Line. Basically, it's an appearance package that comes with a black grille, black badge, unique 18-inch alloy wheels, and dual-outlet exhaust. Unlike a car such as the Passat GT, nothing has been done to the suspension or exhaust note.

Standard Malibus haven't been ignored, though. They now get a larger 8-inch touchscreen as standard with the newest Chevrolet Infotainment 3, which comes with customizable user settings and a new appearance compared with the current MyLink system. The standard 1.5-liter turbocharged engine will now come with a CVT instead of a six-speed automatic. The big Cruze news is something sad for enthusiasts: The manual transmission is going away for 2019. It won't be available on hatch, sedan, gas or diesel engines. Instead, they'll soldier on with their existing automatic transmissions. But at least the diesel engine will still be available alongside the gas engine in both sedan and hatchback configurations.

The Chevy Cruze is getting a new trim, too. It's the LS trim specifically for the hatchback. It should make the hatchback a bit more affordable compared with the current lowest LT trim. That model starts at $22,195, and the current LS sedan starts at $19,400, so expect the LS hatch to sit somewhere in the middle.

Aside from those two big updates, there's also standard automatic climate control and remote start for LT and Premier models, the addition of Chevrolet Infotainment 3 and a new interior color. 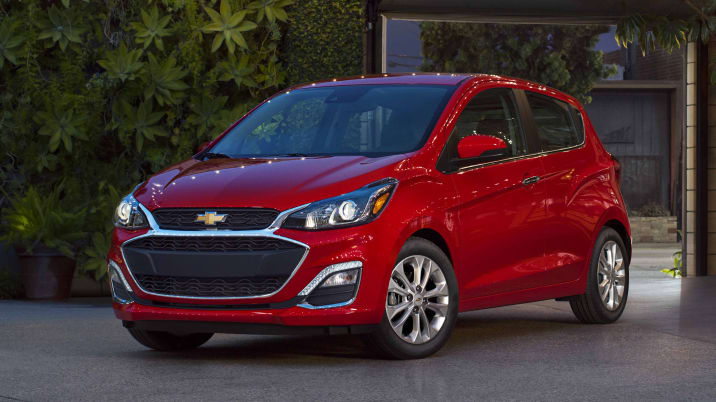 Last, and actually least in terms of changes and physical size, is the Chevy Spark. The miniscule hatchback just gets some updated front and rear fascias and a few new colors. It also now has optional low-speed automatic emergency braking.

All three of these updated models will be available later this year. We expect pricing details will become available closer to launch.