Go about your daily driving with confidence with this capable, fuel-sipping motor.

It's been a few years since we saw a diesel version of the Chevrolet Cruze. It's back now, and customers can again find their way into a new turbodiesel without stretching into the premium segment. While the Cruze Diesel was away, Volkswagen has had its hands full with its emissions scandal, meaning the Chevy enters a landscape tilted in its favor. Its new diesel engine goes into a car with which we're already familiar, and while it won't change the handling, a new powertrain in an already decent commuter could be promising.

Chevy's pretty keen on its 1.6-liter turbodiesel engine, and it's clear that it was engineered with love (or with whatever the equivalent of love is in the engineering world). It's also engineered for fuel economy, emissions, and quietness. Even its fuel delivery is impressive. Chevy tells us that the engine has the ability to inject fuel 10 times per combustion cycle, which helps improve power while minimizing emissions and vibration through controlling the burn rate. Its ceramic glow plugs and oil-pan heater mean the engine is capable of cold starts at temperatures as low as -40 degrees. Compared to the last-generation Cruze Diesel, the new engine is 60 percent quieter (in terms of sound power) than the last version. Furthermore, it can run on diesel blends of up to 20 percent biodiesel (B20) without any modifications, a commonality among all of GM's diesel engines.

But what's really impressive, at least on paper, is the fuel economy figure. The EPA rates the Cruze Diesel with a six-speed manual transmission at 30 miles per gallon in the city, 52 mpg on the highway, 37 mpg combined. If you want to do better than that, you'll have to pay the price premium for a hybrid or electric vehicle (Chevy's offerings, the Volt and Bolt start $34,095 and $37,495, respectively – more expensive than the Cruze even with federal incentives factored in). Interestingly, the nine-speed automatic transmission doesn't really beat the do-it-yourself version in terms of efficiency, as it provides 31 city/47 highway/37 combined mpg.

And fuel economy ratings can sometimes be tough to match in the real world. When our Cruze Diesel – complete with manual transmission – arrived on our lot, we were eager to find out how realistic those numbers were. 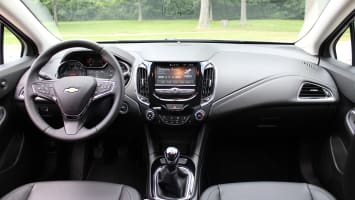 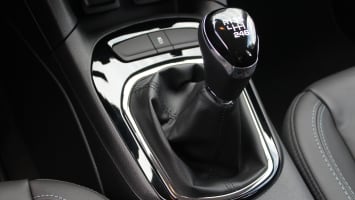 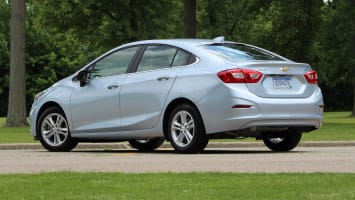 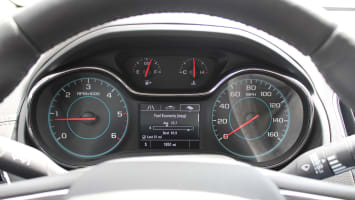 The first thing we noticed hopping into the driver's seat and heading out into traffic is that shifting is like stirring a bowl of mashed potatoes. The throws are long, and there's not much feeling to give you a sense of the lever falling into place in the right gear. The gates feel huge, so once you're use to the positions, it's easy to land the shifter right where it belongs with more confidence. The clutch pedal is light, and also has a long travel, but we were able to feel the catch point pretty clearly through our left foot. Regardless of the faults and strengths of the shifting experience, we were happy just to have a manual transmission to work with, in a world where their dwindling availability makes us appreciate any opportunity to row the gears by hand.

Our second insight, after getting in the Cruze Diesel and dicing through city traffic before hopping on the highway, was an affirmation of Chevy's grease-burning powerplant. The diesel engine is really a fine motor to use. Don't let its modest horsepower figures and fuel economy numbers fool you into thinking the Cruze Diesel is a slouch. It offers plenty of torque all over the rev range, and, as Chevy tells us, 219 of its peak 240 pound-feet of torque is available between 1,500 and 3,250 rpm. Taking off from a stop, it's quick. Downshifting to pass a semi on the highway, it perks up nicely. Even if you don't downshift before making your move, the motive power is still there. It's kind of a great, foolproof, quiet powerplant that feels more useful than something of such diminutive displacement deserves. Putting miles on it in order to seek those real-world mileage numbers would be an enjoyable task.

In the city, the suspension does a fine job of soaking up the imperfections of the road, and keeping the thumps and bumps out of the cabin both in the tactile and aural senses. That's especially nice here in Chevy's home state of Michigan, where, in spring especially, many of our roads are either pocked and crumbling or hastily patched.

Above city speeds, though, the suspension bounds over imperfections, especially when the weight is shifted to one side of the vehicle or the other in a corner. On certain freeway on-ramps, it feels like driving a boat over waves, so those who are prone to motion sickness might want to take it easy in the curves. Overall, though, most owners are going to be happy with the amount of comfort this suspension offers, especially on normal, well maintained roads, and especially at Cruze prices. 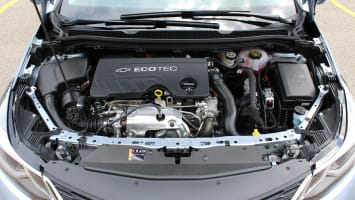 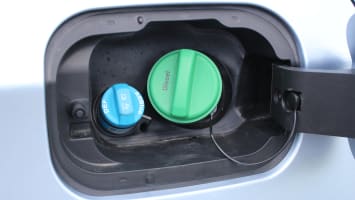 The steering has a little play on center, but doesn't feel totally dead. It's not the crispest handler, but the weight of the steering builds up nicely as you tuck it into a corner, giving a good sense that you're holding onto something and pulling it where you want to go. The Cruze places itself where you expect it in response to your inputs, too, and offers a good amount of confidence. Tie a couple corners together, and this steed starts to feel a little wild. Shifting the weight from side to side amplifies that raucous, springy feel we find at speed. It's an easy car to steer, especially under the normal, everyday use it'll see 99 percent of the time.

There's not a lot to write enthusiastically about with the interior of the Cruze. It's straightforward, no frills, and utilitarian, as seems to be common in Chevrolet vehicles. The plastics are firm, textured, and feel like they're meant to provide more durability during daily abuse than to provide the veneer of luxury. The seats are supportive without being cushy. Touchpoints are mostly hard, or very firm, versions of softer plastics. The steering-wheel-mounted buttons are covered with a rubbery material that, although looking a little cheap, offers a satisfying feel under one's thumb. Our tester's jet black interior offered a sporty look, especially in combination with the red exterior, but – and this might have to do more with our age than anything else – we've found that a touch of contrast can really spruce up the mood of a Chevy interior, and feel like the case would be the same here. Thankfully, other interior color combinations are available, in both cloth and leather versions, with certain exterior color choices – just not with "Red Hot."

For those of you with a car seat, I found that even with my bulky rear-facing Graco Forever seat, I was able to plop my son in the second row just fine, with a little bit of wrangling to get the straps attached to the lower Latch anchors, hidden deep behind their leather flaps. I had to move the passenger seat up maybe an inch more than I'd be sitting otherwise, but it didn't mean there was too little legroom up front. Our toddler test kid seemed to appreciate the pull of the 1.6-iter turbodiesel as well, as he spent the larger part of a Saturday in the backseat running errands around the city with us. As we accelerated away from stoplights, he'd yell "Vroom!" with excitement, helping provide a soundtrack in lieu of the relative quiet of this motor. Thanks, kid. 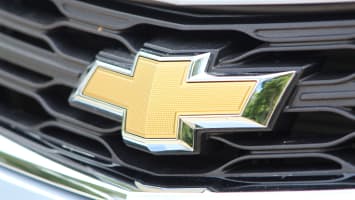 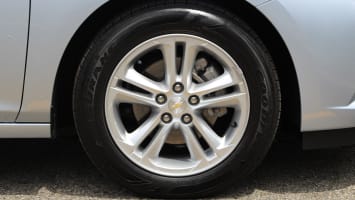 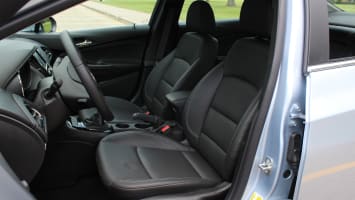 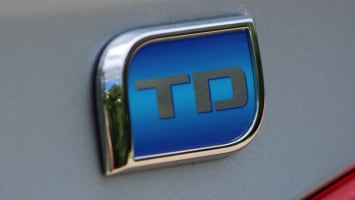 The Cruze proved to be a wonderful errand runner, too. Catching up on a lengthy to-do list after an illness and ahead of an extended trip, we found the little sedan to be a great partner to both father and son as we trekked around town, loading it up with pet food, litter, multiple stops worth of groceries, and other odds and ends that needed to get from one place to another. We were able to pack a lot of bulk – probably two shopping carts worth of supplies — into the efficiently shaped, 13.9-cubic-foot rear cargo area and the spare rear seat.

After using the Chevrolet Cruze Diesel both for around-town errands and our busy commute between Ann Arbor and Birmingham, Mich., we're happy to report that not only is the turbodiesel motor a pleasure to use, it's also efficient, and impressively so. We handily beat the EPA rating for both city and highway driving. My first leg from the office to home, I scored over 60 miles per gallon, which felt nothing short of heroic. To be fair, that was in traffic traveling slightly slower than the 70-mile-per-hour speed limit, but despite the unsteadiness of the traffic flow, we were thrilled to see our "last 25 miles" data reading nearly 63 mpg. The thing is, someone with more skills or attention to pay, or less traffic to navigate, could easily beat that. In the city, we averaged slightly better than the Cruze Diesel's 30-mpg rating, with just over 32 mpg. That was while mostly ignoring, and often driving completely contrary to, any economical techniques. Heavy-footed misers, we've found your dream car.

Starting at $24,670, the Cruze Diesel contends with upper trim levels of its gas-burning counterparts. As such, it comes equipped, as standard, with keyless start, seven-inch touchscreen with Apple Carplay and Android Auto, heated front seats, and 4G LTE Wi-Fi. Another $1,125 adds leather seating and heated, leather steering wheel our tester boasted. It's priced like the Ford Focus Titanium, which is more powerful, but definitely won't return effortlessly high fuel economy numbers (or you can go for the sporty, manual-equipped Focus ST for $25,6450, but ditto on the fuel economy). It's a similar story for the rest of the gas-powered lot. If diesel is a must-have, you could look at an older 2015 Volkswagen Jetta or Golf TDI now that they're approved for sale again, but they still won't touch Cruze's highway fuel economy. For the combination of solid diesel powerplant, effortless efficiency, and a manual, the VW is your only other option outside of a pickup.

Surely there are American car loyalists who are thrilled about the opportunity to put a greaseburner into their otherwise wholeheartedly American daily driver. We found it to be perfectly practical, if imperfect in its driving dynamics. If you're looking for a sporty-ish daily driver, you might not fall in love with the Cruze Diesel, but the combination of a torquey turbo motor and a (lackluster) manual transmission might be good enough for you.

Love the motor, but need more space? Chevrolet is putting the 1.6-liter turbodiesel into the Equinox later this year, and the 2018 GMC Terrain will also offer it. 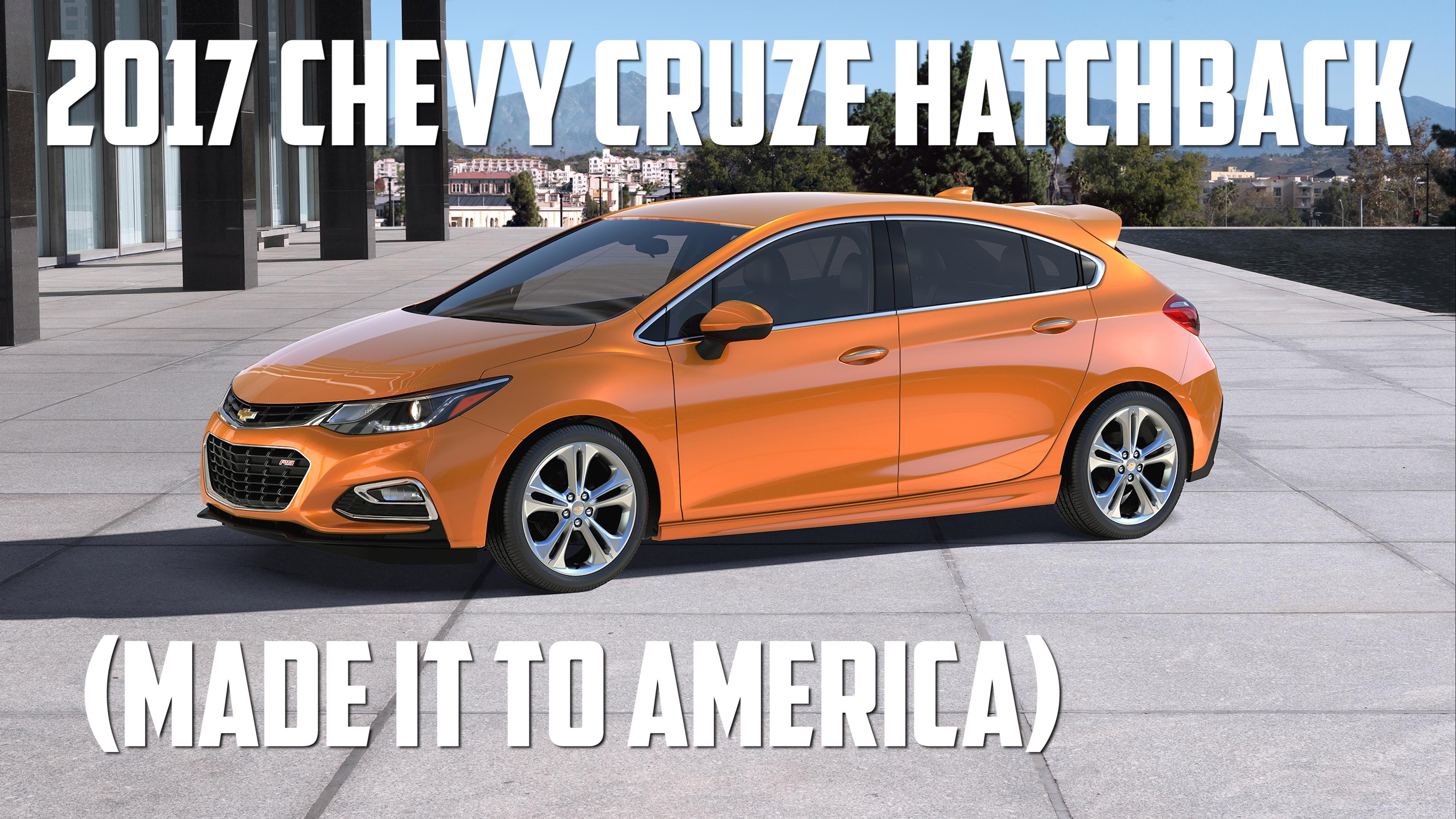