Volkswagen Atlas 5-passenger concept to be unveiled in New York

The big Atlas is getting a more intimate version.

Alex Kierstein
At last year's New York Auto Show, VW's CEO Hinrich Woebcken told reporters that a five-passenger version of the Atlas crossover would spring from a further investment in the company's Tennessee manufacturing plant. And now, VW has confirmed that it's indeed a two-row Atlas that will be produced there, joining the three-row job in the VW lineup.

And keeping with the New York theme, VW will show off a "concept" at this year's show. Don't expect anything wild; this concept will closely signal what the finalized version will look like, but will have some typical non-production window dressing. We expect it to look largely like a shortened version of the bigger Atlas, perhaps a little sportier with some slightly different styling up front and in the rear.

The concept art of the concept version shows very large, prominent lower chin intake elements, a swoopier "floating" roofline, and a three-bar grille with smaller, more integrated headlights. Not apparent is the chrome side window surround or lower molding of the seven-passenger Atlas. The most notable family resemblance is the squared-off fender bulge front and rear, with a strong character line linking the two. The concept's character line incorporated the door handles, rather than dipping below them. Since it's a concept, all of these elements are exaggerated, but the broad strokes of the styling differences should be present on the final production model.

It's not quite clear how VW will market this, and after seeing the concept art, it seems like this is more of a " crossover coupe" like a BMW X6 rather than simply a two-row version of the Atlas – so it's surprising VW isn't calling it something different. Perhaps we'll hear a new name for the vehicle in New York – similar smaller/sportier versions of three-rows often have a "Sport" appended to the name, so it wouldn't be too crazy to have this thing show up as an Atlas Sport. We'll know more in New York. 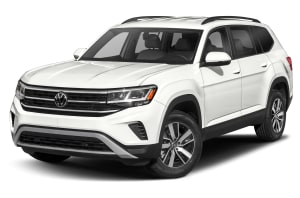 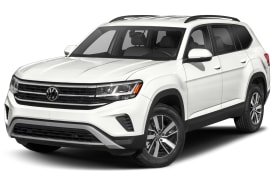