Reese Counts
Update. FCA got back to us with the following statement:

"The Jeep brand and FCA cooperate with federal/state/local governments and organizations, including Tread Lightly and Access Fund, around the world to help ensure that its vehicles are being utilized in a legal and responsible manner, and follow those guidelines when demonstrating their off-road capabilities. Ecological assessments are made and considered when the Jeep brand conducts demonstrations of a vehicle's off-roading capabilities.

The vehicle shown in this video is driving on a designated county road that experiences seasonal runoff and its performance capabilities are authentically portrayed consistent with the Jeep brand philosophy.

Other examples of how Jeep demonstrates vehicle capabilities take place at the brand's Camp Jeep activities at auto shows and experiential events."

The Super Bowl is always packed to the brim with various car commercials. FCA in particular had a big showing this year with ads from both Ram and Jeep. It's the latter that seems to have drawn the ire of some organizations, particularly one where a new Jeep Cherokee drove up a stream in a commercial called "The Road." Trout Unlimited, a freshwater conservation organization, has criticized FCA for encouraging driving that might endanger fish habitats.

Trout Unlimited President and CEO Chris Wood sent a letter to FCA chief Sergio Marchionne, calling the commercial "wrongheaded" and that Jeep got some "bad marketing advice on this one." Wood says many of Trout Unlimited's members are Jeep owners and that he previously owned a Jeep CJ7 that he took all over Vermont. He says that he took it off-roading, though he never drove right up the middle of a stream.

We're waiting on a comment from Jeep, but MSN reports that the automaker is defending the ads — though there aren't plans to run them again. Trout Unlimited says driving up and damaging streams can destroy the gravel where fish lay eggs. Either way, off-roaders should always be mindful of their surroundings so they don't destroy the land or sink their vehicles after, say, breaking through the ice on a frozen lake. 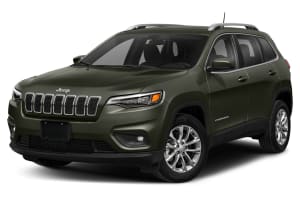