We talk to the man himself at the Detroit Auto Show.

Reese Counts
Christian von Koenigsegg isn't short on confidence. In his early 20s, he founded a car company that has churned out some of the fastest and most powerful production automobiles ever created. He's developing a camless engine that uses air pressure and electronic signals to actuate valves. The Koenigsegg Regera is a 1,797-horsepower hybrid supercar that ditched a traditional transmission in favor of a direct-drive system. Last November, an Agera RS set a production car top-speed record on a set of off-the-shelf tires. Bugatti who?


Koenigsegg told us Agera RS' record-setting run took place on a public road because "even a space shuttle landing strip was too short." Several miles too short, it seems. The car eventually hit its top speed on an 11-mile stretch of pavement. And rather than a set of specially crafted tires, Koenigsegg went with a set of Michelin Pilot Sport Cup 2s, the same kind you can order right here on Tire Rack. Seriously.

Both Michelin and Koenigsegg were so proud of that fact that they perched the car on the tire manufacturer's stand at the 2018 Detroit Auto Show. It's wearing the very same rubber that propelled the car to 277.87 mph on a Southwestern Nevada highway. In fact, those are the only tires that the car used during its record-setting runs. The team had extra sets on hand, but the tread and temperatures remained well within the margin of safety. Looking at the Cup 2s now, it's clear they've been abused, but there's a solid amount of tread still left. 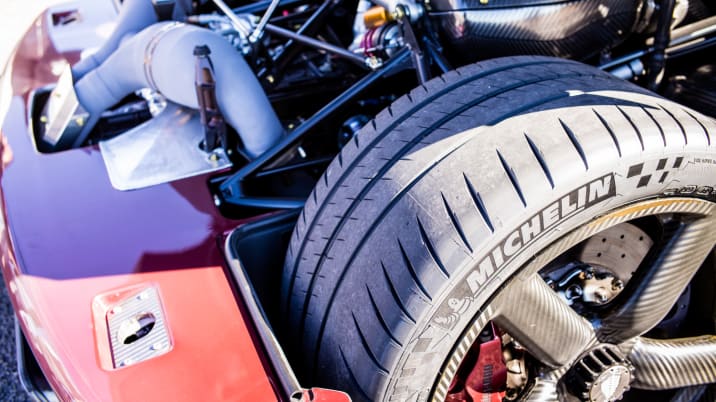 When pointing out the tires, Koeningsegg himself seemed embarrassed that that the lightweight carbon-fiber wheels weren't coated in a glossy finish like they would on a customer's car. He really made a point of saying that the wheels aren't representative of a truly finished product. The man is a bit of a perfectionist, but that's why Koenigsegg cars have the performance and reputation they do.

Instead, he prefers to point out the suspension, in particular the long-arm wishbones. Weight may be the number one thing that allowed the Agera RS to hit 277 mph (That's the average. The one-way record is 284 mph.) on street tires (3,075 lbs vs. the Bugatti Chiron's hefty 4,400 lbs), the suspension played a key role. Koenigsegg explained that a tire will slightly move left and right, scraping and scrubbing away the tread. The suspension geometry is set up in a way that keeps the tires planted and straight at high speeds, reducing the amount of tread the tires lose on each run.

Listening to Koenigsegg, you start to share his sense of excitement. He's truly passionate and proud of the cars that roll out of his factory in Sweden. Low production volume means each car can be designed and built to a certain standard. It's not enough to make a frankly absurd amount of power. The cars have to be livable and drivable and conform to both safety and emissions standards around the globe. Watch this video of a new Regera going through some brutal crash testing. The Agera RS isn't a hopped-up three-turbo Lamborghini Gallardo. It's a well-built, fully balanced product.

When asked about the future of the auto industry, Koenigsegg seemed surprisingly confident that his cars will have a market in the future. "Look at the watch industry," he said. "In the '70s, digital watches came in and nearly cleaned out mechanical watches. But there are still watchmakers around." His point is that the market has shifted, but there will always be a customer base for a premium product. "Some people just prefer to wind a watch themselves." We tend to agree with his sentiment.