Mazda plans to put this into production with a Skyactiv-X engine. Mazda is packing some serious punch for the Tokyo Motor Show, unveiling a stylish hatchback it's calling the Kai Concept to go along with the earlier reveal of the show-stopping Vision Coupe.

The compact five-door concept heralds a new generation of cars for the Japanese automaker, which is best known for making sporty, smallish and well-designed vehicles — such as the Mazda3, from which this concept derives its design direction. This version smooths over most of the Mazda3's sharp body creases in favor of smooth, undulating body panels that dramatically reflect light and reflect Mazda's KODO design language. It also gets more narrow, aggressive-looking headlights and a unique overhead profile, with two panes of glass that continue from the windshield and are intersected by a solid-color center, like a U-shaped moonroof.

The Kai is powered by a next-generation Skyactiv-X combustion engine, which uses Mazda's proprietary compression ignition system to give the gas-powered engine the fuel efficiency, torque and initial acceleration response of a diesel powertrain. Which is encouraging, considering the Mazda3 already delivers impressive fuel economy.

Inside, the concept hints at more refinement, with streamlined chrome accents popping from the black dash and interior panels. It all rests on Mazda's Skyactiv Vehicle Architecture that reflects human-centered design philosophy in everything from redesigned seats to maintain the spine's natural "S" curvature, to NVH tweaks to encourage a quieter, more comfortable ride.

Mazda has said it plans to put this concept into production, but there's no word yet on when exactly that will be. 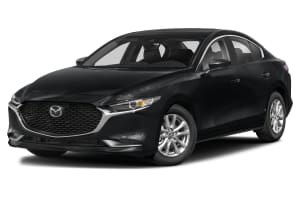