VALENCIA, Spain — You'd never guess it from the 2019 Audi A8L's subtly creased sheetmetal, but the latest übersedan from Ingolstadt hides an arsenal of computing power that makes it one of the most sophisticated sedans on the planet. No fewer than 24 discreetly hidden sensors include six cameras, five radar sensors and a laser scanner to take in the surrounding environment — a good thing, since the A8 will be the first Level 3 autonomous production car when it hits showrooms in fall of 2018 ( assuming the bill clears a U.S. Senate vote).

There may be mad tech under their skin, but the A8s on our media drive weren't equipped with some key AI components like Traffic Jam Pilot, which alleviates drivers from responsibility during nose-to-tail traffic at speeds up to 37 mph when opposing lanes are separated by a hard barrier. That's not to say there weren't a ton of other future-facing features to sample, but not focusing on the autonomous aspect offered the rare opportunity to evaluate the baseline essence of this very digital car from a driver's perspective.

Let's start our A8 experience where most drives begin: the parking garage. Audi has ballyhooed the bejeezus out of its on-street parking system that uses swarm data to mine available parking spaces at GPS destinations, but they've also developed several features on the hardware side intended to make the act of parking more carefree. 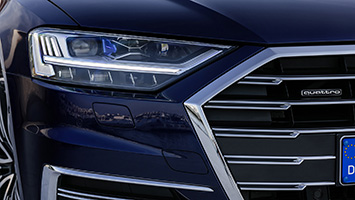 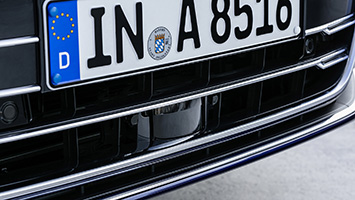 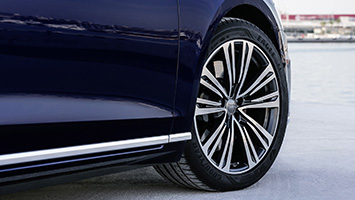 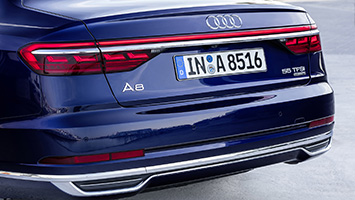 If you prefer to do most of the maneuvering yourself but could use a little help every now and then, the aforementioned array of cameras and sensors can create a 3D rendering of your car that makes it easy to visualize hard-to-see curbs or objects. You can also drag around or pan your virtual vehicle up and down for a better view to avoid pesky rim-scrapers you might not otherwise be able to spot. With dummy obstacles set up nearby and parking sensors blaring, the A8 managed to recognize the would-be paint scrapers, take over the steering, and deftly avoid them within fractions of an inch. Also available is a overhead vehicle diagram that highlights wheels in red when they near a curb.

Depending on your level of trust, you can also press the Audi AI button and have the car swerve to avoid obstacles at slow speed or, better yet, park or unpark a car from a tight spot as you stand nearby and watch. I found the exercise of watching the A8 move on its own volition both slightly harrowing and strangely reassuring, a surreal out-of-body vehicular experience that demands total trust in the computers.

Leave the parking garage and you'll have a better opportunity to savor the understated cabin, a serenely neutral space encased in double-paned glass. The prevailing theme is one of restrained modernity: touchscreens fit flushly against piano-black surfaces and primarily linear forms inspire a feeling of clean expansiveness. Passenger comfort is also bolstered by an outstanding menu of seat massage options, which include a heated foot massage panel for right rear passengers. 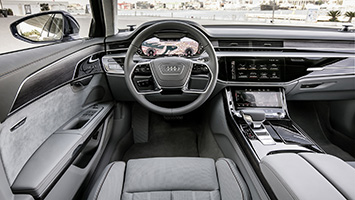 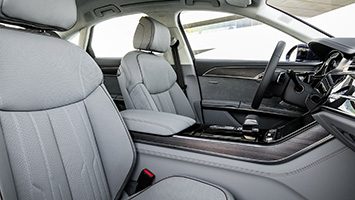 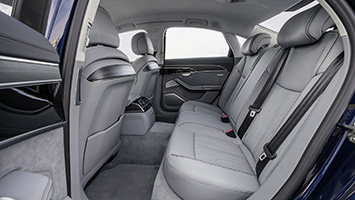 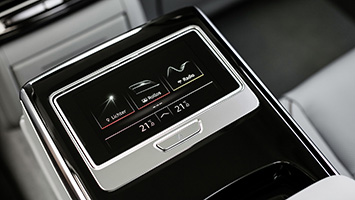 Say goodbye to analog gauges: every instrument here is digital, from Audi's Virtual Dashboard (which comes standard on all A8s) to two new MMI Touch Response screens stacking a 10.1-inch display above another 8.6-inch screen. The displays use a customizable haptic feel and "click" sound that works unobtrusively well. There's a sense of minimalist occasion to the setup, aided by wood trim pieces that swivel open to present the vents, which tilt and present themselves forward. Thankfully, the vents can be manipulated by hand unlike the Porsche Panamera, not just through the onboard computer menu. Despite the multitude of menu-driven controls, some fixed buttons remain to save your sanity including drive mode select, parking cameras, and HVAC fan levels managed by a haptic, touch-sensitive slider. Counterbalancing the digital overlords are elegantly stacked layers of wood, leather and brushed aluminum. The only lag in material quality is at the interior door handles, an unfortunate touch point where painted plastic, not real metal, meets the hand.

Audi may be tackling autonomous driving full force, but the new A8 suggests the manufacturer still cares about driving enthusiasts because it has a strong focus on chassis essentials. In this case, a new lightweight body-in-white combines aluminum, high strength steel, magnesium and carbon fiber reinforced polymers for the first time in an Audi, helping it achieve 24 percent greater torsional rigidity and best-in-class curb weight. Techy underpinnings help distinguish it from the competition, namely a four-wheel steering system that helps shrink its considerable wheelbase of 123.1 inches (which is 0.2 inches longer than its predecessor). Turning the rear wheels virtually shrinks the radius by 3.3 feet thanks to up to 5 degrees of rear-wheel countersteer at lower speeds, while higher speeds enable 2 degrees of in-phase wheel rotation for greater stability. Though the overall length has expanded 1.5 inches, the A8L feels surprisingly nimble on tight, twisty roads, seemingly shrinking as it negotiates corners despite its hulking size. 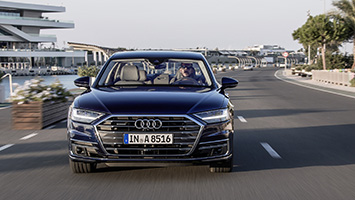 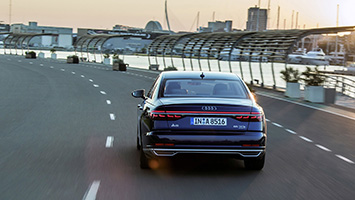 Arguably more impressive than the four-wheel steering is the new 48-volt electromechanical suspension system. By adapting to road conditions in only 85 milliseconds, the suspension can lift each wheel up to 3 inches and raise the body nearly two inches in order to maintain body control. Unlike the Mercedes-Benz S-Class's hydraulically actuated Magic Body Control System, the Audi uses an electric motor at each corner to lift and lower suspension components more quickly; the Mercedes system only works in one direction and takes longer to react. Even more remarkable than the isolated experience within the cabin is seeing it work from the outside: as the A8 approaches a bump, the body visibly lifts and allows the wheels to articulate over the irregularity. Witnessing this system at work is at once totally weird and entirely awesome, as is another demonstration Audi performed in which a dummy car was set up to sideswipe the A8. As the object approached, the car quickly raised one side by 3.1 inches in order to lessen potential injury to passengers.

The first Audi A8L to hit our shores next year will be the A8 55 TSFI, packing a 340 hp, 368 lb-ft 3.0-liter turbo V6. The powerplant, good for a claimed 0-to-62 mph time of 5.7 seconds, feels reasonably zippy but far more satisfying when the drive mode is set to dynamic. You'll need to milk each gear a bit if you're feeling like speeding, but there's more than enough grunt here for most daily driving applications. The A8 55 TSFI's sense of mellow polish has a way of toning down whatever visceral roots may be lurking beneath the surface; the cabin is quiet and the transmission smooth, and while the chassis feels connected to the road, the overall dimensions are too plus-sized to be tossable. 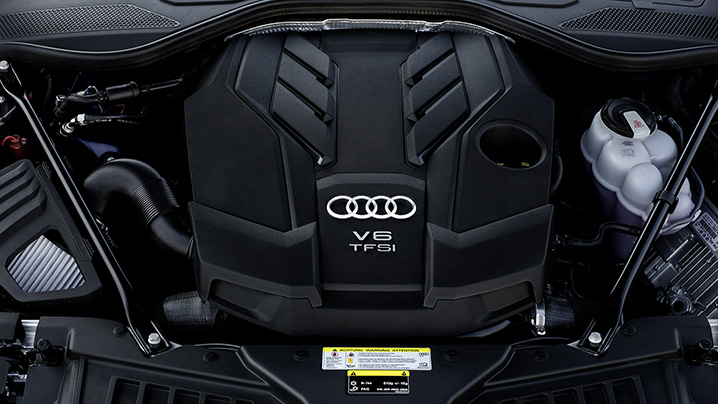 A few months later, the A8 60 TSFI will drop, sporting a 4.0-liter twin-turbo V8 producing 460 hp and 486 lb-ft. The V8 is more befitting a big, bad flagship, emitting a hushed exhaust note and smooth, robust waves of torque which are considerably more satisfying than the V6's. Incidentally, both powerplants are mild hybrids using a belt alternator starter attached to the crankshaft, enabling up to 40 seconds of engine-off coasting between 34 and 99 mph. Rather than augment the engine's sound into the cabin, Audi uses a stereo speaker-based noise cancelling system to cut unwanted frequencies and draw more quiet into the cabin. In concert with the smooth-shifting eight-speed automatic, the V8 makes for a torque-ier, more entertaining dance partner than the V6. That said, the potential sportiness of both models invariably seems masked beneath the sheen of refinement, like a valedictorian whose strive for perfection has all but ironed out those endearing character flaws.

It's easy to linger on the A8's driving dynamics, which are dominated by a sense of serene isolation rather than outright driver involvement. But the prime differentiator when the A8 hits the road will be the electronics that work seamlessly behind the scenes to deliver Level 3 conditional autonomy, a crucial stage on the road to fully self-driving cars that enables truly hands-free driving until the computer prompts you to take over. While the A8's implacable persona might be a bit removed for some, it just might be the perfect complement to a car capable of driving itself when the conditions allow.