BMW 3 Series, meet the cousin you never knew you had...

SEOUL, South Korea — As schoolyard cliques go, the triumvirate of premium German small sedans has always been nastily effective. Sure, the gang's leadership sometimes swaps around, favoring whichever one has the latest engineering or marketing trick, but what they do even more effectively than beating each other is blocking out the new kids.

Lexus and Infiniti came over all friendly and were derisively turned away. The Jaguar XE and the Alfa-Romeo Giulia have been treated with disdain, too, even if they arrived with style and (for now) EU passports. It's mostly because, as they've always done, the BMW 3 Series, the Audi A4, and the Mercedes-Benz C-Class compete so ferociously with each other that they barely notice anybody else.

But they'll notice the Genesis G70. They will notice because the G70 is so comprehensively good that anybody who skipped beyond the badge could easily think it came from within the German clique. Specifically, it feels like a combination of the best parts of the one from Munich and the one from Stuttgart. 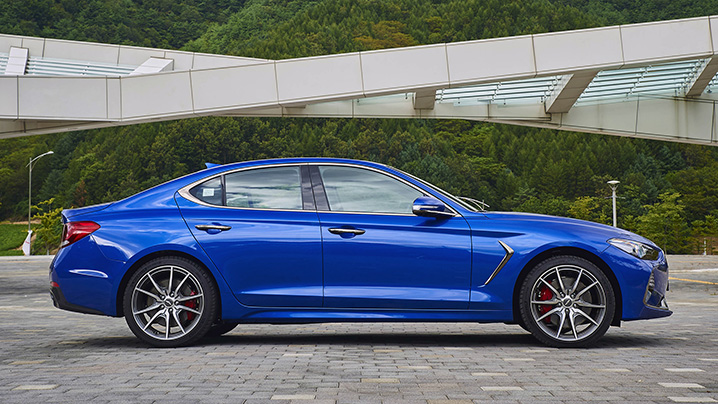 It could pass for an M car from the rear three-quarter view, but with a lower, wider, more ready-to-pounce stance, though the front end is less resolved. And from the driver's seat, its balance, poise and assurance do what a 3 Series does, only sometimes better and more cheerfully, with cleaner lines of communication.

It's not just good, though. It's critically good. And it's not just that the G70 is Genesis aiming right into the heartland of the German automakers' cashflow, but that the G70 is really the first purebred Genesis, following the more Hyundai-based G80 and G90 luxury cars.

The aim of the carefully poached dream team of Genesis designers, marketers and engineers was to make a beautiful car that was brilliant to drive. They got one of those things unerringly right, and the other is a bit more controversial. 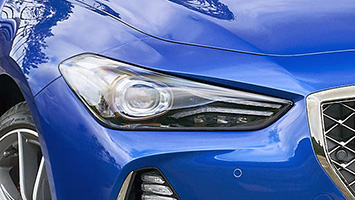 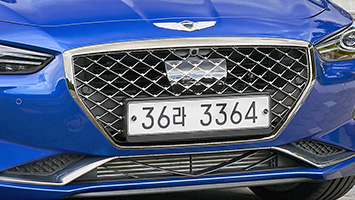 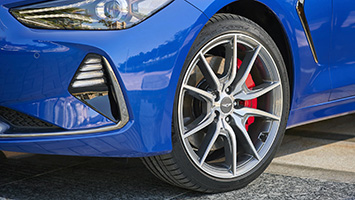 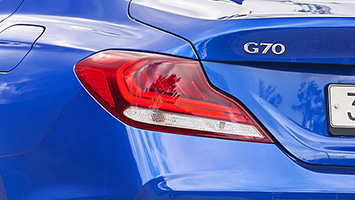 A PEER ON PAPER

The figures are right there on size for all of the German rivals, and most of everybody else, too. Its 184.4-inch length runs 2.4 inches longer than the 3 Series, while its 111.6-inch wheelbase is a neat inch longer. It's also nearly two inches wider, but the F30 BMW is a scratch over an inch taller at the roofline.

The G70's charge into the U.S. will be lead by a 3.3-liter V6 turbo engine, complete with about 365 horsepower and 376 pound-feet of torque (with the MY2019 models not arriving here until March or April next year, the numbers are not yet locked away).

At 4.7 seconds for a sprint to 62 miles per hour and a 167-mph top speed, the V6 will effectively sit right on top of the BMW 340i and the xDrive version of the Bavarian sports sedan. How close is it? Well, the G70 3.3 T will have an advantage of more than 40 hp to the Bavarian, plus it gristles out another 52 lb-ft of torque, at least when comparing factory ratings. 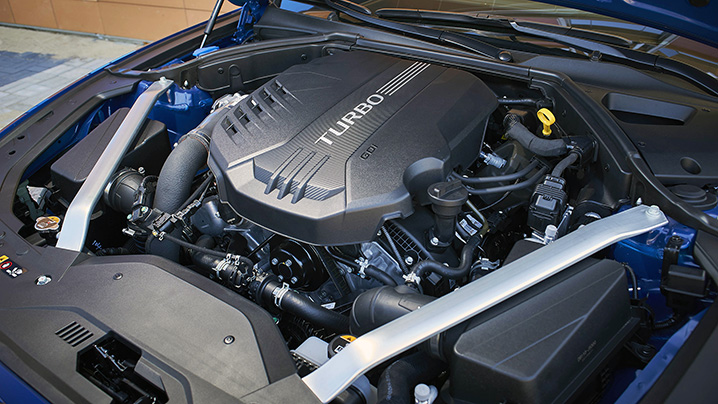 Beneath that will be a turbocharged 2.0-liter four-cylinder engine. Both versions will be available in rear- and all-wheel drive and with mechanical limited-slip differentials are attached to all the rear ends. Compared to the BMW 330i xDrive, the G70 2.0-liter motor has exactly the same power but an extra 7 lb-ft of torque.

There's a Hyundai Group-developed eight-speed automatic in charge of the shifting across the board, except for a six-speed manual gearbox which is optional with the 2.0-liter car. The all-wheel-drive cars are about 130 pounds heavier than the rear-drivers, too, and while we don't have a curb weight yet, development boss Albert Biermann insists the V6 Turbo's all-wheel-drive model runs "about 55 percent" of its weight on the front axle, while that drops to only 52 percent for the rear-drive 2.0-liter car.

Beneath the skin, there's a multi-link rear end supported by a constantly variable damping system, an electronic power steering system with the motor directly on the steering rack, and five driving modes, peaking with Sport. 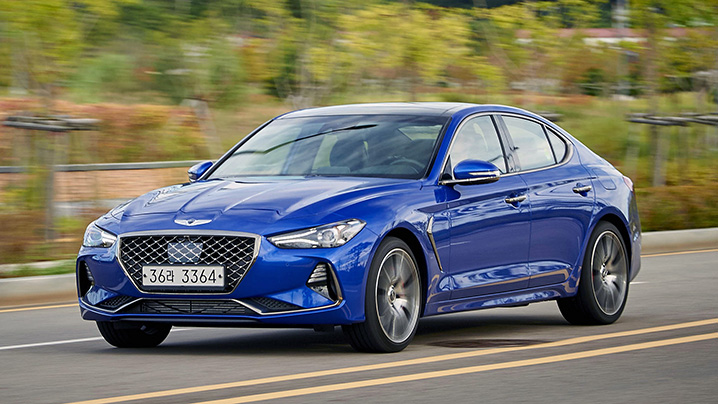 We've now had two bites at the G70 cherry. The first was a few months ago at the Namyang development center, where we sampled all of the models (including the 2.2-liter turbodiesel, which will have at least a two-year wait before it's Europe bound). The second was over the weekend in Korea, but only with the V6 T, and the initial impressions were more than good. A lot more. Our time with the V6-powered G70 involved escaping from the heart of the megacity of Seoul at morning peak hour, hours of stop-start traffic jams, some winding mountain passes, more open freeways and one of the strangest, most isolated race circuits known to man.

First off, the G70 is comfortable. Biermann explained that the G70s we drove in Korea were in local spec, complete with squishier damping and spring rates to cope with the dominant features of the Peninsula's road network — traffic jams and speed bumps. It's a whisper-quiet thing when it needs to be, with even the motors for the electric seats lashed with engineering until they spoke no more.

The interior is cosseting and luxurious, with diamond-style quilting in the doors and seat facings, plenty of gadgetry and flawless stitching and panel fit. Inside, the G70 is a nice place to be; warmer and using classier materials than a 3 Series, but losing nothing in design or luxury to a C-Class or an A4. Your fingers can't find cheap plastic anywhere in the cabin, and BMW's own use of a stick-up infotainment screen validates the G70's unit.

Instead of plastic, the G70 uses a lot of aluminum pieces throughout the cabin on the basis that if it looks like aluminum, it should be aluminum (and it's hard to remember when the Germans forgot that, but they did). Android Auto and Apple's CarPlay are both standard equipment, while the infotainment screen uses touchscreen technology. The driving position is easy and comfortable, there's more legroom (though not by much) in the back than in the BMW, and it's a capable long-distance mile eater. The traffic-filled and boring roads of the damned left us plenty of time to test the Level 2 autonomy in the car, and it works easily and neatly off the cruise-control unit. 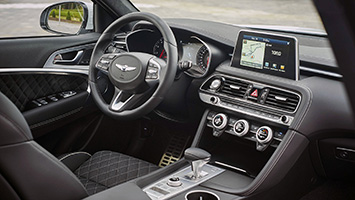 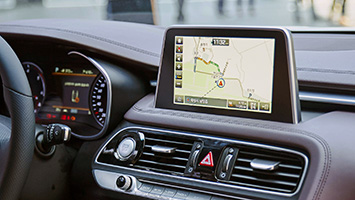 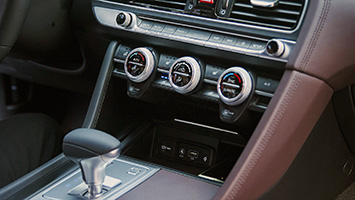 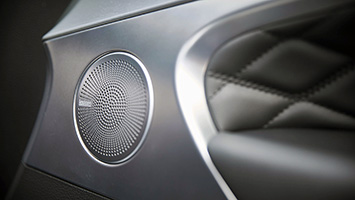 The V6 Turbo fires up cleanly, with some depth and always smooth, then it's just a tug on the stubby gearlever and the G70 rolls out of the hotel carpark. There's a trick the G70 has in its layout somewhere that makes it both a clean, crisp handler and a comfortable city ride, and it's a line it walks better than the 3 Series, which (up at this level) can be hamstrung by truly dreadful steering and a ride that deteriorates as the tire profiles shrink on bigger wheels.

Sure, it's a bit soft in its Comfort mode (there are five modes in all), but that's how the locals like it and how they think it should work on local roads. However squishy the ride gets, it remains accurate and predictable. One shortcoming (on paper, at least) is that four-cylinder cars get only two-piston calipers up front (plus single-piston rear brakes), though the V6s all receive an upgrade to a four-piston Brembo front and two-piston rear-end upgrade. The steering is a little light at speed in Comfort, too, though it remains accurate with reasonable feedback, but it all improves in the Sport mode.

Sport mode feels like it's somewhere closer to where the car's default setting should be, tightening up the transmission shifts, the throttle response and active dampers, plus a few other things. It also leaves the G70 with a package that feels coiled and ready to pounce without ever being remotely uncouth over bumps. 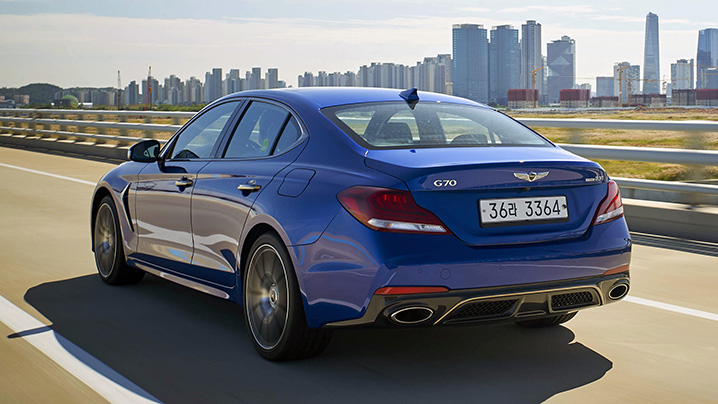 Perhaps the only issue with the G70's refinement package is that the V6 goes through a slightly coarse patch as the tachomoter needle swings beyond 4,000 rpm, before moving back into calmer territory a thousand revs later. By that time, though, the G70 is moving quickly and proving Genesis's arguments that it's a genuine sports sedan. There are paddles for shifting on the wheel and in our experience, the best steering feel is to be found in the all-wheel-drive cars.

The chassis balance is one of the car's highlights, leaving the driver to choose whether to lean on the nose or the tail, teasing you with long, languid drifts (even with the ESP switched off) and the gearshifts snapping up and down without artificial crackles and bangs. The car can be balanced on the throttle through long corners and finds grip at the rear. Unlike its German cousins, though, it never feels like it's in a race to get the body flat again, and it's happy to sit with the springs and dampers under tension for as long as there's a corner. The body control is good, but not yet brilliant, with the body rolling gently and calmly waiting for instructions without threatening life and limb, even when corners fall away or diagonal cuts in the road appear.

There is more. A Dynamics Edition of this car is also on the way and it's brilliant, whipping through the South Korean hills as easily (and almost as quickly) as running your finger on a line on a map, but a lot faster.

Biermann says the U.S. will get its own specification, which will bring different (all-weather) tires and sharper roll control. Given how much we enjoyed our time with a Korean-spec G70, we can hardly wait for our first crack at the latest Genesis once it makes it Stateside. 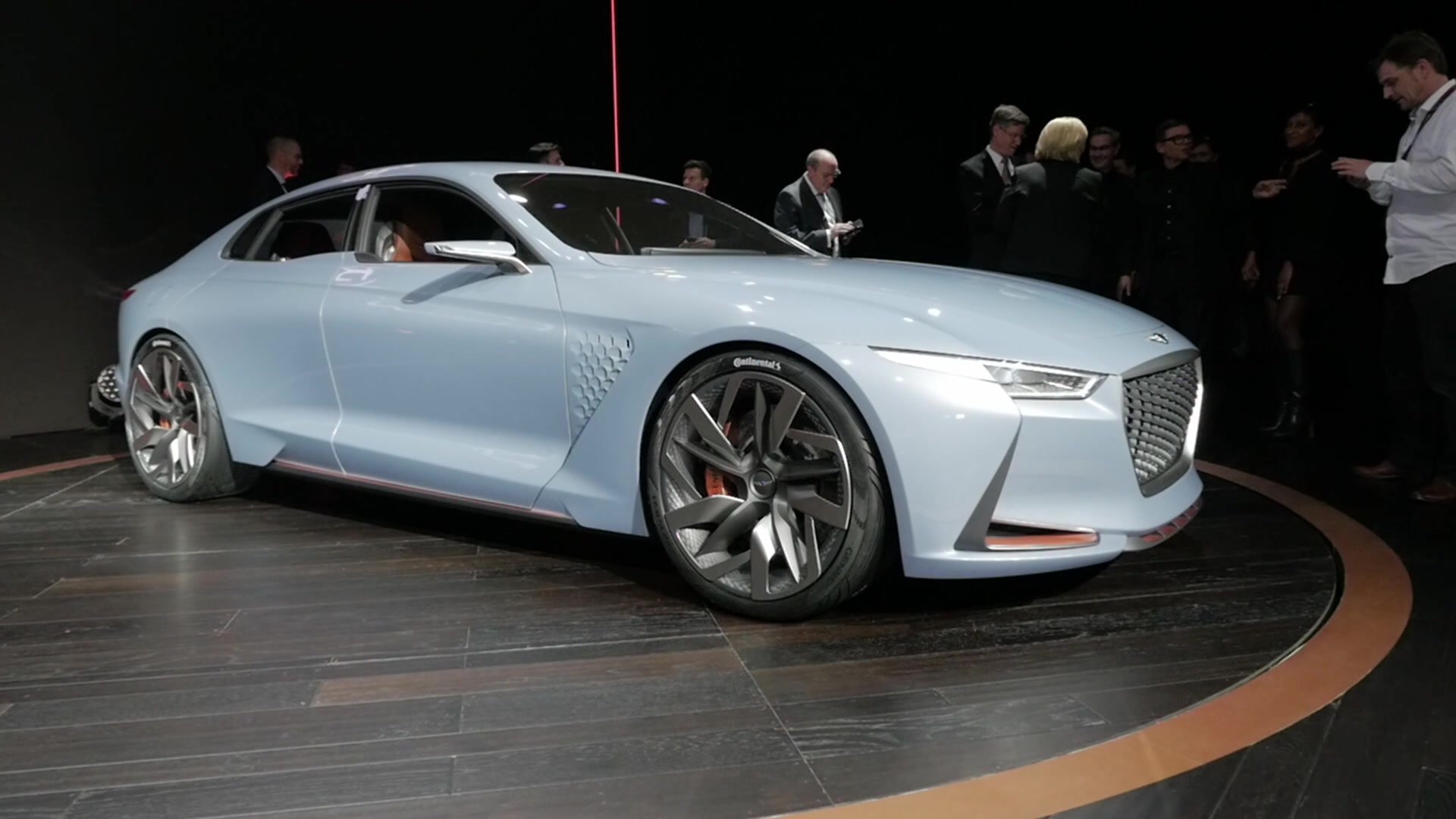