This week, we have the biggest, baddest BMW sedan around, the 2017 M760i. This thing packs 12 turbocharged cylinders under the hood, good for 600 horsepower and 590 pound-feet of torque. All-wheel drive helps send this 2.5-ton 7 Series to 60 mph in 3.6 seconds. A sea of leather and wood ensure that trips on the Autobahn are done in quiet comfort.

Still, this car wears an M badge, even if it isn't a full M-tuned model. That little letter carries with it a lot of history and pedigree. Does this car deserve to wear the M designation, or is it simply a pretender? Does it even matter if it's still good to drive? Here's what we think after a week behind the wheel.

Senior Editor, Green, John Beltz Snyder: It definitely feels like you're driving something special when you're behind the wheel of the BMW M760i. Every time I approached the car, I'd take a moment to soak it all in. The "M" and "V12" badging really stand out against the matte gray paint, the wheel pattern is intricate and sporty, and the sheer size of the 7 Series is imposing. It all serves to get you pumped up when you climb in. But, my colleagues ask me, does it feel like an M car?

While it's not for me to decide what BMW applies the M treatment to, I'd say that this doesn't really feel like it's in the same club as the rest of the M Bimmers I've driven. It feels neither hardcore nor track-worthy. It's quick, but it sometimes feels more like a boat than a car (especially the way the nose lifts skyward under hard acceleration). There are a dozen pots under the hood, it's expensive, it begs to be photographed, and I enjoyed driving it, but to me, that doesn't make it an M car. I suppose BMW's choice to put the M badge on it is the beginning and end of that debate, though.


Associate Editor Joel Stocksdale: As I'm sure my colleagues have also said, the M760i doesn't feel like a real M car. BMW doesn't consider it a full M car, since it's not called an M7, but it still doesn't feel sporty enough to wear the M badge. The suspension is very soft, almost marshmallow-like in normal settings, and sport turns those marshmallows stale. This is particularly evident when demanding full power from the 600-horsepower V12 under the hood. The nose rises like a '70s muscle car as the power hits the pavement. The transmission is sluggish in manual mode, making it less engaging.

But just because the M760i doesn't feel like an M car doesn't mean it's not good. That V12 is still a blast to play with. It accelerates the big Bimmer to extralegal speeds without a second thought. The transmission, although not quick, is velvety smooth. And the soft ride, though a little floaty, polishes away all pavement imperfections. The BMW also doesn't feel like the enormous car it is when you're driving it. It's easy to navigate tight turns, the steering is quick, and the car feels fairly light. I was also pleased that you can sit rather low inside.

A person could get used to the full recline setting in the @BMW M760i. @therealautoblog pic.twitter.com/6ItYs78DlB


The M760i is awash in plush materials and toys. It has supple leather everywhere, and this particular model had unique quilted piping on the seats. There's groovy mood lighting throughout the cabin, a high-quality sound system with en vogue aluminum speaker grilles. Every seat is endlessly adjustable, and the best of all is the right rear passenger seat. It has a full recline function that performs quite the electromechanical ballet to fully recline the passenger seat. It folds down the headrest and seatback of the front passenger seat and moves it forward and deploys a foot rest from that seat's back. It's not unique for this class of car, and I would like the seat to recline more, but you can't help but be tickled as everything moves about. Once situated, there's a Samsung tablet that can be deployed to adjust lighting and sound, as well as a remote for the infotainment system.

And if the M760i were the only high-speed 7 Series BMW offered, I wouldn't have any other complaints. But, in the words of Jedi Master Yoda, "There is another." Specifically, it's the Alpina B7. It also makes 600 horsepower. It's also all-wheel drive. The only obvious difference is slightly different styling, different pricing, and the fact that the B7 has a V8. Styling and cylinder count are subjective, but pricing isn't. The B7 has a big advantage here. It starts at about $139,000, while the M760i starts at about $157,000. That's almost $20,000 to say you have more cylinders than the other guy. And you can't see those cylinders either, thanks to BMW's insistence on coating the entire engine in generic black plastic. So the M760i is a good car, but because I like the styling of the B7 better, and the price, that's what I would go with.

Associate Editor Reese Counts: Not to sound jaded, but I haven't been surprised by a car's speed in a long while. That's on me; 600 horsepower from a 6.6-liter twin-turbocharged V12 is nothing to scoff at, but, at just over 5,100 pounds, this thing weighs as much as a small moon. I expected that extra weight to slow it down. I knew the car would be quick, but not quite like this. Stab the throttle and you're risking several points on your license in a matter of seconds. BMW says the M760i xDrive hits 60 mph in 3.6 seconds. Feels about right to me. So, M760i, I apologize for underestimating you.

That said, this isn't an M car. I could go on a rant about how this waters down the brand and is simply a marketing ploy to cash in on the aura surrounding the M division the same way Mercedes is cashing in on AMG with the C43 and E43, but I won't. Suffice to say this is a performance-minded 7-Series, not an M-division car.

The suspension isn't sports-car sharp, but it's not uber-lux smooth either. It's good, but not what I expect from a car like this. The steering talks like an experienced drunk, slurred and mumbled but still somewhat coherent. Still, it's weighted well and fairly direct. The brakes have plenty of stopping power, but there's a lot of dive thanks to the soft suspension. The car tends to wallow and roll when taxed in a corner.

Whatever. I can forgive a lot of faults if a car has a good engine. (See: Chevrolet Corvette Z06, Shelby GT350, Jaguar F-Type R and more.) And the M760i has a really good engine. Ignore the M badge and think of this as a 48-valve cruise missile. V12s are dying, and we should celebrate the fact that BMW still offers one, albeit at an astronomical price point. The sound is wonderful, even if some of it is artificially pumped through the speakers. It's easier to ignore that and enjoy what's on tap under your right foot. Enjoy the cush seats. Enjoy the excellent sound system. The car is very good, questionable badging aside.


Editor-in-Chief Greg Migliore: I turned left out of my subdivision, nailed the throttle, and this big car shot forward with a sinister growl. A smile crossed my face immediately. V12s are awesome. But the M760i is more than just a big engine, potent as it may be.

With the executive-style backseat, it's a true luxury liner. There's plenty of room to recline, and the tech is handsome, useful and well-integrated. My passenger elected to sit back there for our evening activities, and she thought it was a first-class experience. Front and back, the cabin is well-appointed and attractive, and the tan leather and elegant trim are a nice contrast to the matte gray exterior. The outside looks sharp, and the understated color — think battleship armor — makes cues like the headlights and wheels stand out more.

Is it an M car? Eh. No. BMW doesn't even really say that it is. It's basically a really luxurious and powerful version of the 7 Series flagship. The chassis tuning and general body roll mean it's just not athletic enough to wear the full-on M badge. Still, it's pretty great anyway.


The @BMW 760i has a V12, but these lights are captivating. pic.twitter.com/djjmrEzor2 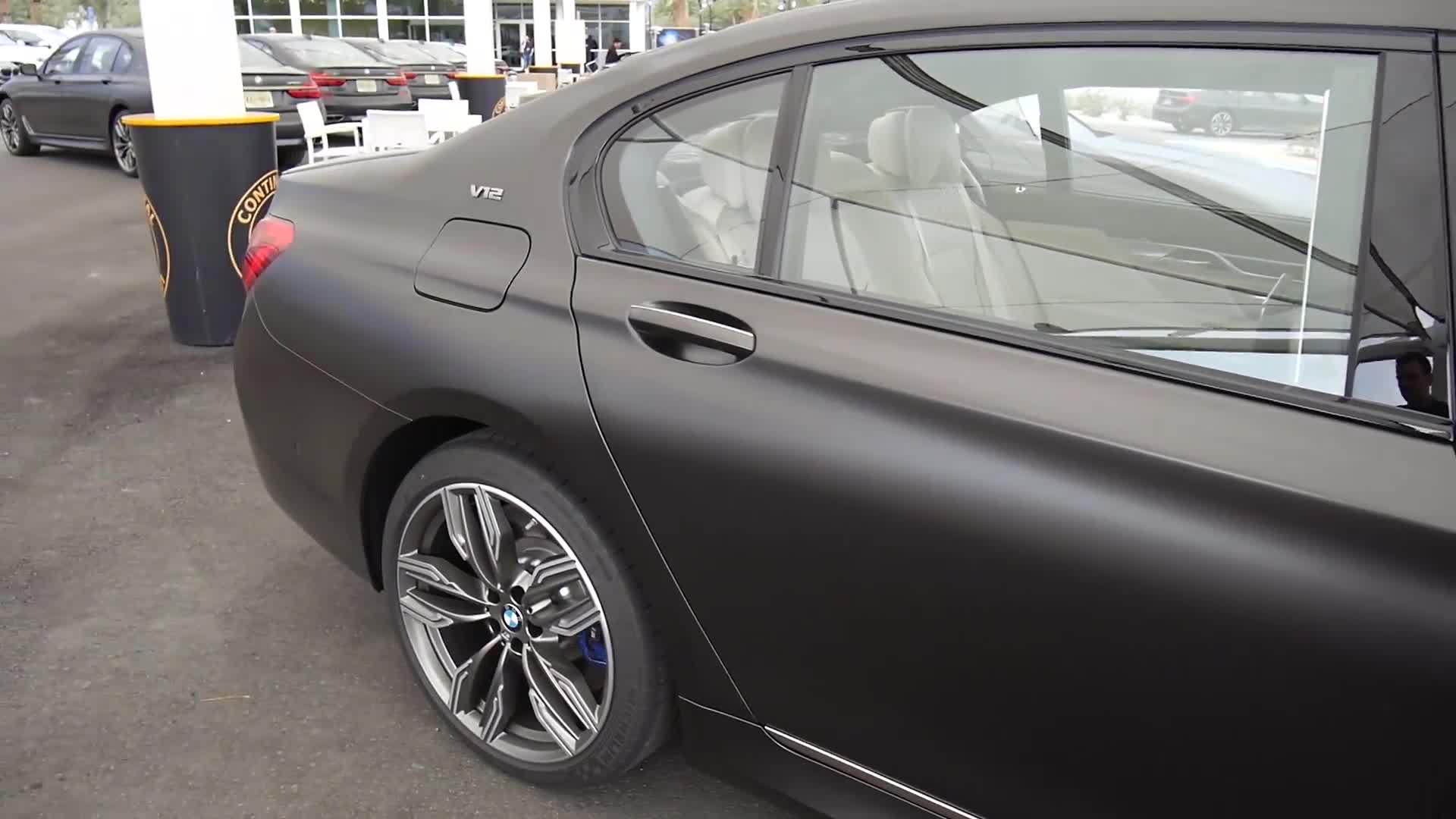