We have mixed feelings about it.

When we got the 2017 BMW 540i xDrive in the office, there was much discussion about the car's Display Key. The words "technology nobody asked for" were bandied about, and we chuckled over the fob's somewhat comical size.

For those of you who aren't familiar, the BMW Display Key is equipped with an LCD color touchscreen. It performs the standard functions of a key fob – locking, unlocking, keyless start – but its screen allows it to integrate a number of features from BMW's Connected app.

You might be thinking the same things we were. Why the redundancy? Why not just use the app and not have to carry around this giant fob? How easily will this thing break if I drop it? Do I have to charge this thing? 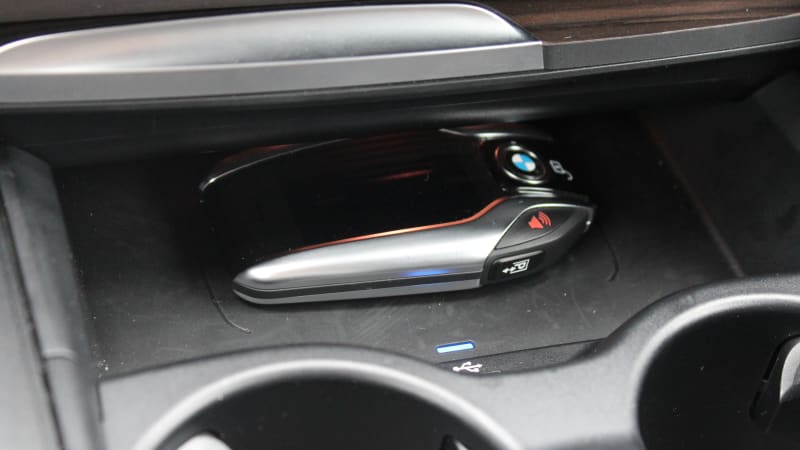 While some of those questions aren't ones we can actually answer, the last one is. There's a micro USB port on the side of the Display Key, which means you can plug it in to charge as needed. Mercifully, it can also charge wirelessly, because who is actually going to plug in their key? Our 5 Series has a charging pad on the center console just ahead of the cup holders, where the fob would automatically begin charging when placed there. Yes, that meant we often found ourselves returning to the car to grab the fob we'd forgotten to pocket at the end of our drive. That's much better than the first time we tested this key at the launch of the 7 Series.

So what does the Display Key actually do in addition to normal smart key functions? It displays the status of the car, which includes door locks, windows, an alarm, fuel range, and upcoming service requirements. It allows you to precondition the car, or schedule it out, so the HVAC gets the interior to your desired temperature before you get in. The most fascinating feature by far, though, is the remote control parking function, which, according to our tester's window sticker, was a $750 option.

R/C parking, as it's labeled on its Display Key screen, allows you to move the car forward and backward from outside the vehicle (it won't work with the key inside the car). It's a little tricky to do, as it requires the operator to hold down a button on the side throughout the procedure, while pressing arrows on the LCD screen to move the car. It uses the sensors to alert you to the proximity of another vehicle or object and will stop before it hits it, but it won't recognize curbs or paint lines on the ground. It will move the car as far as about 1.5 vehicle lengths at a speed of about a mile per hour. We noticed about a half-second lag in the time between inputs on our remote and response from the vehicle, so it's good that it really creeps.

Theoretically, one would use the remote parking to fit their BMW into tight parking spots. The thing is, if you can't get out of your car without dinging the one next to you, the drivers of those vehicles will have the same problem getting in theirs unless they can also remote park. The feature seams better suited for those few owners whose home garage is particularly small.

The R/C parking is a really cool party trick. Friends of ours keep telling other friends about the time they watched us drive a BMW by remote control.

Featured GalleryBMW Display Key in the 2017 540i