Today, at its birthplace in Spartanburg, S.C., BMW revealed the all-new 2018 X3. The model gets a host of new features and equipment, and, for the first time, an M Performance variant. Along with a new platform, the X3 gets new engines, new technology, and promises to drive better than ever. The US will get two models at launch, the X3 xDrive30i and the X3 M40i. Pricing hasn't been announced, but the new model will go on sale in November.

As before, the X3 will be built alongside the X4, X5, and X6 SUVs in South Carolina. The current F25 generation X3 has been on sale since 2010. Despite a mid-cycle refresh, the model was due for an update. The general dimensions remain the same, but the wheelbase has been extended by 2.2 inches, cutting the front overhang and helping balance the impressive 50:50 front/rear weight distribution.

The styling is basically an evolution of the current design. It's a handsome little SUV, but there's nothing groundbreaking here. The X3 simply looks like a smaller X5 with some modern updates. There's the vent behind the front wheels, LED lighting both front and rear, and sharp character lines on the hood and along the side. The xDrive30i gets lots of chrome and silver accents all around the car. The M40i eschews much of that in favor of body color accents and big M-style ducts and vents. For the first time, the X3 can be equipped with a factory-installed trailer hitch. 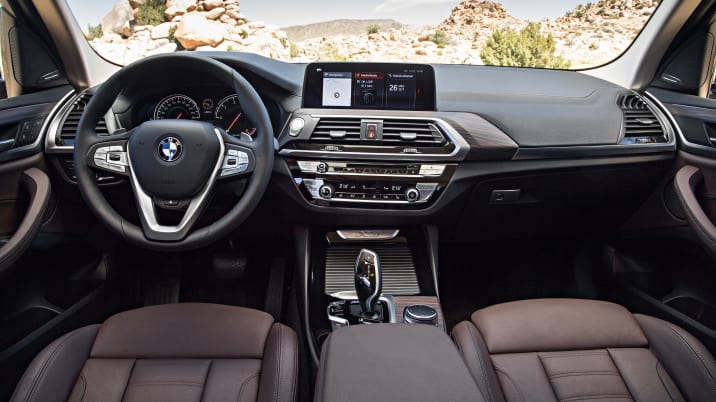 Like the exterior, the interior is handsome but unsurprising. It, too, is an evolution of the current X3's design. There's still the wide, forward-swept and driver-focused dash, floating infotainment display, and familiar HVAC controls. The X3 now has three-zone climate control and a panoramic moonroof that's 9.8-inches longer than before. The rear seats fold 40:20:40 and can be released remotely from the cargo area.

The full-color heads-up display is 75 percent larger than before. The 10.25-inch touchscreen gets BMW's neat but occasionally clumsy gesture controls. It's equipped with the latest version of BMW's iDrive, 6.0. In addition to gesture controls, various voice commands can be used with iDrive. Connectivity is on the rise, and the BMW Connected apps for iOS, Android, and wearables like the Apple Watch and Samsung Gear S2 and S3 will all be integrated. Customers can do things like check fuel levels with an Amazon Echo.

As expected with any modern vehicle, the X3 will pack a whole suite of active and passive safety features. Everything you would expect is here, including, adaptive cruise control, blind spot monitoring, lane departure warnings, cross traffic alert, and traffic-jam assist. Parking is made easier with BMW's trick remote camera view and ParkNow service. The latter uses historical data to map likely parking spots. The X3 comes with two engines, the 248-horsepower turbocharged 2.0-liter inline-four for the xDrive30i and the 355 horsepower turbocharged 3.0-liter inline-six for the M40i. Both models are mated solely to an eight-speed automatic transmission and all-wheel drive. The M40i can hit 60 mph in just 4.6 seconds and reach a top speed of 155 mph. Peak 369 pound-feet of torque on the inline-six arrives at just 1,520 rpm, remaining flat until 4,800.

Thanks to improvements in the engines, aero, and weight, both models will be more fuel-efficient than ever. BMW touts improved underbody sealing to reduce drag. The kidney grill features active shutters to help channel air. BMW's Air Curtains adjust and manage the flow of air for the engine, brakes, and A/C to balance need and efficiency.