Alfa Romeo, a brand synonymous with sports cars that combine beautiful Italian design with historically dodgy reliability, now makes a crossover. The Stelvio is named after what is quite possibly the best driving road in the world, and the automaker would have you believe that it is the most purely focused driver's ute in the world.

To that end, the Stelvio boasts a perfect 50/50 front-to-rear weight distribution, a fast 12.0: 1 steering ratio, and an all-wheel-drive system that's tuned to send 100 percent of the engine's power to the rear wheels whenever possible. All of those bits add up to an SUV that's genuinely fun to drive on winding roads. Think of the Stelvio as an Alfa Romeo Giulia with a suspension lift kit that puts you 2.5 inches higher off the tarmac. Yes, those stilts mean the crossed-over Alfa isn't quite as sharp as the Giulia, but the Stelvio isn't at all dimwitted. It's a true Alfa Romeo, in spirit and in execution, right down to its standard carbon-fiber driveshaft.

The Stelvio shares its 111-inch wheelbase and its double-wishbone front and Alfa Link rear suspension systems with the Giulia. That's not to say that the Stelvio drives as well or looks as good as the Giulia. The crossover is 2 inches longer and 8.9 inches taller than the sedan from which it was born. 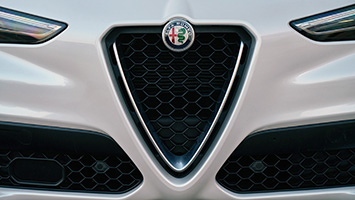 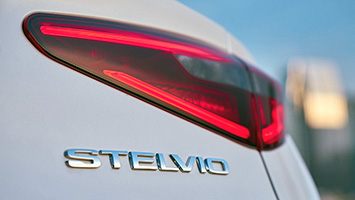 We got the feeling that we were sitting on top of the car's chassis instead of within it, which is due entirely to the high seating position that American drivers are so fond of. And whereas the Giulia wears its sheetmetal like a slinky little black dress, the Stelvio's Scudetto front fascia and Trilobo air intakes are stretched over a much larger frame and its sides are sculpted in a more masculine way.

Still, the Stelvio is an attractive beast, inside and out. It's unmistakably Italian, which is to say well-tailored with an impeccable form that influences but begrudgingly follows function. Leather seating surfaces are standard. From the driver's seat, the dashboard is dominated by two binnacles housing the tachometer and speedometer. In between is an LCD display that shows a bunch more relevant information. A second screen in an exaggerated widescreen format houses the bespoke infotainment system from Magneti Marelli. That LCD's unique shape makes it look smaller than the Stelvio's competitors, especially as its pinched height makes the backup camera image appear pretty small. Apple CarPlay and Android Auto will eventually come standard but aren't equipped on initial launch models.

Perhaps our favorite part of the Stelvio's interior is its steering wheel. It's a flat-bottom piece, with two thin spokes on either side and a pair of aluminum-look bottom spokes. It took us a moment to locate the start/stop button – it's on the wheel, like a race car. Nice touch. If properly equipped, a pair of column-mounted shift paddles complete the racy cabin.

There's a good amount of space inside the Stelvio. With the driver's seat in position for a six-footer, another six-footer can slide in behind with reasonable comfort, though there isn't a ton of room for their feet. And don't expect to put three adults in the back seat, as the center console leaves very little legroom for the middle passenger. There's 18.5 cubic feet of space behind the back seat, which is on the small side in its segment. Fold the seats flat, though, and 56.5 cu-ft is available. 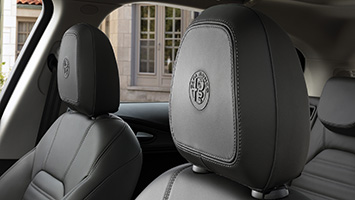 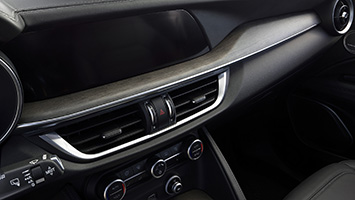 We're fond of Alfa's all-aluminum 2.0-liter turbocharged four-cylinder engine. Its 280 horsepower and 306 pound-feet of torque are best-in-class, as are its claimed 0-60 time of 5.4 seconds, 144-mile-per-hour top speed, and EPA rating of 28 miles per gallon on the highway. If that's not enough gumption for you, wait for the 505-horsepower Quadrifoglio in early 2018, which Alfa promises will be the fastest production SUV ever to run the Nurburgring.

Piloting the Stelvio through sweeping curves is a blast, thanks to its excellent steering feel and quick-shifting transmission. Up and downshifts of the eight-speed ZF automatic transmission fire off in less than 100 milliseconds, but never send shudders through the wheel to the driver or upset the chassis. The ride is comfortable yet taut with either the 19-inch or 20-inch wheels of our test cars. Dynamic mode tightens up the car's reflexes, and is probably where we'd leave the car for most driving duties.

Bringing the 4,044-pound Stelvio down from speed are 13-inch rotors and four-piston Brembo calipers at the front and 12.5-inch, single-caliper discs at the rear. We found the brake pedal easy to modulate (though some of our fellow testers complained of a lack of feel), and ultimate stopping power felt strong. Alfa says the Stelvio can tow up to 3,000 pounds.

Take a look at the videos below to see a few of the trim levels Alfa Romeo offers for the Stelvio, and stick around to see some of the optional wheels. Note: the narration in the video says "over 300 horsepower," which is incorrect. It should say over 300 pound-feet of torque. 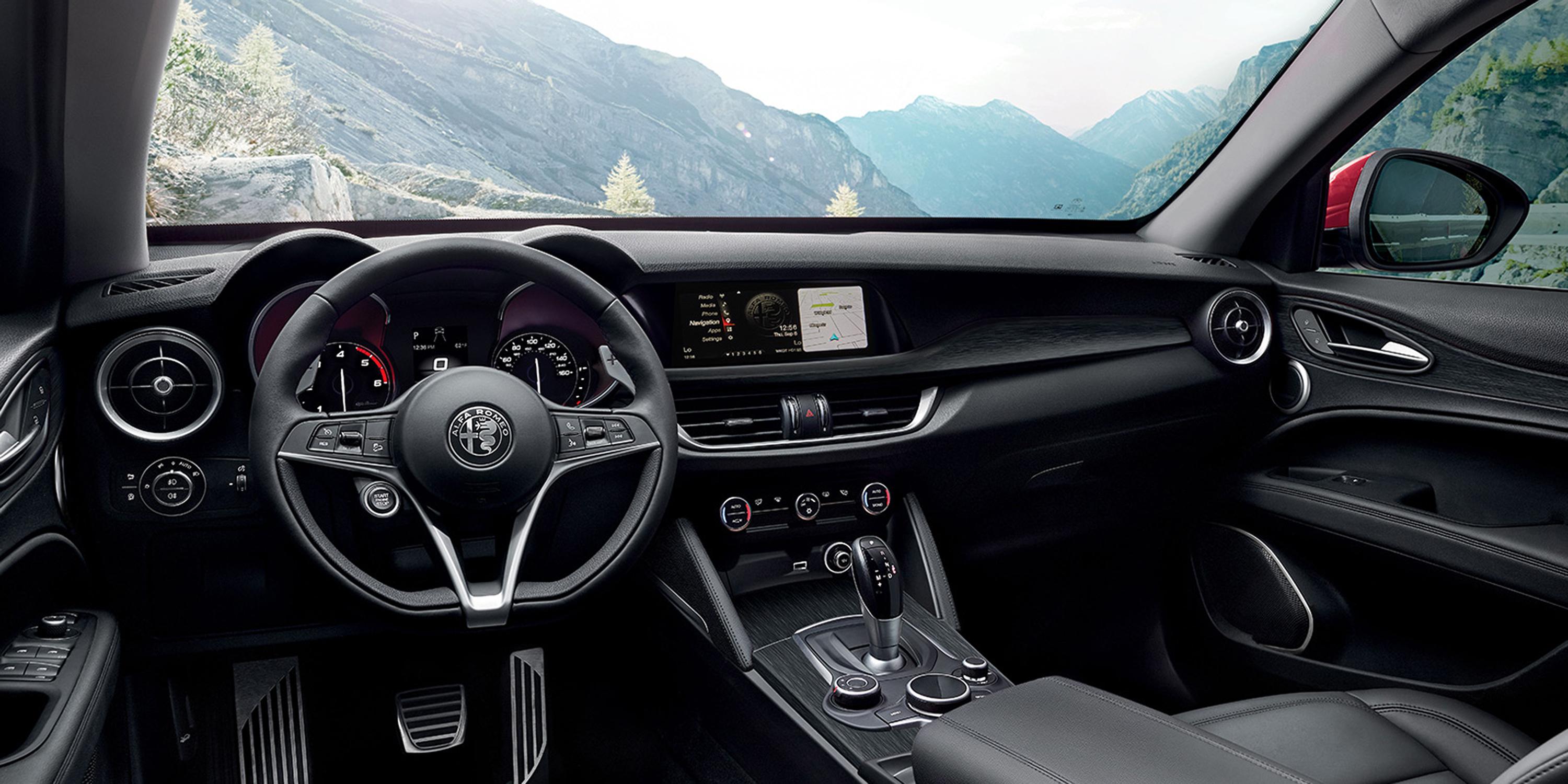 Alfa Romeo does not expect any of its customers to take the Stelvio off-road, so there are no special terrain management systems in the Stelvio. Just as well. This is clearly a road-biased utility vehicle, and we'll take craftsmanship over faux muddy pretensions. We do have to wonder why there's a fake aluminum-look skid plate at the rear, then.

One Stelvio we drove occasionally exhibited some light but noticeable surging from the engine in third and fourth gears under moderate steady-state throttle. Our test cars were pre-production models, though, and other Stelvios didn't surge at all. We'd expect such issues to be resolved by the time they end up in customer driveways, but hey – it's Italian, so who knows?

It all comes at a reasonable price. A base 2018 Stelvio runs $42,990 and is equipped with all-wheel drive, leather, a backup camera, and keyless entry. Step up to the Sport model with its paddle shifters and sweet 19-inch Dark 5-Hole wheels for $44,790. A loaded Ti Sport model with desirable options like a dual-pane sunroof, navigation, Harmon Kardon audio, and all the available active and passive safety systems comes in at a competitive $53,440.

We tested Alfa's crossover through a mixture of torrential downpour and calm skies, and felt the standard all-wheel-drive system feeding power front to rear and side to side in search of good traction. Throughout, the Stelvio never put a wheel wrong. Its handling inspires far more confidence than its high-roofed looks might make you expect. Whether or not it's better than the Porsche Macan and Jaguar F-Pace, the current champs of driving dynamics in the Stelvio's segment, we can't say for certain. But the Stelvio certainly fits in those upper echelons of style and performance. 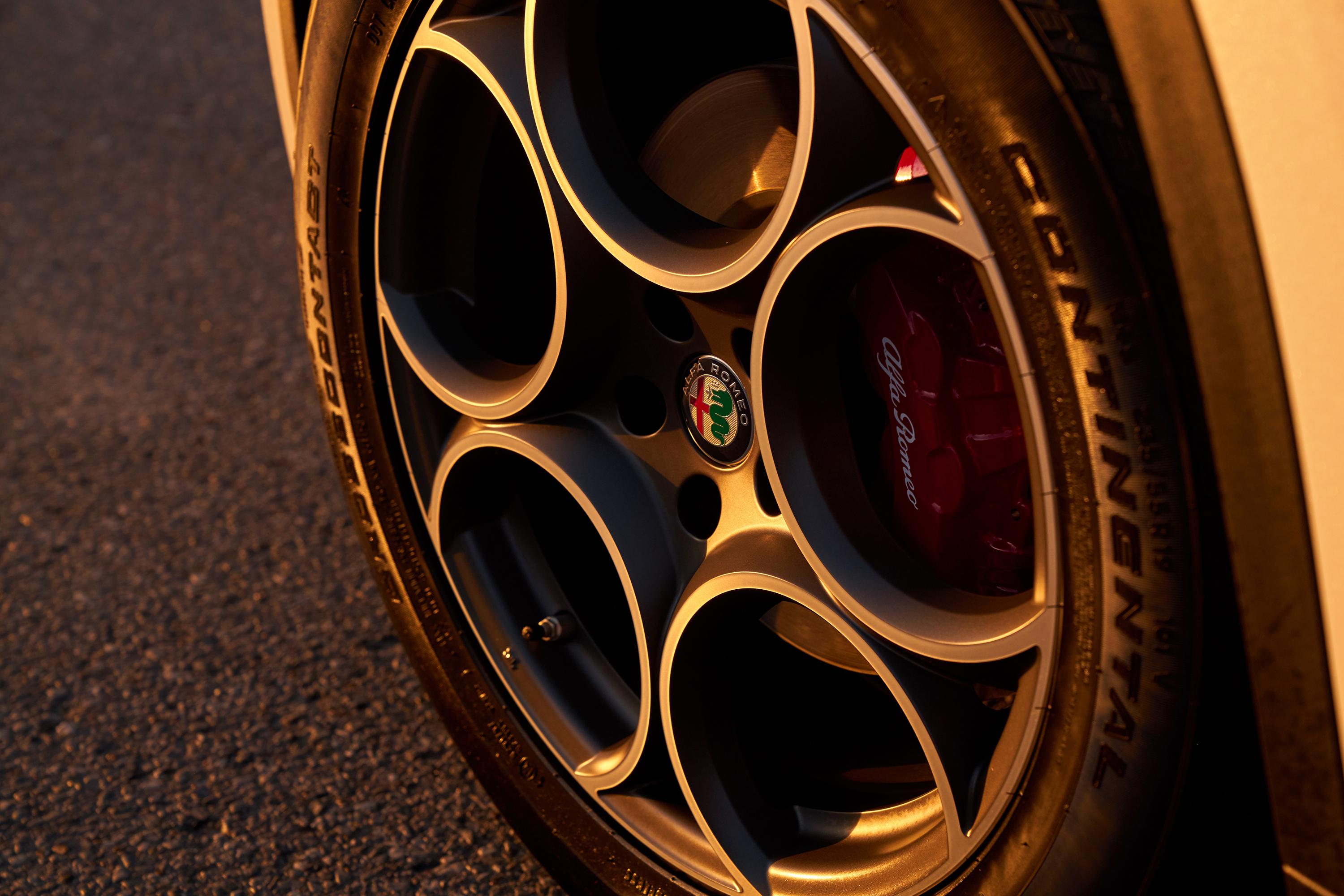