Hearse stolen in Texas, body thrown to side of the road

Jason Marker
A lot of our strangest stories come from Florida. The term " Florida Man" exists for a reason, right? Not to be outdone, Texas has knocked it out of the park with a story about two young scofflaws, a stolen hearse, and a mistreated corpse.

According to KBTX, a contractor working for Daniel & Sons Funeral Home in Bryan, Texas, pulled into a convenience store for a quick refreshment while making his rounds on the morning of May 19. He left his hearse in the parking lot - in this case, not the ceremonial kind of hearse used at funerals, but an unassuming beige Chevy Suburban used for transporting bodies to the funeral home. It was unlocked, with the keys in the ignition, and with a body in the back. What could go wrong?

While the driver was in the store, police say a young woman named Tanya Albrecht came along and decided to take it because, hey, free Suburban!

Around noon, a Brazos County sheriff's deputy spotted the stolen Suburban near Edge, an unincorporated community northeast of Bryan. BCSD pulled the Suburban over and found Albrecht inside, along with probable partner in crime Adam Crow. The pair were arrested and charged with unauthorized use of a motor vehicle. Albrecht also faces a charge of abuse of a corpse.

And what about that corpse? Well, the BCSD found it dumped unceremoniously along a backroad in a heavily rural part of Brazos County, still strapped to a stretcher. KBTX said the body, which has not been identified, had been picked up that morning from the Travis County Medical Examiner's Office.

And of course, this was the remains of a person - somebody's loved one - treated in the most undignified way. 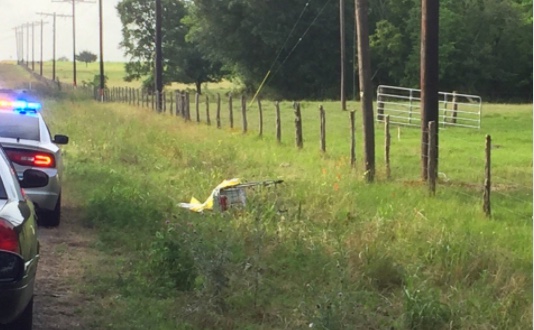