The strange and unlikely story of 100 identical Ford Mustang convertibles

A Christmas gift guide gone wrong, and a whole fleet of misfit toys. 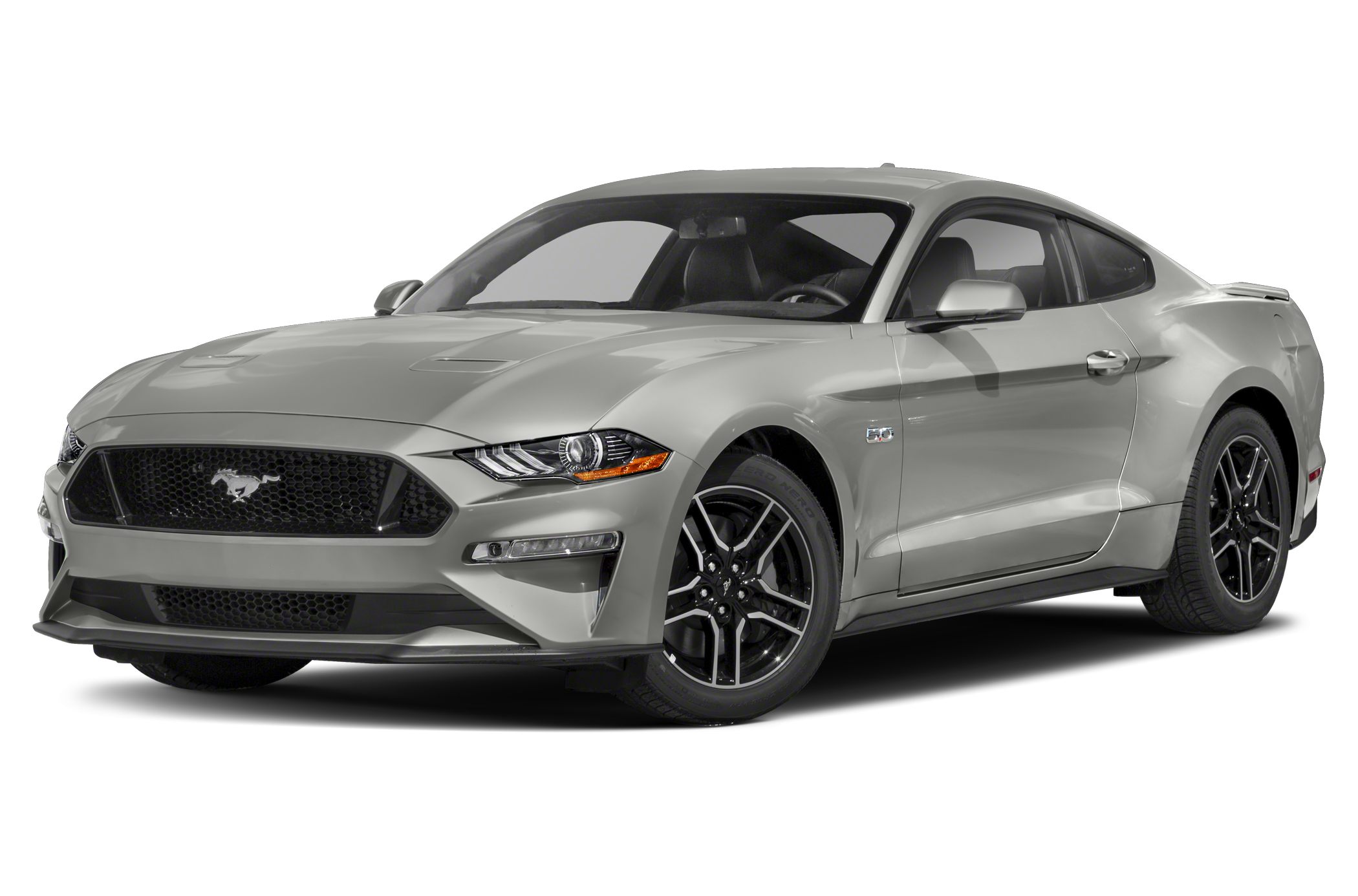 Update: The online listing for the Mustangs has been removed from the Neiman Marcus website.

In early February, we stumbled on a local Ford dealer with 51 Deep Impact Blue 2016 Ford Mustang GT Premium convertibles sitting on its lot. And that's not the strangest part of this story. Not remotely.

Nor is the fact that this dealer has an employee named Frank Sinatra. Mr. Sinatra filled us in on some of the details of the story of the mouldering blue Mustangs, and we've pieced together the rest. It starts with a department store and ends with a bunch of unsold convertibles.

Those 51 matching Mustangs were once part of a group of 100. The dealer has been slowly selling them off; two are left, and according to dealer-tracking site Carjojo, they have been on the lot for 683 days as of May 1 – nearly two years. The cars are at Russ Milne Ford in Macomb, Michigan, and they're listed for about $10k under original MSRP. They're in the dealer's used section, although both show odometer readings of only five miles and have never been titled. Their VINs are sequential, in case you're looking for bookends. 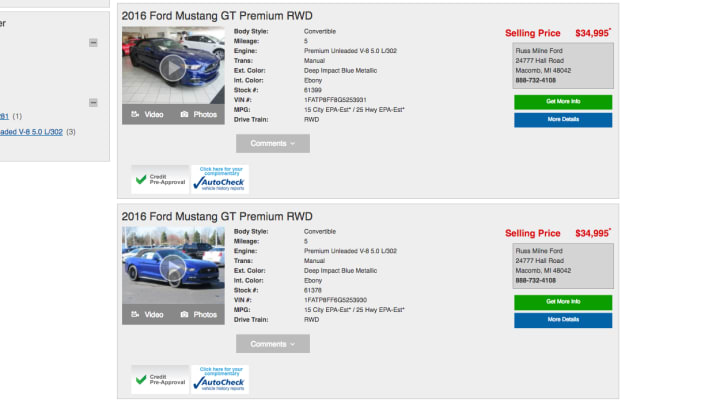 You're now wondering, as we were, why a dealer would need or want 100 matching manual-transmission GT convertibles. The answer has to do with the 2015 Neiman Marcus Christmas Book. You may be familiar with the limited-edition cars sold through the annual holiday catalog – stuff like Hennessey Vipers, Astons with special paint, and this past year's glittery Infiniti Q60. They're generally regular-production cars modified with unique paint and other touches, offered in limited quantities and often coinciding with a model's introduction. For 2015, it was something a little different: a Neiman Marcus Limited-Edition custom Mustang with a supercharged, 700-horsepower 5.0-liter V8 and an elaborate body kit. A total of 100 were to be offered. Neiman's limited-edition Christmas cars tend to sell out in a matter of hours or even minutes. Not this one.

There were some problems. The original Neiman Marcus listing described the car as having all-wheel drive. Being a Mustang, of course, it did not. We immediately questioned the description and soon found that this was, in fact, a rear-drive Mustang like all the others before it. That may have turned some people off, especially if they were reading the printed version of the catalog and called to order a mythical all-wheel-drive pony car. The price may have also had something to do with the relative lack of takers: $95,000 for a custom-painted Mustang with a roll hoop, a hard tonneau, wheels, tires, exhaust, and lowering springs, plus a two-day Ford Racing School course. That's a roughly $40,000 premium over the base car. 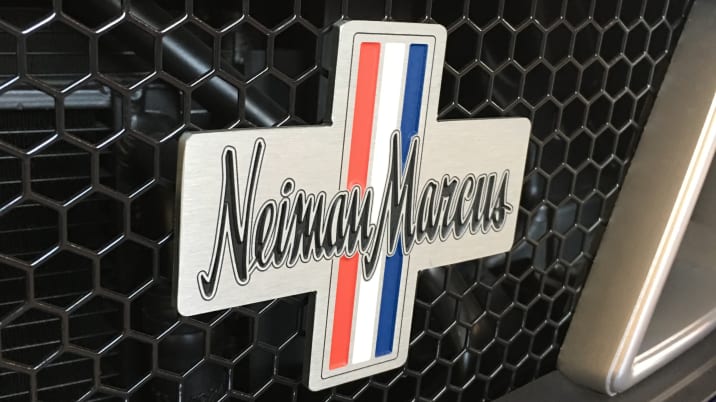 It's not clear exactly who was responsible for the conversions or how Russ Milne Ford was originally involved. Neiman's catalog entry mentions SMC Productions LLC as the seller, and the body kits were sourced from Classic Design Concepts in Troy, Michigan. Most of the parts, aside from the tonneau and roll hoop, match those included in CDC's Outlaw kit for 2015+ Mustangs. Until recently, SMC Productions had a one-page website that basically mirrored the description from the Neiman Marcus catalog, but the domain registration has since expired. We emailed the address on that page looking for answers but did not hear back.

Neiman Marcus did not respond to a request for comment on the number of Mustangs sold through the Christmas book, but the leftovers show that not all 100 cars were converted. Given that 51 were on the lot in February 2017, the maximum is 49, and we suspect the total is much lower. That's perhaps good news for anyone who bought one. Hello, Barrett-Jackson Scottsdale 2046. 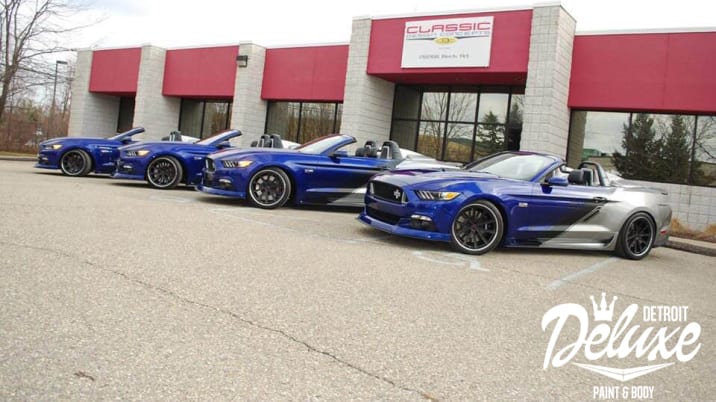 There is evidence of four coexisting in photos from Detroit Deluxe (taken in front of Classic Design Concepts). One of those could be the prototype used in the promotional shots, so the minimum number is three or four.

A photo taken in Cross River, New York, and posted on Flickr suggests that there's at least one registered in the wild. There may be more collecting dust in garages or hermetically sealed in those air bubble things. We expect to hear from some of those owners now that this story is out.

If you missed out, Frank Sinatra says Russ Milne Ford will make you one if you like, or just slap the supercharger on one of the two it has to make a less showy high-power Mustang convertible. The dealer also has the prototype for sale. Unlike the others, it's a 2015 model, and it sits in the showroom with a price tag of $99,995. It has been listed several times on eBay with a Buy It Now price of $99,995 and an opening bid of $50,000. No winner yet. 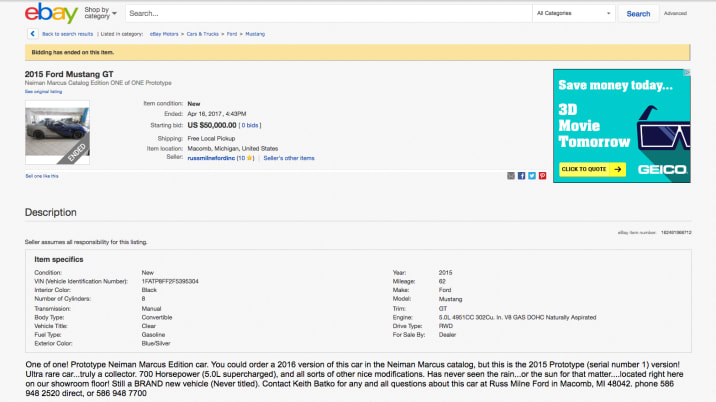 We were told that the dealer is being reimbursed by Ford for the losses on the cars, but Ford's public relations team says this is not true. There is also supposedly a lawsuit of some sort between the dealer and those responsible for marketing the cars. We were unable to find any details about pending litigation.

Ford had no comment on the project or any litigation. A spokesman instead distanced the company from the cars, emphasizing that these vehicles were modified by a third party after leaving the factory.

So that's what we know, which makes for a weird enough story. If you have any more details to add, and especially if you bought or considered buying one of these cars, please let us know. We have a feeling this story gets stranger.