Does the 2017 Honda CR-V have across-the-board appeal?

Ruth Manuel-Logan
The compact crossover segment has exploded, quickly becoming a segment that is not only growing but also now attracting folks from all walks of life. Honda is certainly not at the tail end of this ballooning automotive trend; they are in fact, leaders with their bona fide top profit generator, the CR-V. Now marking its 20th anniversary, does the 2017 compact crossover have across-the-board appeal?

The Japanese automaker kicked the CR-V's former design to the curb and now, the 2017 version sports a more striking design language that certainly caught my eyes. It was clear Honda needed to take this compact's look a step further aesthetically—more muscular/athletic on the outside, sleek high-mounted headlamps, more aggressive fascia, new dual exhaust outlets and a tad more chrome bling. The vehicle even looked bigger and that's because it is! Stepping into it, there appeared to be extra ground clearance, which is stellar news for those who are not vertically challenged like moi. One trademark design feature of the CR-V that has not been given the old heave-ho is the high-mounted taillights. 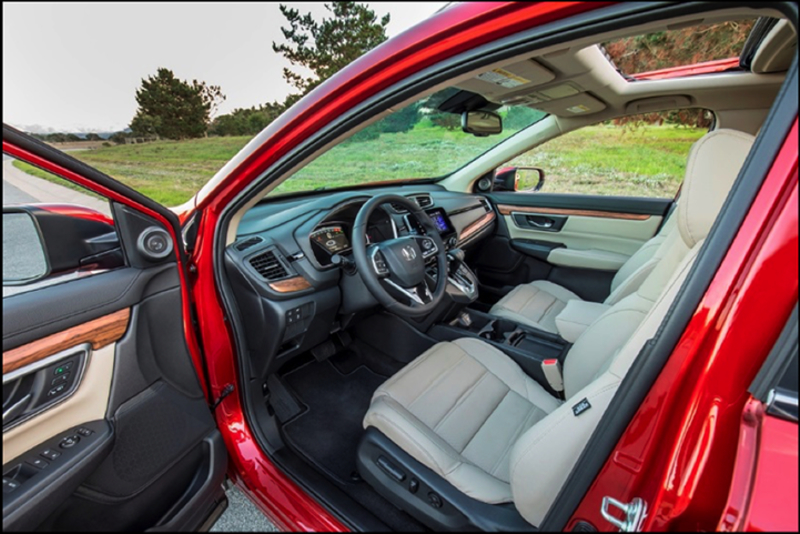 Giving the CR-V's innards the once-over, it's apparent the bar has been raised as the environment now has a high-quality, real visually appealing look. Poof be gone went the vehicle's interior econobox-looking hard plastics and rather austere overall feel and it has now definitely received its fashion moment. Many of the CR-V's cabin surfaces were soft to the touch. The tilt/telescopic steering wheel is smaller, more contoured and these hands loved the change. The dash has a likable modern design flow. As I played with the crossover's infotainment controls, I found them to be ergonomically comfy and certainly, user-friendly. The 7-inch touchscreen (EX trim and above) with Apple CarPlay and Android Audio, satellite radio, and upgraded multi-angle rearview cam were thankfully, not fussy (the entry model has traditional buttons and knobs). I didn't need to squint at the display menu or hurl obscenities at the voice-activated navigation system (standard on the Touring trims and available on the EX-L) for not interpreting my very eloquent commands. There were more than enough cup holders in the CR-V and another cool find was that this stasher could hide a small purse and friend's fanny pack (don't judge) in its reconfigurable front center console's deep storage well.

The overall five-passenger seating in the CR-V is road trip comfortable and the head and legroom are more than generous for most body types. Seating in the rear is especially spacious for a vehicle in this compact segment. Honda added an extra two inches of rear legroom, so not once did my 6'4" man-child whine about feeling cramped. The cargo space in the CR-V has increased by 2 cu ft. with the seats raised (39.2 cu ft.) and about 5 cu ft. with the seats lowered (75.8 cu ft.) which this weekend warrior, do-it-yourselfer really appreciated when hauling my Home Depot load home.

The CR-V comes in four trim levels—LX, EX, EX-L and Touring. Driving the CR-V was fun (EX trim Touring AWD, 1.5-liter turbo four-cylinder offers 190 horses, 179 lb-ft of torque); it was peppy (spirited acceleration), nimble and very responsive. When the road got twisty and the compact was thrown into hard corners, I felt no real body roll. The driving experience was truly engaging and even during slick weather, I thought the CR-V was a pretty prime performer. At the pumps, I didn't have to tap out my gas card with this one; the CR-V is no lush at 32 highway/26 city.

Honda has certainly taken a nice step forward design-wise with their 2017 CR-V. However, don't be fooled by its compact category. The CR-V can cater nicely to a growing family or to someone who's flying solo so, in my book, the hot crossover has one-size-fits-all appeal on definite lock-down!