So far, we've only seen the Corvette ZR1 convertible briefly in video. This time, one of our spy photographers caught it in still images while it was at the GM proving grounds. The car seems to have the various tell-tale signs of the ZR1. You can make out the edges of the large vents the car will have in the front bumper. The rear wheels are also the split 5-spoke units that aren't currently available on other models, and will probably be exclusive to the ZR1.

Also at the back is the smaller of two rear wings we've seen on ZR1 prototypes so far. It's also the only wing we've ever seen equipped with the convertible. On coupes, both the small wing and much taller and wider one have been fitted. While it could be that we just haven't been lucky enough to see a soft-top with the tall wing, it's also possible Chevrolet won't offer the tall one on the convertible at all. It could be part of a coupe-exclusive track package. This wouldn't be unreasonable since people hunting the fastest lap time will probably opt for the coupe anyway. There could also be aerodynamic reasons not to offer the tall wing on the roadster.

Otherwise, we expect the convertible to use the same engine as the coupe, which will likely be a more powerful version of the supercharged LT4 V8 found in the Z06. It will probably make at least 700 horsepower, which would give it bragging rights against the Dodge Hellcat, and a sizable bump compared with the Z06. Naturally, that extra power will be supported by bigger brakes and better suspension. Also be sure to check out our post with everything we know about the ZR1 for more photos and info. 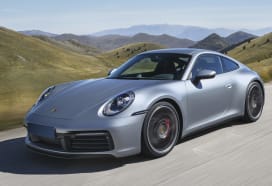